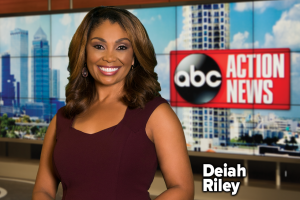 Deiah is an award-winning journalist who’s been helping wake up the Tampa Bay area for more than 16 years.

She is a founding member of Women for Gulfside Hospice and Palliative Care, which provides compassionate, quality care to individuals and their loved ones as they face life-limiting illnesses.

Deiah is one of the most requested emcees, speakers and hosts in the Tampa Bay area. She has served as keynote speaker for Florida Hospital's Women's Health Symposium and as a panelist for the University of South Florida's Women's Health series.

One of the highlights of her career was being selected to serve as Grand Marshal of Tampa's annual Dr. Martin Luther King Junior Parade.

She’s also been recognized by the Tampa Bay Association of Black Journalist as a Legacy Award winner.

The United Negro College Fund honored Deiah for her commitment as a leader and influencer in Tampa's African American community. Mentoring students is something Deiah takes pride in. She believes we all have a responsibility to use our connections and influence, to open doors for all those who come after us.

Deiah is also a “hands on” mom to her daughters, Riley and Ryan.

She’s “team mom” for their travel volleyball teams and on the PTA at their school.

In her spare time, she loves to cook. Deiah spearheaded the successful, "Dinner on a Budget" weekly series on ABC Action News where she shares and prepares her favorite recipes. Deiah also likes to stay active. She's a runner and cyclist. Deiah ran the Gasparilla Half Marathon in 2017.

Deiah and her husband, Dave are proud to call the Tampa Bay area home.