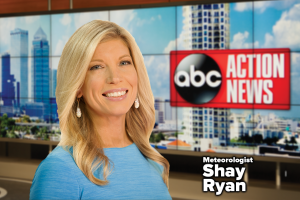 Meteorologist Shay Ryan is returned to her home state of Florida. She grew up in a suburb of Ft. Lauderdale and received her Bachelor's degree in Telecommunication from the University of Florida. She has also earned a Master's degree in Geoscience with a concentration in Broadcast Meteorology from Mississippi State University. Shay is a member of the American Meteorological Society and has earned the AMS seal of approval.

Shay was a weather anchor for Fox 5 News in New York City and Fox News Channel. She has extensive experience covering severe storms, record flooding and heat waves during her time as a meteorologist in New York, Michigan, Georgia and Mississippi. While in Savannah, she covered Hurricane Floyd and took part in the largest peacetime evacuation in U.S. history. Staying at the Emergency Management Shelter for 36 hours, Shay reported on key safety updates and the tracked the storm's path.

Other than being a self-proclaimed "weather geek," Shay spends her free time enjoying the outdoors with her two young children and husband as much as possible. She loves the water and every activity on it or in it! She loves to cook, paint and is a home improvement enthusiast. She is excited to be back in Florida, where she was raised, and looks forward to raising her own children here in Bay area.