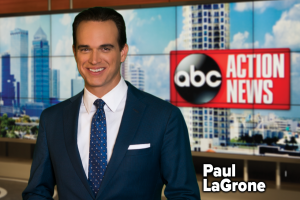 Paul LaGrone is the weekday 5:30pm anchor for ABC Action News. He also reports for the 5pm and 6pm newscasts. Paul is a true Tampa Bay local. He was born in Lakeland, grew up in Dover, and graduated from Plant City High School. He went on to graduate from the University of Florida.

So far, Paul's career has taken him to newsrooms in North Carolina, South Carolina and Florida. He was a morning anchor in at WPBF in West Palm Beach, an anchor/reporter at WBBH in Fort Myers, a nightside reporter at WRAL-TV in Raleigh, and he started his career reporting at WFXB in Myrtle Beach, S.C.

In 2003, Paul spent a month in Iraq and Kuwait, covering the war alongside the 82nd Airborne Division. He spent two weeks in the middle of the Sunni Triangle where hostilities against U.S. troops were just starting to intensify. He took viewers inside one of Saddam Hussein's palaces and ventured alongside soldiers as they uncovered an underground bunker full of Iraqi intelligence.

Paul has won three Associated Press awards recognizing his writing and investigative work. In 2007, Paul won a Regional Edward R. Murrow award for an investigation that uncovered child pornography on charity-donated computers. In 2004, Paul was nominated for an Emmy for “Best Spot News Coverage” in a case where he and his photographer helped find a missing boy. Paul has also written and produced segments that hold politicians accountable for what they say. His political journalism was nominated for an Emmy in 2015.

From covering tropical storms in Florida and North Carolina, to reporting from the epicenter of the 2000 Presidential election controversy in Tallahassee and broadcasting from the frontlines of the Iraq War, Paul’s journey in journalism has taken him to major news events around the state and around the world.

Paul is excited to be back home in Tampa where both sides of his family live. When he’s not in the newsroom, Paul enjoys spending time with his wife ,Katie, and their two boys, Jacob and Lucas.