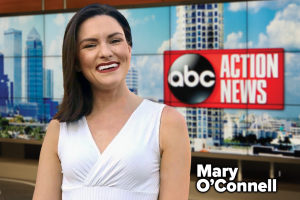 Mary is a reporter at ABC Action News, joining the team in March 2020. She’s a native of Wisconsin, growing up right in between Milwaukee and Chicago.

Before coming to Tampa, Mary spent three years as a reporter at WVTM13 in Birmingham, Alabama. While there, Mary covered a wide range of stories, from Alabama’s controversial abortion law to a deadly school shooting and reported on hurricanes and tornados affecting the state. Mary has a passion for stories dealing with education, often speaking to teachers, administrators, and students on topics that impact the community.

Mary also worked as a reporter and anchor at WJFW in Rhinelander, Wisconsin. She’s a graduate of Syracuse University’s S.I. Newhouse School of Public Communications. While studying at Syracuse, Mary interned at the 2014 Winter Olympics in Sochi, Russia, as well as spent two summers interning with CBS News in the Investigative Unit in New York City and at Today’s TMJ4 in Milwaukee.

When she’s not busy at work, Mary enjoys traveling as much as possible, being fortunate to visit more than 20 countries. She can’t wait to explore the Tampa Bay Area and Florida! If you have any suggestions, a story idea, or would like to say hello, feel free to email mary.oconnell@wfts.com or connect on social media.