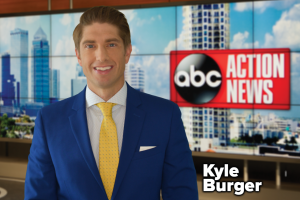 Kyle Burger is a sports anchor at ABC Action News. He joined the team in March 2020.

Before arriving in Tampa Bay, Kyle spent several years in Alabama working at WVTM-TV in Birmingham and WAAY-TV in Huntsville. He was fortunate to cover so many of big time college football games while traveling with the Alabama Crimson Tide and Auburn Tigers. He was on the field for iconic college football moments including Auburn’s “Kick Six” against Alabama, and Tua Tagovailoa’s “2nd & 26” pass that won the Crimson Tide another national championship.

While in Birmingham, Kyle was nominated for four regional Emmy awards, and collected several Alabama Broadcasters Association awards for his sports reporting.

Kyle also had the opportunity to cover the Florida Gators national championship run in 2006 while he worked at WMBB-TV in Panama City, Fla.

His first on-air job was at WDNN-TV in Dalton, Ga.

Kyle is a native of Conyers, Ga. He attended Georgia College & State University in Milledgeville, Ga., and earned a degree in Mass Communication. While in college he interned at WSB-TV in Atlanta, and at WMAZ-TV in Macon, Ga.

In his spare time, Kyle enjoys spending time with his beautiful wife, Kenya, and their Yorkies Oscar and Jonesi, going to the beach, photography, working out and pulling for his Atlanta sports teams.