Polk County man shares video of his own arrest 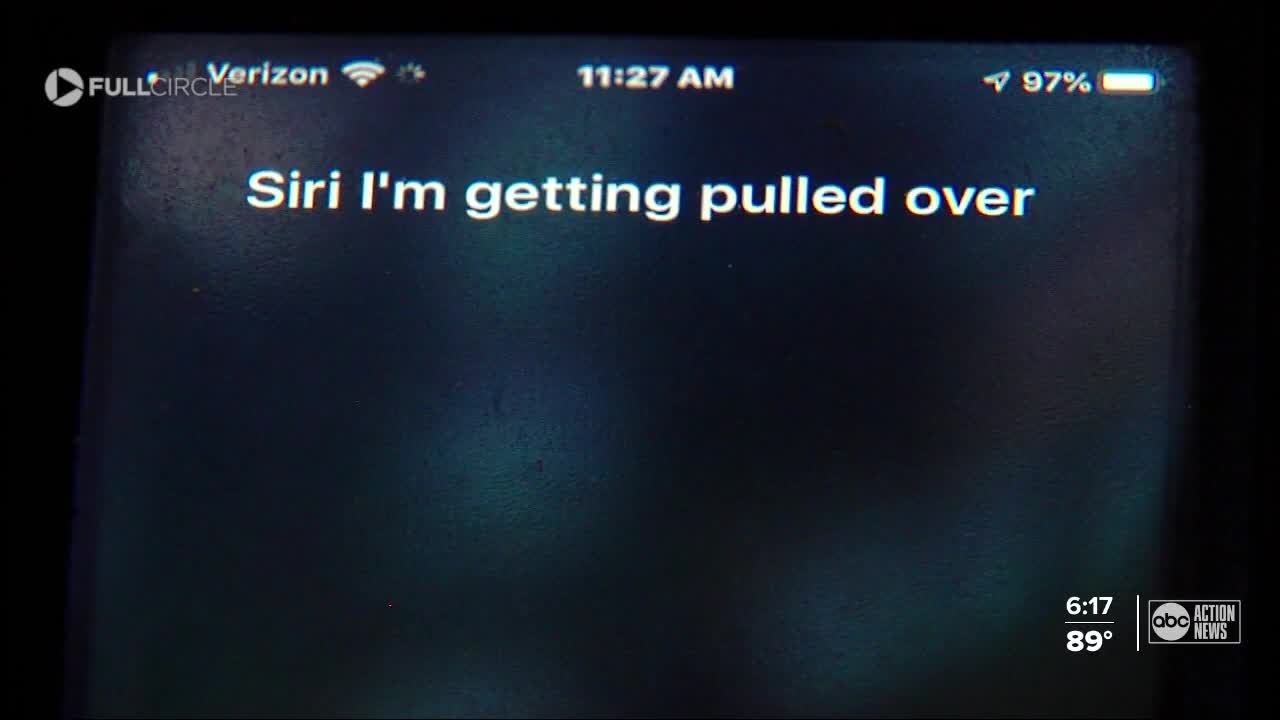 A Polk County man believes his arrest was in retaliation for recording a deputy punching another man in handcuffs during an arrest. 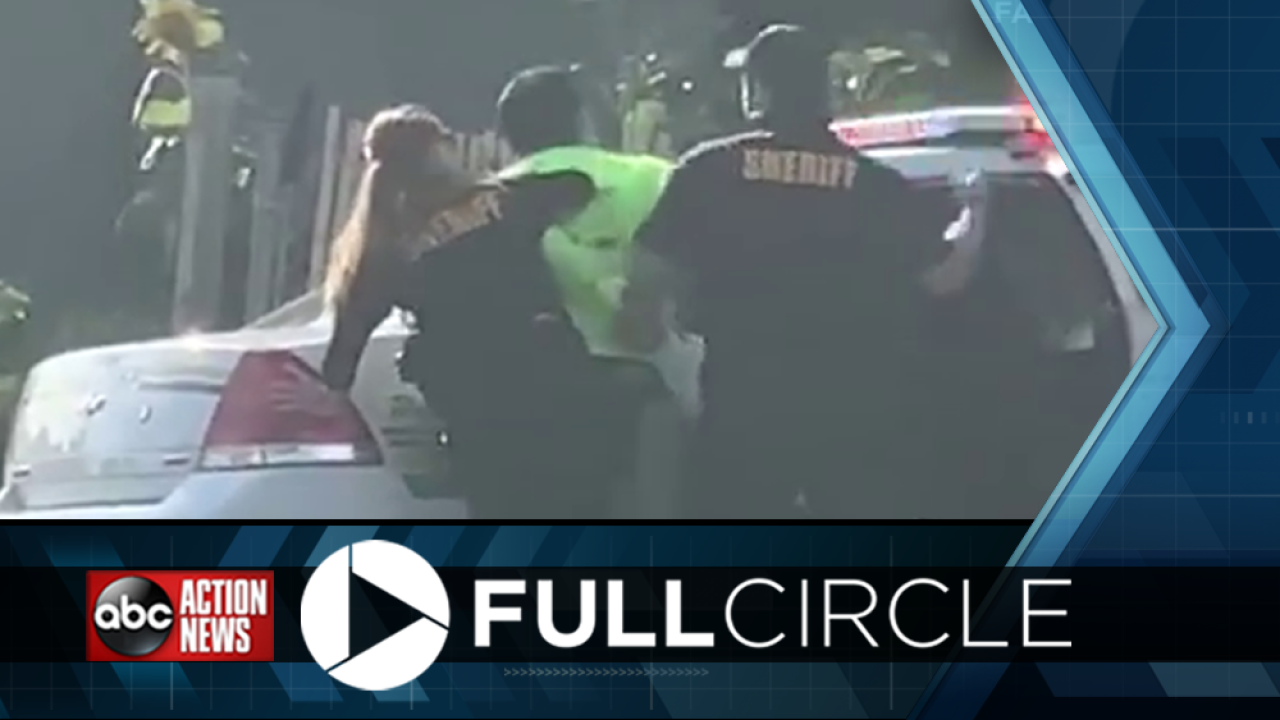 POLK COUNTY, Fla. — A Polk County man shared his story and the video he recorded from his own arrest with I-Team Investigator Kylie McGivern for the first time.

Unique Occena told the I-Team he believes his arrest was in retaliation for recording the video of a Polk County deputy punching another man in handcuffs during an arrest.

On May 6, Occena recorded video on his cell phone of the arrest outside of his home. The roughly eight-minute video gained thousands of views on Facebook. The video showed people fighting before two Polk County deputies arrived and handcuffed a man later identified as Fernando Jimenez.

Occena responded, “I got you.”

One of the deputies then punched Jimenez twice while he was in handcuffs.

Sheriff Grady Judd said the man spat at one of the deputies during his arrest, something Jimenez denied in an interview with ABC Action News. An administrative investigation into the incident against the deputies involved remains ongoing.

The day after Occena posted the video on Facebook, the Polk County Sheriff’s Office told the I-Team that 12 deputies, including a K9 officer, surrounded Occena's home.

Sheriff Judd has denied the arrest was in retaliation but acknowledged deputies ran Occena through the warrant system after he posted the video of a deputy punching a suspect and found a warrant for Occena’s arrest.

The Polk County Sheriff’s Office told the I-Team they were interested in interviewing Occena because he was a witness to the fights from the day before. During their investigation, they discovered an outstanding felony warrant from the Lakeland Police Department.

The warrant was for aggravated battery in April, after Occena got into a dispute with a man who was in a relationship with the mother of his child, according to police records. That man was allegedly hit with a crowbar.

Occena acknowledged to the I-Team he has a past record, which includes assaults and burglaries, according to Polk County records, but said deputies treated him unfairly.

When Polk County deputies arrived at Occena’s home on May 7, Occena started recording and posted two Facebook Live videos of the minutes leading up to his own arrest.

In one of the videos, Occena said, “Facebook, I am scared right now. I have Polk County Sheriff surrounding my house.”

In his video, deputies can be heard telling Occena repeatedly to come outside, as he pleaded for anyone watching to come to his home.

Occena told the I-Team he didn’t want to go outside because he was scared.

“Come over here off of Chestnut and record these officers. I don’t trust them. They are mad about this video,” Occena said, referring to the video he recorded of a deputy punching a suspect the day prior.

In the video, deputies are then seen coming through Occena’s front door. Occena asked what he had a warrant for.

The Facebook Live then went to black on-screen, but the sound of what was happening continued on the streaming video.

The sheriff’s office told the I-Team in an email, “Our deputies were professional, patient, and respectful. If he is alleging any inappropriate use of protective action, we categorically reject that characterization.”

When the I-Team met Occena at a protest in Lakeland, he said he saw himself when he watched the video of George Floyd’s killing in Minneapolis.

“It hurts because I felt the same way,” Occena said of his own arrest. “I really felt like they was going to take my life that day.”

Occena told the I-Team, “There’s no reason why they should have came to my house to do what they did like I was a mass murderer.”

The sheriff’s office confirmed Occena’s video is the only footage of his arrest. That’s because Polk County deputies do not use body cameras.

Sheriff Judd declined multiple interview requests but his spokesperson directed the I-Team to his recent statements arguing against body cameras.

At a news conference in June, Sheriff Judd said body cameras don’t point at deputies. They point to the public.

Holding up his phone, Judd said, “Everybody that’s got one of these has got a camera. You take your own pictures. If you want pictures, that way it’s pointed at us and not pointed at you.”

Judd ended his point listing the reasons he’s opposed to body cameras by telling reporters, “I’m not changing my mind.”

Black Lives Matter Restoration Polk is among those pushing for body cameras in Polk County.

The group’s president, Jarvis Washington, told the I-Team, “We do not need a sheriff that doesn’t reflect the concerns of the community. #NoCamerasNoJudd.”

Videos from recent protests and law enforcement interactions with the public have reignited the debate over police body cameras. As videos empower anyone with a cell phone, the push for officers to record themselves on the job continues to grow.

Some, like Pinellas County Sheriff Bob Gualtieri, agree with Sheriff Judd that body cameras are not the answer.

“I’m not inclined to use it, and I don’t think it’s going to solve the problem that people are looking for it to solve,” said Gualtieri.

But other Tampa Bay area agencies are now fast-tracking body cameras to their officers.

“The landscaping of policing has changed dramatically in the last five days. If there’s a police officer in the City of Tampa that does not want a body-worn camera, then I suggest you turn your badge in because we cannot have that anymore,” Chief Brian Dugan said publicly following George Floyd’s death.

Weeks later, Hillsborough County Sheriff Chad Chronister told the Board of County Commissioners he and his deputies wanted body cameras as much as the public.

“I think there’s an outcry from our public to be even more transparent and as your sheriff’s office, we want to be transparent. We know the trust through transparency that body-worn cameras provide,” said Chronister.

St. Petersburg Police Chief Anthony Holloway told the I-Team for him, body cameras are about giving people the police accountability they want.

As a Black police chief, Holloway said he sees and hears both sides.

The chief said he’s been considering body cameras and the budget questions that come with them over the past four years and finally began a trial program in June.

As for the critics who say officers could just turn a body cam off, Holloway said, “To turn it off, I have to press it three times. So it’s not like it happened by accident."

Holloway said cameras are just one element in the overall culture of a police department.

“This is not a silver bullet now. Just because I’m wearing this body camera, doesn’t mean that everybody now in the city of St. Petersburg is going to say, ‘Oh, we trust what the police department is doing.’ All it just says is that we’re capturing so that you can see all the good work that we’re doing and what we said happened, did happen.”

'Hey Siri, I'm getting pulled over'

For those who don’t trust body cameras to keep recording, or for the footage to be readily available, a smartphone shortcut is gaining popularity.

How it works is, before the interaction with police, the user can say, “Hey Siri, I’m getting pulled over.” The phone screen then goes black and any music playing is silenced, putting the phone on “Do Not Disturb.” The phone’s front camera then starts recording. The shortcut is then set up to automatically send the video recording to your emergency contact, along with a map of your location.

Joneshia Wilkerson didn’t need a shortcut on her phone to quickly reach thousands of people watching on Instagram after she was pulled over in Tampa in June.

Wilkerson said the officer’s gun was pointed at her head.

In the video, while sitting in her car, Wilkerson said, “Sir, can you at least put your gun down?”

TPD then released body camera footage it said shows the officer had his gun at a “low ready” position.

The officer in the body cam video is heard saying, “I ran the tag and it says it was stolen. Just don’t move.”

Wilkerson said she was borrowing the car from a friend and has not been charged with any crime.

'The public needs to see this'

Cory Weckerle, with Black Lives Matter Tampa, told the I-Team plenty of incidents are already being captured on camera.

“You can catch all of this stuff on camera. You can catch everything on camera that you want,” said Weckerle. “It’s more now about, what we are going to do with the evidence?”

Weckerle said body cams are only useful if the footage is made available to the public.

“Not just in a timely manner for when, you know, the police department sees it best fit for them to release it to us. The public needs to see this when the situations are happening,” said Weckerle. “We don’t want them to just push situations under the rug.”

RECOMMENDED: Thousands rally in Tampa for Black Lives Matter, Back the Blue demonstrations