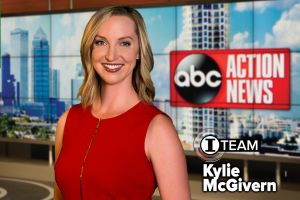 Before her time in Austin, Kylie worked for WJHL in the Tri-Cities as the 7pm anchor and investigative reporter. During that time, Kylie was honored with 12 Tennessee Associated Press Broadcasters awards, including Best Investigative Story, Best In-Depth Hard News Story, Best Enterprise Story, and Best Reporter in 2015. Kylie also worked as a multimedia journalist/anchor/producer for KOMU 8 News in Columbia, MO, and interned abroad at the U.S. State Department’s U.S.-European Media Hub in Brussels. Kylie graduated from the Missouri School of Journalism at the University of Missouri with a Bachelor’s Degree in Broadcast Journalism and minor in Sociology. MIZ!

Born and raised in Tarpon Springs, Kylie is thrilled to get back to her roots and work in the community she calls home. Outside of work, Kylie is excited to be back near the beach, amazing seafood and key lime pie! Kylie has a passion for storytelling, and believes everyone has a story. She looks forward to sharing yours. If there’s something you’d like Kylie to look into, shoot her an email at kylie.mcgivern@wfts.com, follow her on Twitter at @KylieMcGivern and Instagram, and like her Facebook page to send messages.