Thousands rally in Tampa for Black Lives Matter, Back the Blue demonstrations

People across the Tampa Bay Area were back out Saturday protesting against injustice and for equality. More than 2,000 people joined a protest with Black Lives Matter Tampa, starting from Fred Ball Park and marching down Bayshore Boulevard.

TAMPA, Fla. — People across the Tampa Bay area were back out Saturday protesting against injustice and for equality. More than 2,000 people joined a protest with Black Lives Matter Tampa, starting from Fred Ball Park and marching down Bayshore Boulevard.

“There’s been a lot of racial injustice, not just here in Tampa, but throughout the country,” said Shaan Jones. “I think back to my grandparents. They were out in their towns 50, 60 years ago protesting the same thing, so I feel like my generation is the last one who really needs to stand up and fight for this. If things don’t change now, when will they ever change?”

Earlier in the day, hundreds of people gathered outside Tampa Police District 1 for a “Back the Blue” rally. People wanted to show their support for the men and women in blue.

More than a hundred people are walking up and down Tampa Bay Blvd right now, some cheering “No hate, back the blue.” @abcactionnews pic.twitter.com/ffbKopQCby

"What happened in Minneapolis was horrid and horrible, but that doesn’t represent the men in blue, the men and women out there,” said Ellen Williams.

That group marched down Tampa Bay Boulevard, waving signs, and even dropping a giant flag across from the police department as a sign of support.

“The officers who work here day-in and day-out, just thank you for even showing up for work,” said Harrison Rogers.

“I think there needs to be a certain level of education,” said Mary Coates. “The old school is gone. There needs to be more diversity training and more gentle actions when things get out of control, but I believe overall, our policemen and women are amazing.”

About an hour later, a counter-protest arrived, chanting “Black Lives Matter.” At one point, law enforcement blocked the street and formed a line between both groups.

“Well this is not going to end and we will not get change if this ends next week,” said Suaad Portillo.

Police created a barrier with their bikes at one point to separate both groups @abcactionnews pic.twitter.com/zeJm42sZr0 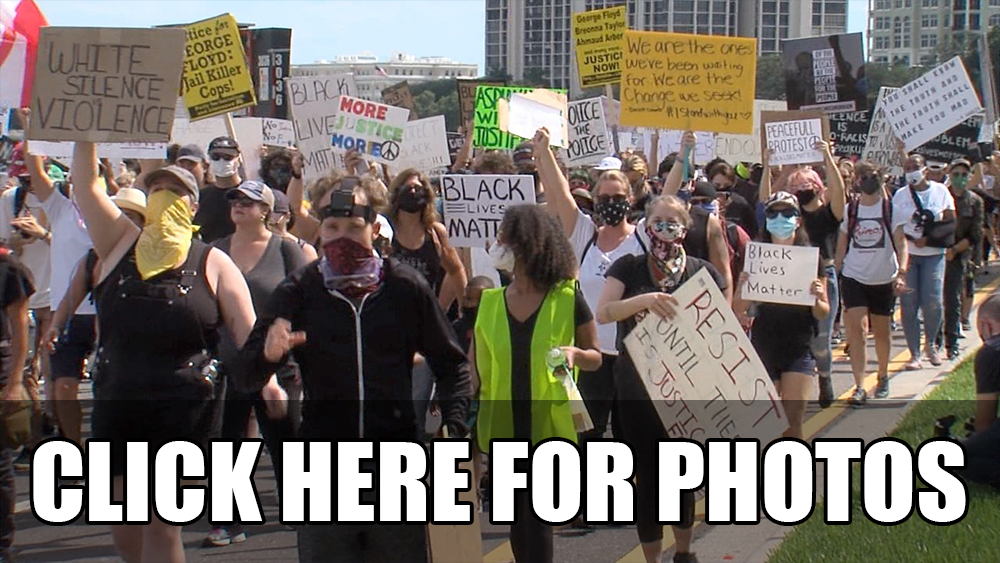 All demonstrations on Tampa Bay Boulevard and with Black Lives Matter along Bayshore Boulevard ended peacefully.