Bitter battle over money, ashes between widow and family of Florida teen who died from cancer

VALRICO, Fla. — The family of a Valrico teen who died of cancer, shortly after he had his dream wedding, is heartbroken after they say his widow took his ashes and scattered them without their knowledge.

Dustin Snyder, 19, died of synovial sarcoma, a rare form of cancer at the end of February.

His dream wedding was planned within days thanks to generous donations. The dress. The suit. The venue, cake, DJ — everything was donated by the community in just four days. A GoFundMe also helped raise donations for the wedding — approximately $40,000.

That money is now part of a bitter battle between Sierra, his widow, and Snyder's mother and siblings.

The GoFundMe was created by Snyder's sister — the original post said the money would go to the wedding, but after people donated a venue, a dress and tux, and a reception for Snyder they decided to use the money for other needs.

They posted an update on the GoFundMe: 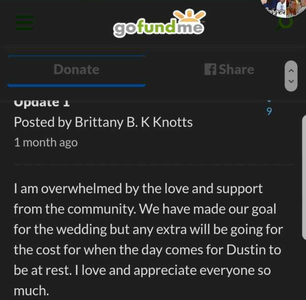 Knotts and her family promised the money raised would go to paying medical bills and things to make Snyder more comfortable — things like a medical mattress, a massage chair, a TV, games he wanted and ultimately funeral expenses.

Snyder was reportedly informed about the plot his ashes would be buried at in Riverview before he passed.

This was also spelled out in a contract Snyder signed before his death, that also stated that the leftover money would go towards paying off $18,000 on the car that Sierra wanted, per her request.

The family says that there was no money left over for the car, and that's where the dispute began — but didn't end there, it became a fight over Snyder's ashes.

"All we asked was for a little piece of him," said Knotts. "And not for the four siblings he had, but for my mom."

The family alleges that Sierra said she would give them some of the ashes, but only if she received the money for the car.

On Tuesday, Knotts and Sierra went to court over a restraining order filed by Sierra.

The case was dismissed and Knotts said the judge suggested in court that Sierra split the ashes with the family.

However, shortly after the hearing, Knotts received a video from social media that shows Sierra spreading his ashes without the family being there or knowing.

The video was posted to Snapchat:

The family is upset because some of the money raised was used to purchase the plot for Snyder's ashes.

"We paid for a plot with everyone else's money, and it's just going to sit there," she said.

ABC Action News spoke to Sierra in person, but not on camera — she tells us she has been receiving death threats from complete strangers and has involved authorities.

She says she has been devastated since Snyder's passing, as she spent every single day with him until he died.

Sierra and Snyder signed a marriage license, meaning she had the official rights to his ashes.

Sierra tells us Snyder's wishes were to be with her. 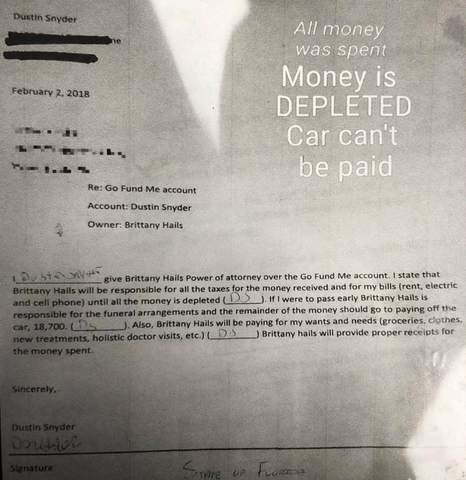