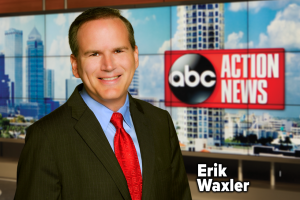 Emmy-award-winning reporter Erik Waxler joined ABC Action News in December 2008. He's been all over the Tampa Bay area covering news and sports as a reporter and multi-media journalist.

He traveled with the United States Air Force to Haiti and reported on the aftermath of the devastating earthquake. He's also gone on assignment for ABC Action News at the Super Bowl, Daytona 500, SEC Championship, Sugar Bowl and even the Scripps National Spelling Bee in Washington, DC.

Before coming back to Tampa, Erik spent 14 years as a sports anchor and reporter in Terre Haute, Knoxville, Louisville and Indianapolis.

Among his career highlights are covering the 2004 Summer Olympics in Athens, Greece, and reporting live from the White House after the Tennessee women's basketball team won the NCAA Championship.

Never one to slow down, Erik's also hitched a ride in an F-18 with the Blue Angels and been driven around Indianapolis Motor Speedway at 175 miles an hour.

Erik was named Outstanding Graduate in television news at the University of Florida. He grew up in North Miami Beach and is extremely happy to back in the sunshine state with his wife and son.