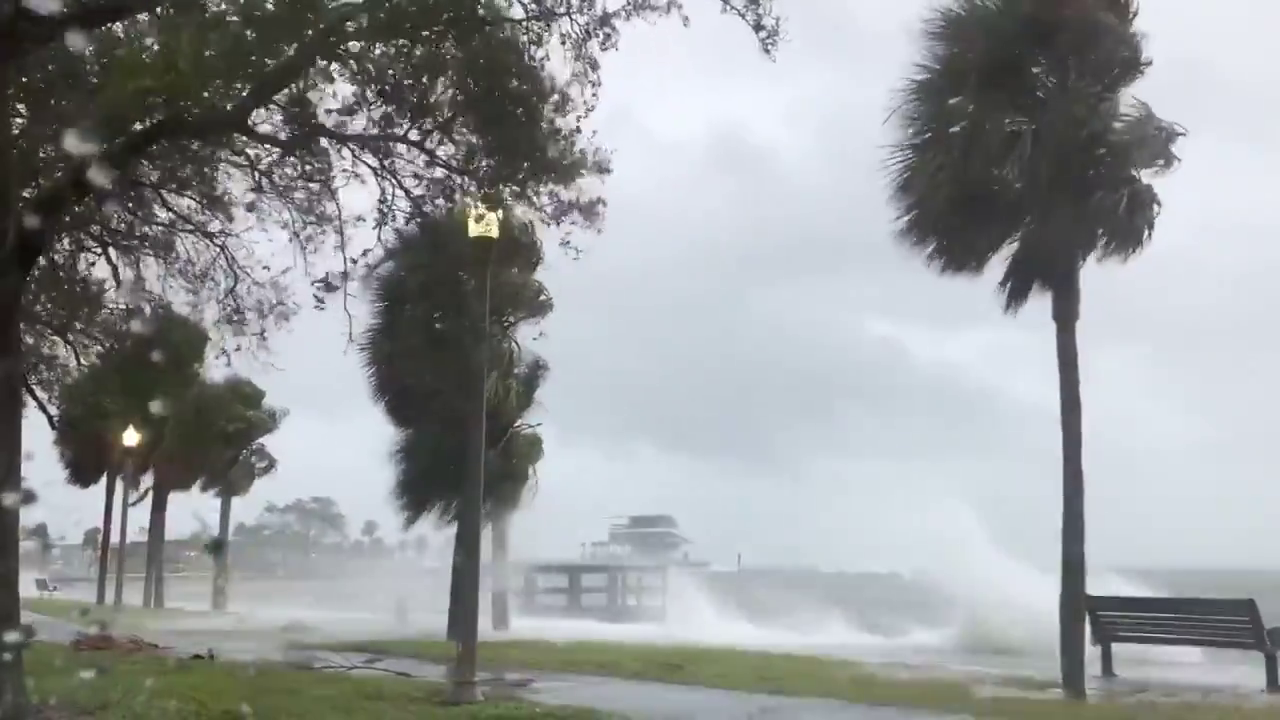 TAMPA, Fla. — Tropical Storm Eta is moving out of the Tampa Bay area Thursday morning, but the storm left flooding and thousands without power in its wake.

→ The latest from the National Hurricane Center on Eta, all watches and warnings

Businesses in John's Pass are preparing themselves to witness the full impact Tropical Storm Eta had on the sand encroachment problem they've already been struggling to deal with.

Low tide on Thursday was very revealing and showed just how much sand now extends into the pass.

Through some parts of the channel, the sand reaches nearly halfway into John's Pass.

Eta brings some damage to Merry Pier in St Pete

Clean up of debris on the eastbound lanes of the Courtney Campbell Causeway is complete. All lanes are now open.

All lanes of Bayshore are open following serious flooding from Eta.

The Sunshine Skyway Bridge is open.

Clearwater Police say the roadway is covered in debris and will likely be closed for several hours.

The eastbound lanes of the Courtney Campbell are covered in debris from overnight and remain closed at this time. It likely will be several hours before they can be cleaned up and reopened. pic.twitter.com/wjHOcZn0eL

Eastbound lanes of the Courtney Campbell Causeway are shut down.

Firefighters say they rescued at least a dozen people from Bayshore Boulevard who got stuck in flooding. Thursday morning, a few vehicles remain abandoned in the roadway which is still flooded.

You can check this map from the City of Tampa for reported and confirmed street flooding.

Firefighters rescue drivers stuck on Bayshore due to flooding

The flooding is receding some Thursday morning at the Twin Cities Mobile Home Park in St. Pete. Residents were forced to evacuate Wednesday night due to the rain and flooding.

I’m at @DukeEnergy this morning! Luckily, reports of outages across the 3 utility companies are trending down. Once daylight breaks you may be tempted to start clean up but coming up on @abcactionnews I have the reason that you may want to hold out for now. pic.twitter.com/kBhCktuWCn

A couple in Tampa is hopeful for assistance from the Red Cross on Thursday after strong winds dropped a massive tree on their home Wednesday night. Tampa Fire Rescue told them the home is no longer structurally safe.

Meteorologist Greg Dee says by Thursday night, Eta will weaken to a tropical depression. Eta is moving out of our area, across the state and toward the Georgia coast.

Eta made its second landfall in Florida near Cedar Key with 50 mph winds.

Update: Tropical Storm #Eta has made landfall near Cedar Key, Florida at 4 am EST Thursday. Maximum sustained winds were 50 mph (85 km/h), with a minimum central pressure of 996 mb (29.42"). The full advisory is at https://t.co/tW4KeFW0gB pic.twitter.com/RiB4L3F4yV

Eta is being blamed for at least one death in the Tampa Bay area. A person in Manatee County was killed after they were electrocuted inside a home while standing in water on Wednesday, according to officials.