TAMPA, Fla. — Tropical Storm Elsa is moving almost parallel to the west coast of Florida as it brings heavy rains and gusty winds to the Tampa Bay area. The National Hurricane Center says the storm will make landfall along the north Florida Gulf Coast by late Wednesday morning or afternoon.

Hurricane Warning dropped for coastal Hernando, Pasco, Pinellas and Hillsborough counties. Still in place along the coast of Citrus County.

ELSA | Coastal hurricane warnings have been dropped for Hernando, Paso, Pinellas and Hillsborough counties. Citrus county remains under a hurricane warning along the coast. #flwx pic.twitter.com/dwsOGidQyn

Drivers in North Port are asked to use caution as crews assess roadway impacts. The following streets have been identified as drivers needing to use caution on various levels.

Tropical Storm Elsa continues to weaken, with winds down to 65 mph in the National Hurricane Center's 5 a.m. update. The system is moving almost parallel with Florida's west coast. Impacts to the Tampa Bay area will continue to decrease throughout the morning. However, scattered rain and storms will continue through the afternoon.

The NHC is forecasting landfall by late Wednesday morning or afternoon along the north Florida Gulf Coast.

A Tornado Warning has been issued for our area. Stay tuned for the latest weather updates on https://t.co/FV4uJ9fdjq pic.twitter.com/et5t53xdmY

Elsa downgraded to a tropical storm.

A look at the conditions under the John Ringling Causeway in the @CityofSarasota at about 1:30am Wednesday as high tide approaches. #Elsa #Sarasota #Police #FLwx pic.twitter.com/Rceof9nhu7

The NWS allowed the tornado warning to expire.

A Tornado Warning has been issued for Hernando, Pasco, and Sumter counties until 1:30 a.m.

A Tornado Warning has been issued for our area. Stay tuned for the latest weather updates on https://t.co/FV4uJ9fdjq pic.twitter.com/Mrzy9lEGIE

Denis provides a quick update of what to expect over the next several hours.

Wind has picked up big time in Clearwater. Winds out of the east and gusts 50+ mph out here. Could get worse, too. No power outages that we can see so far along Gulf Blvd and Coronado Dr. pic.twitter.com/E9nc1bq699

Clearwater Beach is gusty as Elsa blows by

Denis Phillips gives us the latest on Hurricane Elsa

A Pinellas official answers questions about the situation in Pinellas and what areas are prone to floods.

Erik Waxler gives us a look at intense winds in Pinellas.

10:38 PM - A Tornado Watch has been issued for all of central and west-central Florida until 8 a.m. as Hurricane Elsa moves through the area.

A tornado watch has been issued for parts of Florida until 8 AM EDT pic.twitter.com/YLQLpc7pjR

Ryan Smith tells us how quickly heavy rain and wind came then went in Manatee County.

Emergency Management Chief in Sarasota gives us the rundown on any damage or issues in the county.

10 PM
Views from local beaches in Sarasota and Hillsborough

9:45 PM
Ryan Smith gives an update on storm conditions in Manatee County and speaks with a local family about precautions.

Manatee County seeing some flooding near the beaches

McKenna King updates us on the weather in Clearwater and efforts to keep everyone safe.

Clearwater officials asking everyone to go home and be safe

Sporadic power outages have been reported across the area as Hurricane Elsa moves through. Here are the latest numbers:
Duke Energy - approximately 317 homes without power, primarily around St. Petersburg
Florida Power and Light - reports 450 homes without power in Sarasota County
TECO - no widespread outages reported

Mayor Kriseman calls in to discuss Elsa in St. Pete.

Mayor Kriseman talks Elsa and what they're doing in St. Pete

Clearwater beach began to see high winds and beachgoers head inside for safety.

Mayor Jane Castor called in to tell us how to city plans to handle Hurricane Elsa and her hopes for the Lightning game tomorrow.

Governor Ron DeSantis called in to explain the state response to Elsa and the collapse in Surfside, Florida.

Publix grocery stores across the Tampa Bay area will close their doors at 8 p.m. Tuesday night and not reopen until Wednesday morning due to Tropical Storm Elsa.

Click the map below to see the closing and opening times for the stores near you. 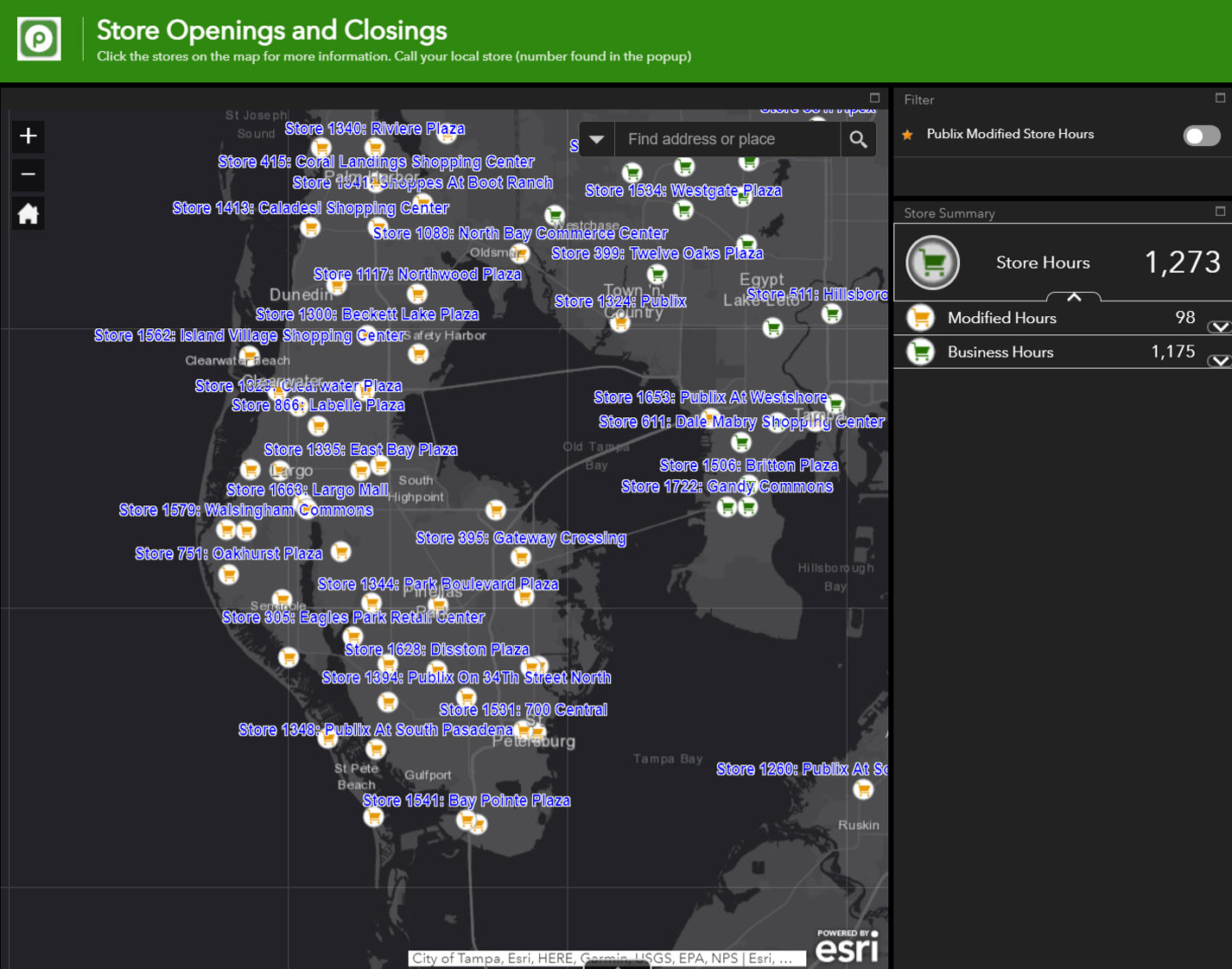 Traffic to #ClearwaterBeach via Memorial Causeway is being restricted to residents, business owners and tourists who are staying at the beach. If you’re looking to sightsee or surf the waters, you’ll be turned around. pic.twitter.com/JnBQFMt0mM

St. Pete crews bagged and loaded into vehicles nearly 23,000 sandbags pre-storm. We try to make it easy on our residents but keeping folks in their vehicles. Your tax dollars working for you.

Reporter Erik Waxler was at St. Pete beach and caught up with people enjoying the beaches as Elsa approaches

Lots of tourists are in the Tampa Bay area, but as Elsa approaches, they are respecting the storm and being safe. Reporter Ryan Smith has the latest

Longboat Key weather conditions are starting to pick up with Tropical Storm Elsa on the way to Tampa Bay. Reporter Wendi Lane has the latest

The weather seems clear for several parts of the bay area but Elsa still looms on the horizon.

Right now, Tarpon Springs is getting ready for Elsa's impact and people are making their last-minute preparations. Reporter Haley Bull has the latest info

Residents in Longboat Key are no strangers to flooding, they experienced it after Tropical Storm Eta and now with Elsa approaching, they say they are taking it seriously.

Some residents making their own sandbags on Dandy Beach

Due to Tropical Storm Elsa, the Tampa International Airport will be closing at 5 p.m. Tuesday

People who live near the shore acres community in St. Pete are busy getting sandbags to prepare for the storm. ABC action news reporter Adam Walser is at the Mangrove Bay Park where city employees have been hard at work.

The entire Tampa Bay area is under a HURRICANE WARNING as Tropical Storm Elsa continues to strengthen as it approaches the region. Maximum sustained winds are 70 miles per hour with higher gusts. ABC Action News goes on the air at 3 p.m. with live coverage!

Elsa Update: Here are all the updated Watches and Warnings. Again, winds are up from 60 to 70 mph. These winds are in a small part of the storm, but the end result is a change of status to the storm. Bottom line, the worst comes through tonight. We're LIVE on air at 3. pic.twitter.com/TF2uhVsOYH