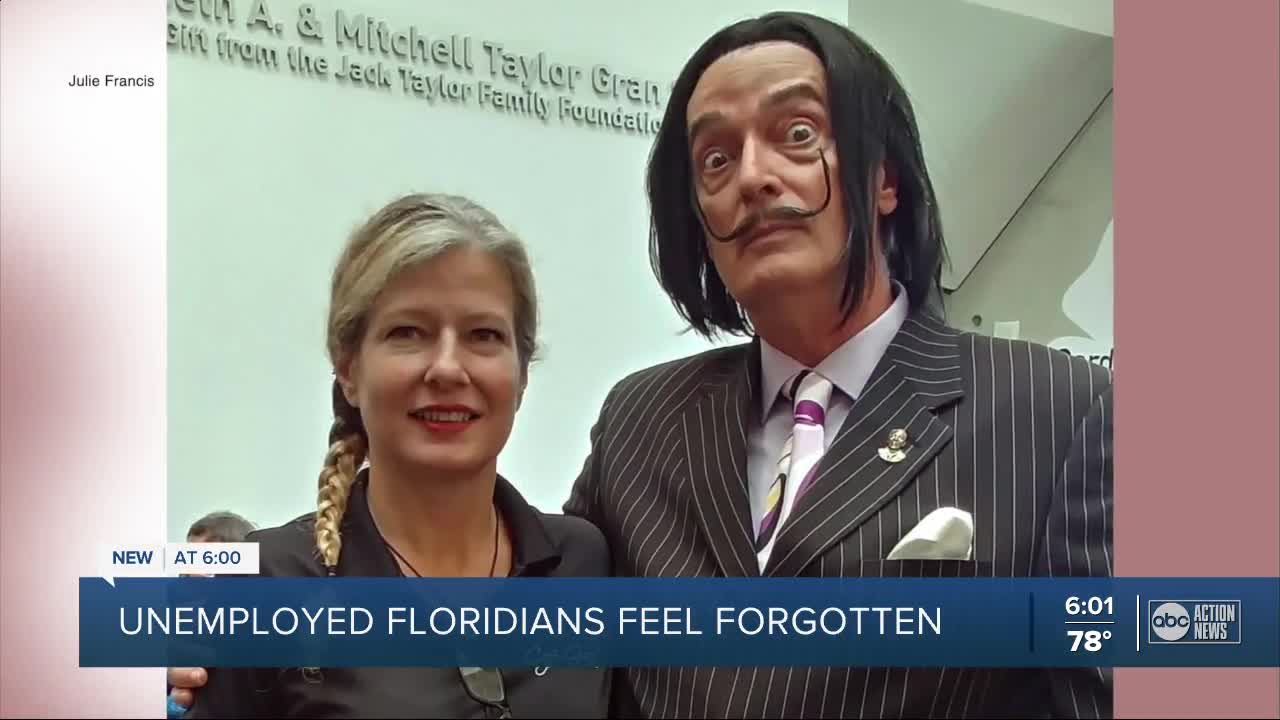 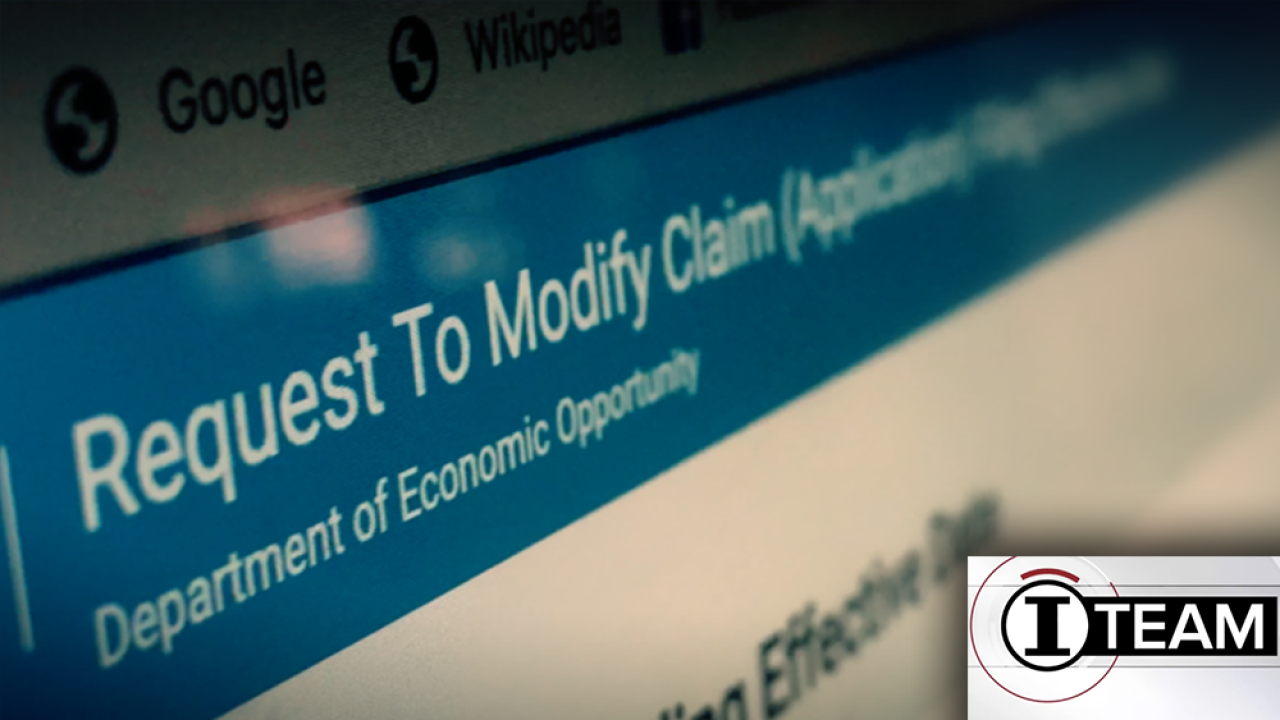 TAMPA, Fla. — ABC Action News is taking action for you, trying to get you the unemployment help we know you need.

I-Team Investigator Kylie McGivern and the ABC Action News team have been working for months to get you answers and get you paid.

To hold state unemployment officials accountable, so far, ABC Action News has sent the Florida Department of Economic Opportunity (DEO) the names and information of 25,000 people. These are people who say they are still waiting on state or federal unemployment checks they are owed.

Having trouble with Florida unemployment? Let us help:

In some cases, we found it’s getting people help quicker. We plan to pick people at random each week who have submitted their information, to see where their unemployment claim stands and if they've been paid.

After applying for unemployment benefits four months ago, Francis told the I-Team, “I’ve not received any of it.”

When Francis logs into CONNECT, her claim still says “pending.”

“That screen has never changed,” said Francis. “I found out that the claim number is overlapping with somebody else, so somebody else probably isn’t getting their unemployment.”

As Francis continues to work to get her claim processed, she has a message for the governor’s newly appointed head of DEO, State Rep. Dane Eagle, R-Cape Coral.

“Good luck,” said Francis. “And do it. You know, come up with some really solid solutions and get the work done.”

You can click here to read the full story.

The state’s moratorium on evictions is scheduled to end September 1 unless Governor Ron DeSantis extends the order.

On Thursday, August 27, the I-Team spoke with Democratic Senator Jason Pizzo, who’s been in Tallahassee working to help get people their unemployment checks.

Sen. Pizzo said at this point -- whether an out-of-work Floridian filled out an unemployment application wrong or the state Department of Economic Opportunity is to blame -- the reality is, a wave of evictions is coming.

“Do I have several thousand people who are broke, who cannot pay their rent or mortgage and in five days they’re going to be evicted? Do we have that situation again, for another month, for the fourth month in a row? Absolutely,” said Sen. Pizzo.

Sen. Pizzo and his team have been gathering information from claimants -- 3,000 names and counting this week alone -- to deliver to DEO before the end of the day Friday.

“When I have phone calls and text messages on Twitter and Facebook and Instagram, and phone calls to the office, and emails about people wanting to kill themselves, about a mother that walked into oncoming traffic and unfortunately, she said the trucks veered away from her at nighttime, and single moms that need chemo treatments, it just didn’t feel right to stay home,” said Pizzo.

As out-of-work Floridians try to claim their benefits, a DEO spokesperson told the I-Team on August 21 that out of the 2.9 million unique claimants, 1.4% have appeals pending.

That's more than 40,000 people with appeals pending, after being denied unemployment benefits.

A DEO spokesperson added that the number of appeals is constantly changing.

Amy Mechtell applied for unemployment when she was furloughed, but was denied. She told the I-Team this is because the state has her wages listed incorrectly.

“You only have 20 days to appeal, so by the time I got the letter, the appeal date was long since passed. But I appealed anyways. I also sent requests for reconsideration, I’ve never heard back from that, so my biggest frustration for them is communication," said Mechtell. "If there’s something I’ve done or something my employer’s done, I want to fix it. And it could be an easy fix, I just can’t talk to anyone that can tell me what needs to be done.”

The I-Team contacted DEO to ask how many others are stuck in the appeals process. We are still waiting for an answer.

“You still have a lot of people that are waiting in the appeals process, myself included, and have heard nothing back. It’s been about five weeks since I appealed," said Mechtell.

Mechtell said she continues to call and email DEO and contact state representatives for help.

“This is not something I’m giving up on, by any means," said Mechtell.

Every week, ABC Action News continues to send the state the names and information of Floridians who say they are still waiting on unemployment money.

DEO has yet to tell the I-Team just how many of those people are now totally caught up on unemployment checks. That's why we've been doing our own follow-ups.

“That was one of the things that really impressed me about you and ABC Action News in general, is that you continue to do what you can to assist people and continue to shine a spotlight on this problem," said Mechtell.

Governor Ron DeSantis has now confirmed what those out of work have long suspected -- that the state's unemployment website was designed with "pointless roadblocks" to pay out the least amount of claims.

Matt Ayotte is one of thousands who have been fighting that system for months. He was working three jobs before the pandemic hit.

“I work with entertainers, I also do event planning, keynote speaker as well," said Ayotte. “Three different sources of income and all came to an end.”

He received two weeks' worth of unemployment checks, but nothing more.

"Two and a half months with no income at all, you know, that hurts," said Ayotte.

Ayotte is self-employed and said he is owed thousands in federal unemployment money.

“I can’t even believe the federal government’s letting this happen too," said Ayotte.

As he continues to contact the state's unemployment office, local lawmakers and the governor, Ayotte encourages others still waiting on unemployment benefits to do the same.

“I can’t even describe it," Taylor said of the moment she received the thousands of dollars she was owed in state and federal unemployment checks. "It’s been a relief. It’s like the weight of the world has been kind of lifted off my shoulders a little bit. So I’m just tickled to death that it worked out for the best and I’m able to do something to help somebody else."

“I owed so much money in my bills and my rent," Esmerlin Sanchez told the I-Team. "And I was so afraid, I told the DEO I don’t want to be in the street.”

Sanchez was a Lyft driver and first applied for unemployment in March. He contacted the I-Team in May, when he still had not received a penny.

“I just wanted to share my story so people can not lose hope. Because personally, I lost hope!" said Sanchez. "I cried each day."

Ultimately, Sanchez went four months without a paycheck or unemployment before he was finally paid the more than $6,000 he was owed.

"From the bottom of my heart I want to say thank you to you. You helped me. You helped me to get my unemployment," Sanchez told the I-Team.

He encourages others, still waiting on unemployment checks, not to give up.

“You can’t give up and leave the DEO all the money that belongs to you," said Sanchez.

Paul Gonzalez reached out to the I-Team for help after he lost his hotel job in March.

Today, he is "pretty much almost caught up," on state and federal unemployment checks and is back to work.

But Gonzalez waited nearly two months to receive any unemployment money and said he couldn't get answers from the state. Instead, he told the I-Team he relied on TV reports and newspaper articles for information.

“It’s people like you that really help all of us. And you know, we’re all on this world to help each other, we’re all here - love, fun, this is what life’s about," said Gonzalez.

This week, the I-Team contacted five random people who filled out our unemployment forms and two told us they have not received all of the money they were owed.

“There’s many people who, like myself at one point, felt like just quitting and giving up on trying to get it. Because we weren’t getting anywhere. And there’s a lot of people that still haven’t gotten any money. I mean I’m grateful for the fact that I have. And I think that’s due in part to your help, which I really appreciate, but it’s people like you who are pushing,” said Snyder.

Snyder said he wants Governor Ron DeSantis to know, “This is about taking care of people. Making sure that the people have what they need.”

NOTE: ABC Action News receives no information from DEO on specific claims. We are only able to pass claimant information on to DEO.