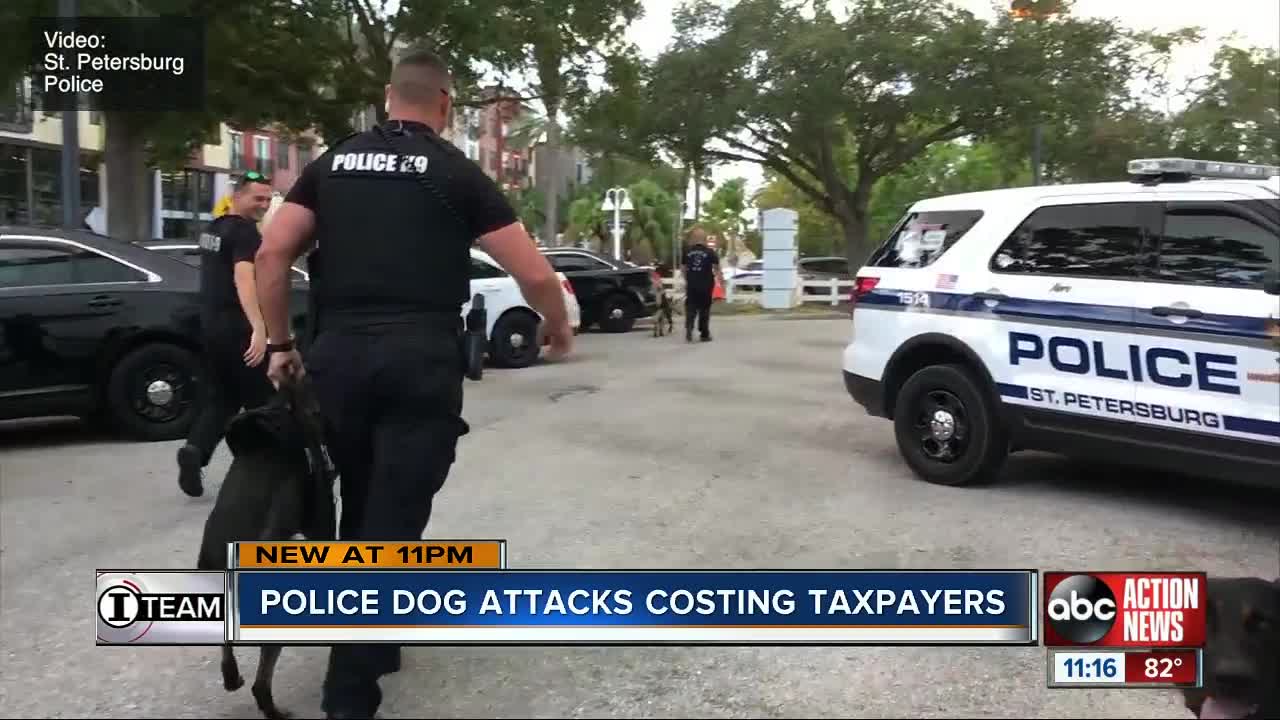 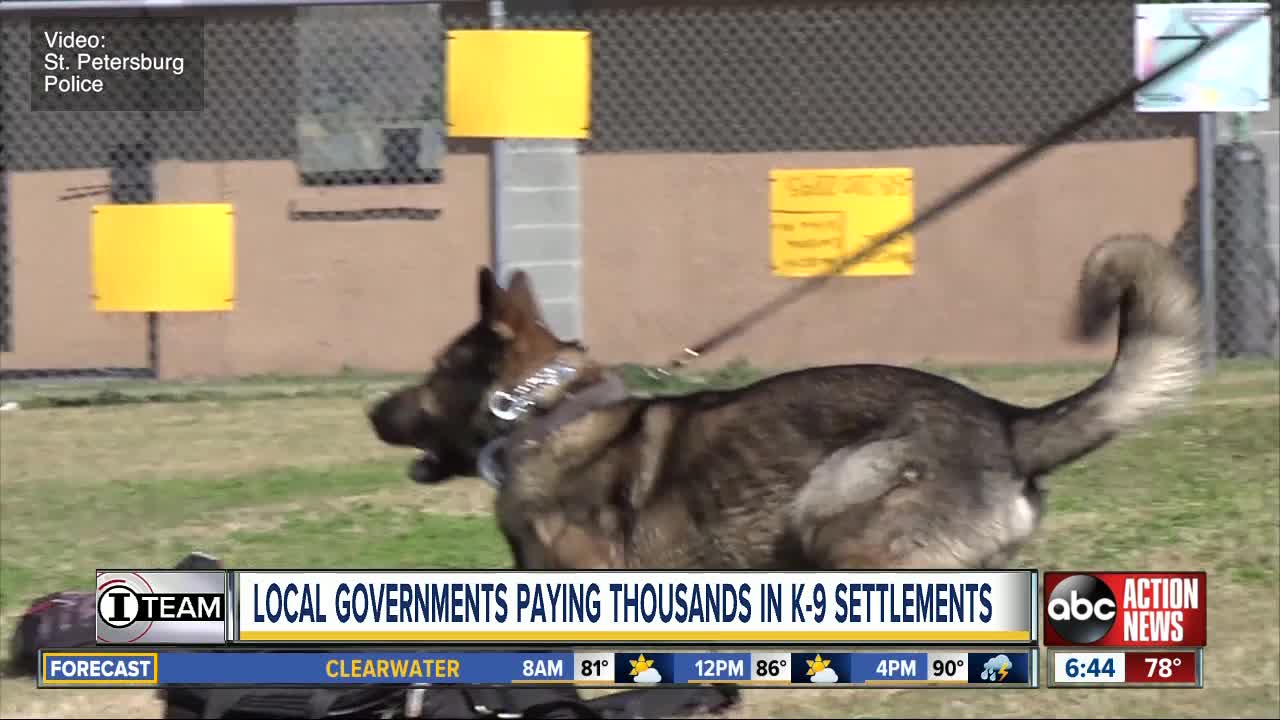 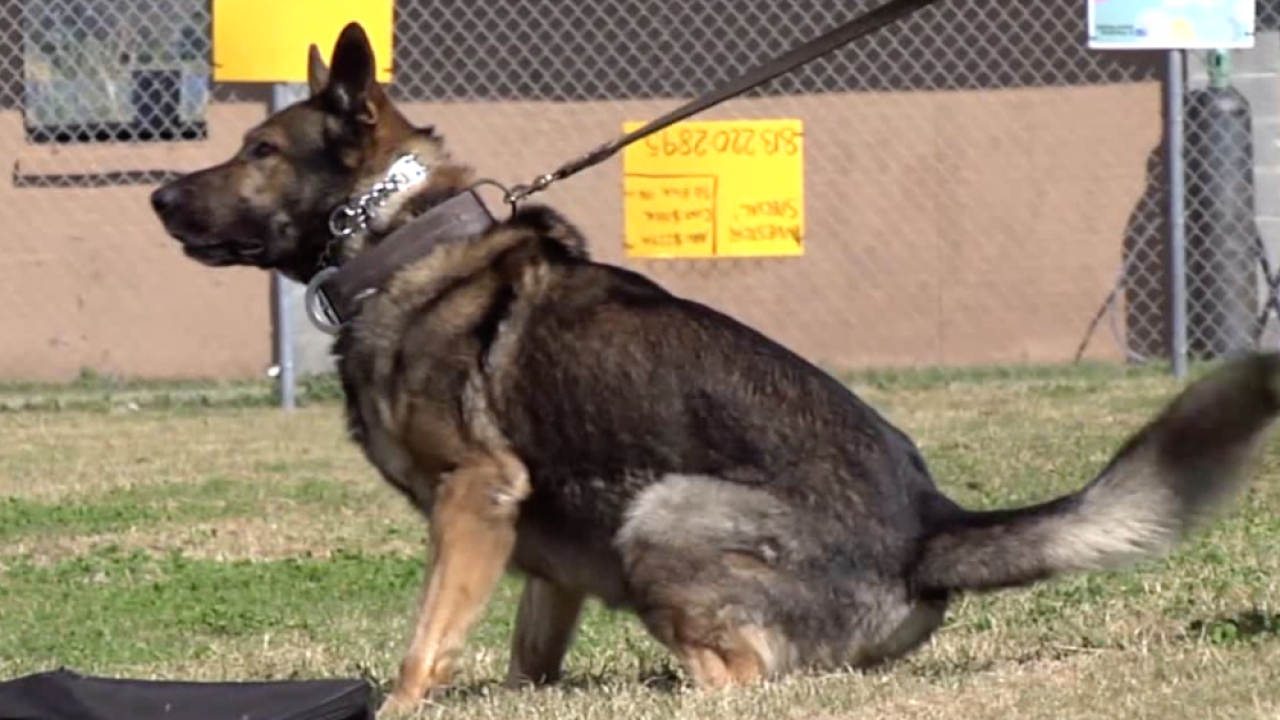 I-Team Investigator Adam Walser reviewed records for police dog bites for more than 20 local agencies. He found in the majority of cases it was the result of a suspects refusing to surrender and running away.

But the I-Team also found cases of local cities and counties paying out more than $1.8 million in combined settlements since 2016 for injuries from dog bites.

David Haire said he wasn't breaking any laws when a Hillsborough County K-9 attacked him in 2014.

Attacked while leaning on cane

According to an incident report, Haire was a passenger in his friend's vehicle when a deputy pulled them over for an expired tag.

A dog was brought to "sniff" for drugs but didn't find any.

“I was just leaning on my cane speaking with another officer and the next thing I knew is when the dog attacked me,” said Haire, who lost a leg several years earlier and uses a cane.

“My arm was torn open,” Haire said. “The shoulder itself he had yanked so many times, pulling me around the parking lot. There is severe damage to the shoulder.”

The county settled Haire's lawsuit out of court earlier this year for $50,000.

Dog had bitten before

But the I-Team uncovered the county also paid a settlement for another incident involving Stryker biting someone else five months before Haire.

“So this shouldn't even have happened to me,” said Haire when the I-Team told him about the earlier incident.

In an email, a spokesperson for the Hillsborough County Sheriff’s Office said, “One bad bite for a dog can be accidentally. The incident is always heavily reviewed, but since Stryker had two bad bites in one year, it was clear that he needed to be retired.”

The I-Team also discovered cases of police dogs even turning on their own.

In Polk County, a deputy was forced to shoot and kill another deputy’s K-9 in January.

That deputy was caring for another handler’s dog when it bit his hand and wouldn’t let go.

In 2017, a St. Petersburg police dog attacked a handler's wife, seriously injuring her.

St. Petersburg Police Chief Anthony Holloway said his department has strict guidelines on when and how K-9s can be used.

“That is a use of force tool and we want to make sure when we deploy that tool, we're using it the correct way,” said Chief Holloway.

Holloway said police dogs are only used on felony calls and his department tracks all dog bit incidents.

“If a canine handler has more than 10 bites in six months, then it automatically comes to the attention of myself and my command staff and then we'll review it to make sure there are no issues either with the dog or the handler,” said Chief Holloway.

Police dog brought in as suspect was on the ground

Matthew Poulin was lying on the ground when he was bitten multiple times by a North Port police dog, grainy police dash camera video shows.

“I was intoxicated. I was drunk. I really didn't pay no mind to the officers,” said Poulin, who was stumbling around his yard after a neighbor called police on him.

The police report indicates officers used a stun gun on Poulin as he lay on the ground after a scuffle with police, who then “retrieved a dog to apprehend the defendant.”

The police video shows Poulin on the ground and the dog biting him multiple times over the course of three minutes before the officer put the dog back in his patrol vehicle.

“I wasn't running. This is my own house. Why would you even bring your dog out?” said Poulin.

The I-Team reached out to North Port Police about Poulin’s case and the department’s other settlements.

“It should be noted that in previous K9 legal cases the City of North Port and North Port Police Department have never been found guilty of wrongdoing, agreed to a settlement, or paid out tax payer dollars. A third party independent insurance company made decisions to settle without our say and without using taxpayer funds.”

Kurt Middleton, who helped start Tampa’s K-9 program in the late 1980s, said police dogs have a valid use for law enforcement, but handlers must be careful.

“You've put yourself in a high liability area and you're responsible for them,” said Middleton, a retired Tampa Police Officer.

“They're friendly dogs, but there are certain things that can turn them very unfriendly very fast,” said Middleton.

He now owns a security company with bomb-sniffing dogs.

Middleton said he partnered with three K-9s during his career. He told the I-Team his dogs never accidentally bit anyone on the job, but both his wife and son were accidentally bitten at home.

“If something happens, he's gonna react because of the training that he's been put through,” said Middleton. “And it may be aggressive towards a person. And it could be very bad.”