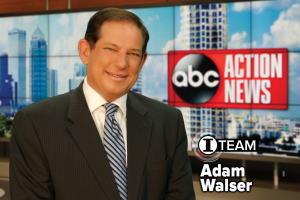 Before that, he worked as Chief Investigative Reporter at WHAS-TV in Louisville, KY.

Adam has more than 20 years of television news experience, starting his career shortly after graduating with honors from the University of North Carolina at Chapel Hill.

In 2020, his team was awarded the James Batten Award for Public Service, the highest honor given by the Florida Society of Professional Journalists.

Adam has also received dozens of local and statewide honors from Associated Press Broacasters Association and chapters of the Society of Professional Journalists.

He is excited to call Tampa Bay home and welcomes your investigative story leads.
You can email him at adam@abcactionnews.com