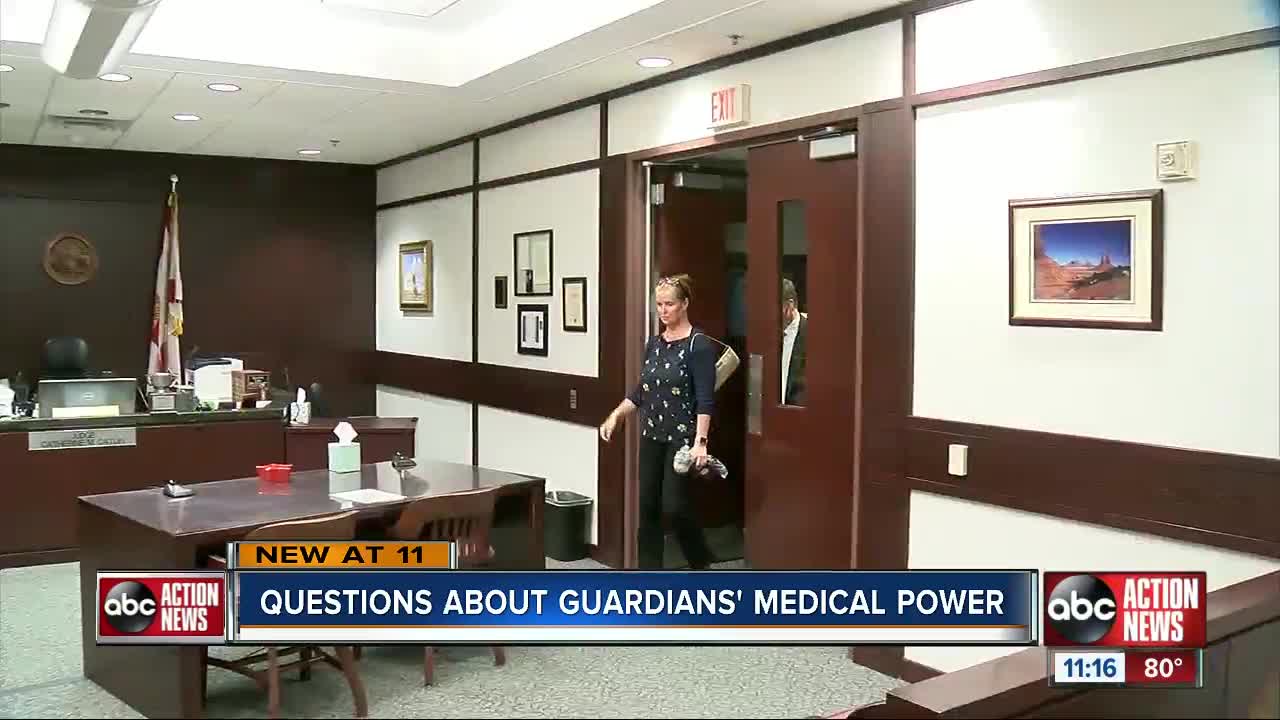 Guardians across Florida have been routinely issuing “Do Not Resuscitate” orders on the people under their care with little oversight by the court system or transparency with the public, an I-Team review found. FLORIDA — Guardians across Florida have been routinely issuing do-not-resuscitate orders on the people under their care with little oversight by the court system or transparency with the public, an I-Team review found.

The shocking discovery comes after an investigative report in July accused professional guardian Rebecca Fierle of causing the death of a man under her care by issuing a do-not-resuscitate order and capping his feeding tube without permission.

A review of hundreds of court records, transcripts and hearings uncovered dozens of cases of guardians making life and death decisions for the people under their care.

ABC Action News also discovered many of these decisions being made without oversight by the court system, which appoints guardians to care for those same people who have been deemed unable to care for themselves.

It’s unclear how many times guardians in Florida have issued DNRs because the orders often go unreported.

‘Nobody can play God’

But In 2018, the state Office of Public and Professional Guardians sent a warning letter to a Melbourne guardian for ignoring a family’s wishes about end of life care for their loved one. The office warned the guardian to consider documenting the wishes of the person under guardianship and requesting a court order to provide direction.

Former disgraced professional guardian Fernando Gutierrez said Florida’s guardians make widespread use of DNRs for the people under their care. A doctor must also sign off on every DNR order for it to be valid.

“Once you become guardian, you receive the guardianship papers, it gives you the authority to make medical decisions,” said Gutierrez.

Gutierrez, a past director of the Guardian Association of Pinellas County, was convicted earlier this year of stealing from a man under his care.

Gutierrez told ABC Action News guardians have every legal right to request DNRs – even though most have little to no medical training.

When asked how many people under guardianship he had placed on DNR orders, Gutierrez said, “I’d say it’s very high. I’d say it’s over 50 percent.”

“Yes, I’ve questioned sometimes,” Gutierrez answered. “I wonder if I’ve done the right thing because nobody can play God and nobody is God.”

Medical ethicist Art Caplan said guardians should not be deciding medical questions of life and death.

“They’re way outside their area of expertise and liable for it,” said Caplan, who directs the medical ethics center at New York University.

Caplan said those under the care of a guardian can still decide if they want to live.

“Even for a patient who’s been deemed incompetent, if they start to say, ‘I want to live. Please resuscitate me. Take the DNR order off,’ They have every right to do that,” said Caplan. “In other words, the default is treat.”

‘We need to get the DNRs out’

But that didn’t happen for the man who died under the care of professional guardian Rebecca Fierle.

Court records show Steven Stryker died in May at St. Joseph’s Hospital after Fierle ignored his pleas for help and a doctor’s recommendations to remove the DNR.

In the wake of that case, Orlando Judge Janet C. Thorpe ordered all the DNRs removed from people under Fierle’s care at a court hearing in July.

“First and foremost, we need to get the DNRs out,” said Judge Thorpe.

Later in the hearing, she added, “And that there are to be no DNRs or plug -pulling without… full-blown evidentiary hearings…”

But Sandra Kewitz said there were no court hearings for the DNR order a Manatee County guardian placed on her father – until the I-Team got involved.

After I-Team Investigator Adam Walser contacted Lutheran Family Services about the DNR one of its guardians placed on her father, Dale Kewitz, the organization immediately suspended the order and went to court to seek a judge’s opinion.

Mike Carroll of Lutheran Family Services said the call from the I-Team got his attention.

“Ultimately the judge should weigh in on it because everybody should have the right to have their say,” said Carroll. “The more consistent we can make it, the better.”

Carroll said he now he favors approval by judges – not guardians – for all DNR orders for those under guardianship.

Sandra Kewitz said her father never wanted a DNR placed on him.

Kathleen Zagaros of Wesley Chapel said she didn’t learned her mother’s guardian had placed a DNR order until she ended up in the hospital in 2016.

Her mother, Maria Kelnhofer, spent her life caring for Alzheimer’s patients as a doctor at VA hospitals. In 2003 – four years before she retired – her daughter said Kelnhofer signed an advance health directive form.

“She wanted all measures done,” said Zagaros. “She appointed me as her surrogate healthcare provider.”

But when Kelnhofer was diagnosed with Alzheimer’s herself, her court-appointed guardian took over and put in place a DNR.

Kelnhofer died of complications from Alzheimer's in 2017 and the order never came into play.

But the case remains under investigation by the state Office of Public and Professional Guardians and Zagaros wants to know why the guardian issued the order in the first place.

“They have way too much power and too little compassion,” said Zagaros.

The guardian in the case worked for Adult Advocacy & Representation, Inc.

The I-Team contacted Tamara Cribben, who runs Adult Advocacy & Representation. She refused an on-camera interview, but in emails to the I-Team she wrote her guardians don’t need permission from a judge when the people under their care are placed on a DNR list.

“There is no section of statute or rule requiring a guardian to seek a court order to place a medical code status on the patients chart,” wrote Cribben in an email.