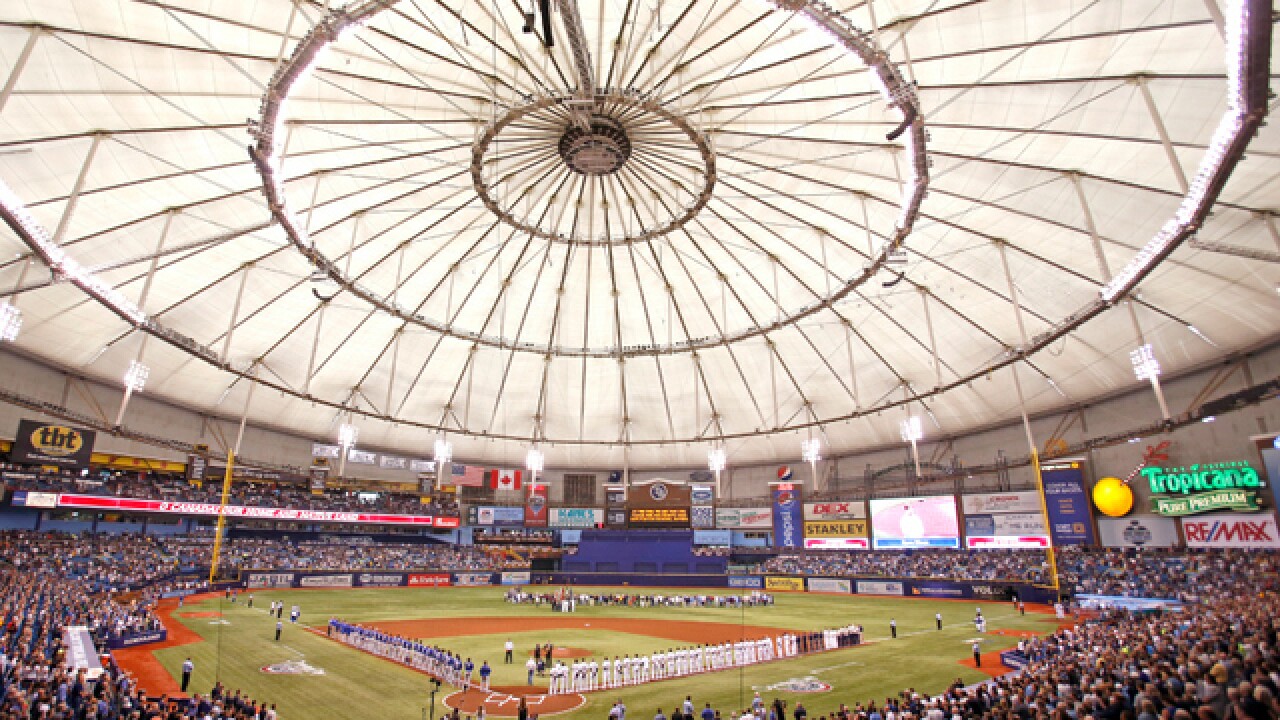 Copyright 2018 Scripps Media, Inc. All rights reserved. This material may not be published, broadcast, rewritten, or redistributed.
Brian Blanco

ST. PETERSBURG, Fla. - The Tampa Bay Rays will open their 21st season at Tropicana Field on Thursday when they take on the Boston Red Sox.

First pitch is scheduled for 4:10 p.m. If you plan on going to the season opener, there are some things you should know.

The game is sold out, marking it the 13th consecutive year the Rays have sold out the home opener.

If you still want to catch the game, it will be televised locally by FOX Sports Sun. All Rays games are also available on the radio via 620 WDAE/95.3 FM and WGES 680.

New in 2018, game day parking at Tropicana Field can only be purchased by credit card or Rays Card. Cash will no longer be accepted at Rays-owned parking lots to increase efficiency, the team says. A secure mobile technology will be used to swipe credit cards for payment.

Parking is $15 on Opening Day, and an early ‘Happy Hour’ tailgate rate of $12 is available from 11 a.m. - 1 p.m. Parking passes can also be purchased in advance at the box office or online at www.raysbaseball.com/parking.

The St. Petersburg Baseball Shuttle will pick you up from downtown and drop you off at Tropicana Field for every home game of the 2018 season. Buses, mini buses and trolleys will be providing the shuttle service, which runs approximately every five minutes.

The shuttle service is free and will run from 2 p.m. until one hour after the game is over. Shuttle stops include:

The St. Pete Trolley also offers a shuttle service starting 90 minutes prior to the beginning of the game until one hour after the game is over.

The service runs approximately every 10 minutes. Click here for the printable route map.

The stadium gates open at 2 p.m. and players will be at Gate 1 greeting fans for the first few minutes.

While the Rays were away at spring training, Shaw Sports Turf installed a new playing surface at Tropicana Field, the sixth surface in 21 seasons. The team also invested $7 million in capital improvements to Tropicana Field over the offseason, with an aim to dramatically overhaul the food, beverage and retail experience.

All fans in attendance will receive a schedule magnet and 20th-anniversary cowbell, while supplies last. Click here for more information.

Related: Tampa Chamber of Commerce hosting a discussion on the proposed Ybor City stadium site for the Rays

The Rays continue to be the only major pro sports team in Florida to allow fans to bring food and select beverages to games.

Chris Archer will be on the mound for the fourth consecutive Opening Day. On the other side, the Red Sox will throw LHP Chris Sale.

The Rays finished the 2017 season in third place with a 80-82 record, while the Red Sox finished first in the division with a 93-69 record.

The Red Sox won their second-straight American League East title, the first time they have ever won the division two years in a row. It was their 9th division title overall.