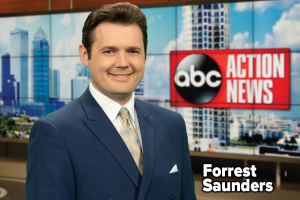 Forrest Saunders is a Midwest import, happy to be in the Sunshine State after spending his professional career covering politics and a little bit of everything across the State of Iowa.

In his decade’s worth of reporting, the four-time Emmy Award-winning journalist has interviewed many of the nation’s leaders, presidential candidates, flown with the Thunderbirds and told compelling stories about amazing people.

The small resort town of Okoboji, home of the Iowa Great Lakes, is where Forrest was born and raised. But, Florida has always been a special place to him. He’s spent a lot of time traveling up and down the Treasure Coast, fishing from Vero Beach to Key West.

Forrest attended college at the University of Iowa, earning his BA in Political Science, Journalism and Mass Communications. From Iowa City, he had his first real taste of journalism working at KTIV in Sioux City, spending the last six years in Cedar Rapids at KCRG-- working as a reporter and weekend anchor.

You can catch Forrest’s stories on Florida politics, lawmakers and state government, right here, each week