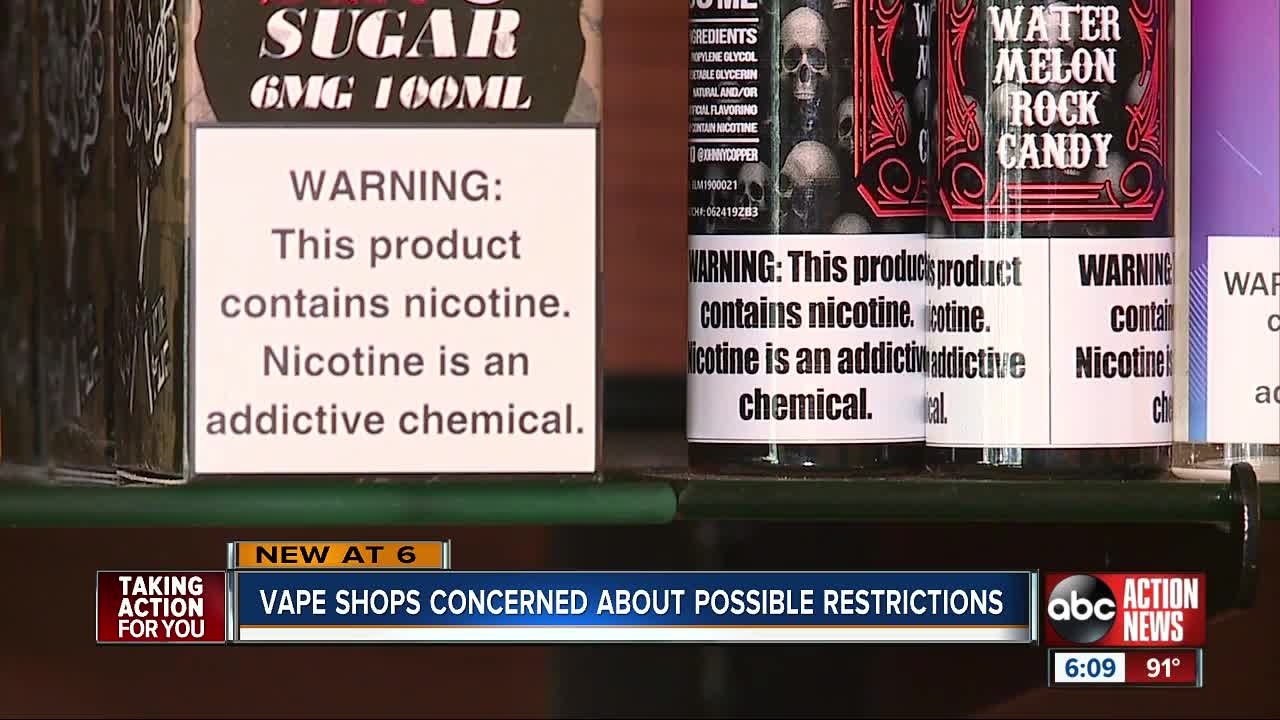 Their livelihoods are at risk. That’s what Florida vape shops are saying, worried about new restrictions proposed in the next legislative session.

TALLAHASSEE, Fla. -- Their livelihoods are at risk. That’s what Florida vape shops are saying, worried about new restrictions proposed in the next legislative session.

One of them, South Georgia Vapor, which has six locations across Florida and Georgia. Owners had seven, but were recently forced to shut it down due to slow business. Employees at the Tallahassee shop blamed what they called “vape mass hysteria."

“It’s definitely hurt our business,” Andy Meinhardt said, who co-owns the business with his wife Lillie Meinhardt. “If it keeps going it’ll destroy our business.”

The downturn in customers comes as the state worries about high underage-vaping rates and vape-related lung illnesses, nationally.

Currently, the Centers for Disease Control report there have been more than 800 cases of the illness across the country. Twelve, including a Floridian, have died. Vape supporters note most of the cases were tied to the use of bootlegged THC products.

In response to both concerns, Florida lawmakers are looking at banning enticing e-cigarette flavors to curb use.

But-- eliminating them would destroy the bulk of South Georgia Vapor’s sales. Meinhardt said his business would collapse completely.

To sway lawmakers, the Meinhardts are working with their customers and other shop owners, banding together ahead of the January session. Though long term health impacts of vaping aren’t yet known, the group will push the message it helps more than hurts— giving people a way to break cigarette addictions.

“I would just love that our lawmakers, before they make a decision, to please talk to vapers,” Andy Meinhardt said. “You can get a testimony from a customer that walks through our door every day that we saved their life.”

At least four other states have put vape bans in place. Governor DeSantis said on Thursday he isn’t there yet. He told reporters at a press event in Mexico Beach he wanted to see what comes out of the CDC investigation on the vape crisis, first.

“We’re working with the CDC every day and basically telling Floridians to follow their guidance,” DeSantis said. “But these deaths, are they from run-of-the-mill products or bootlegged stuff, where you’re mixing other things in it? CDC is studying that and I think that will be very helpful.”

The CDC has warned consumers not to use vaping products until they can conclusively determine the source of the lung-illness.