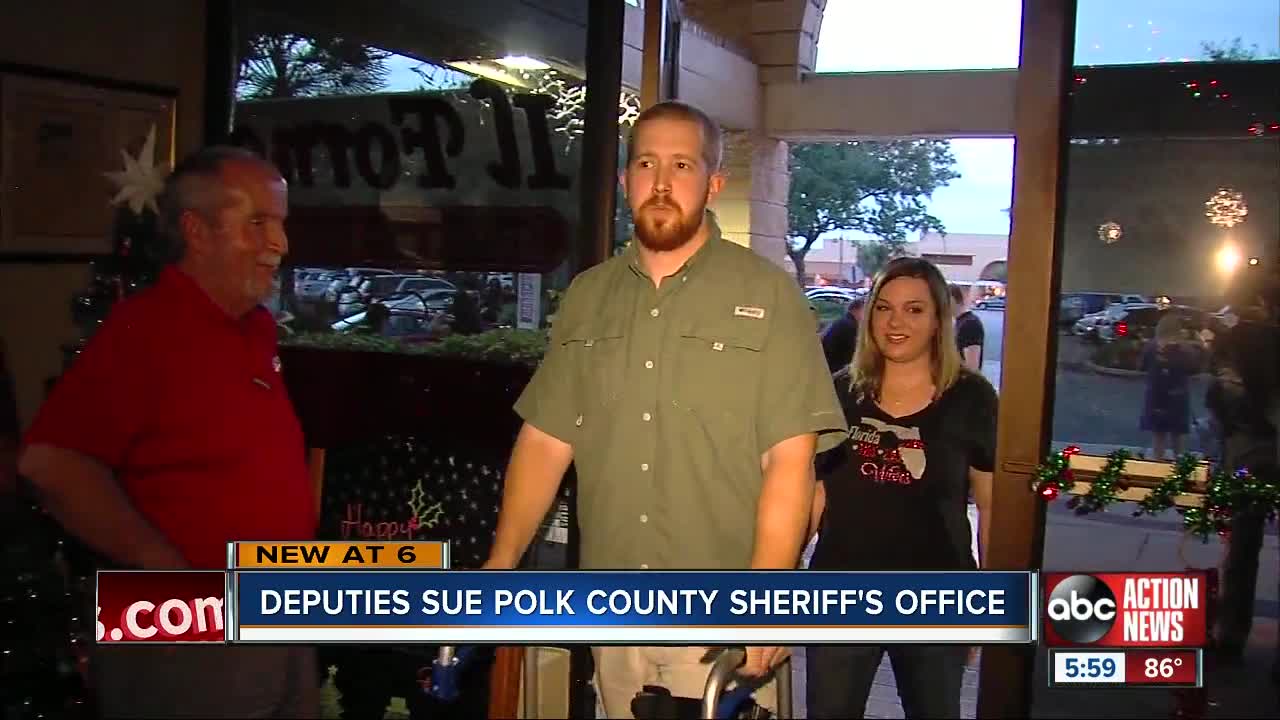 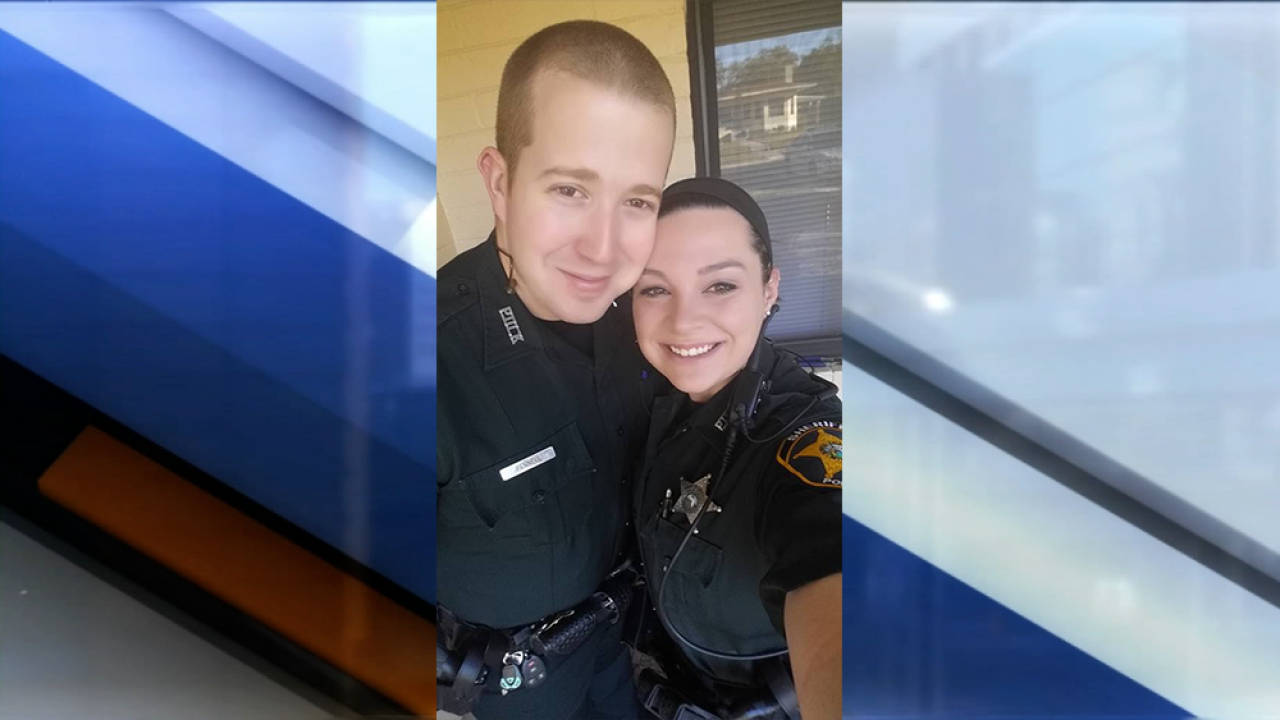 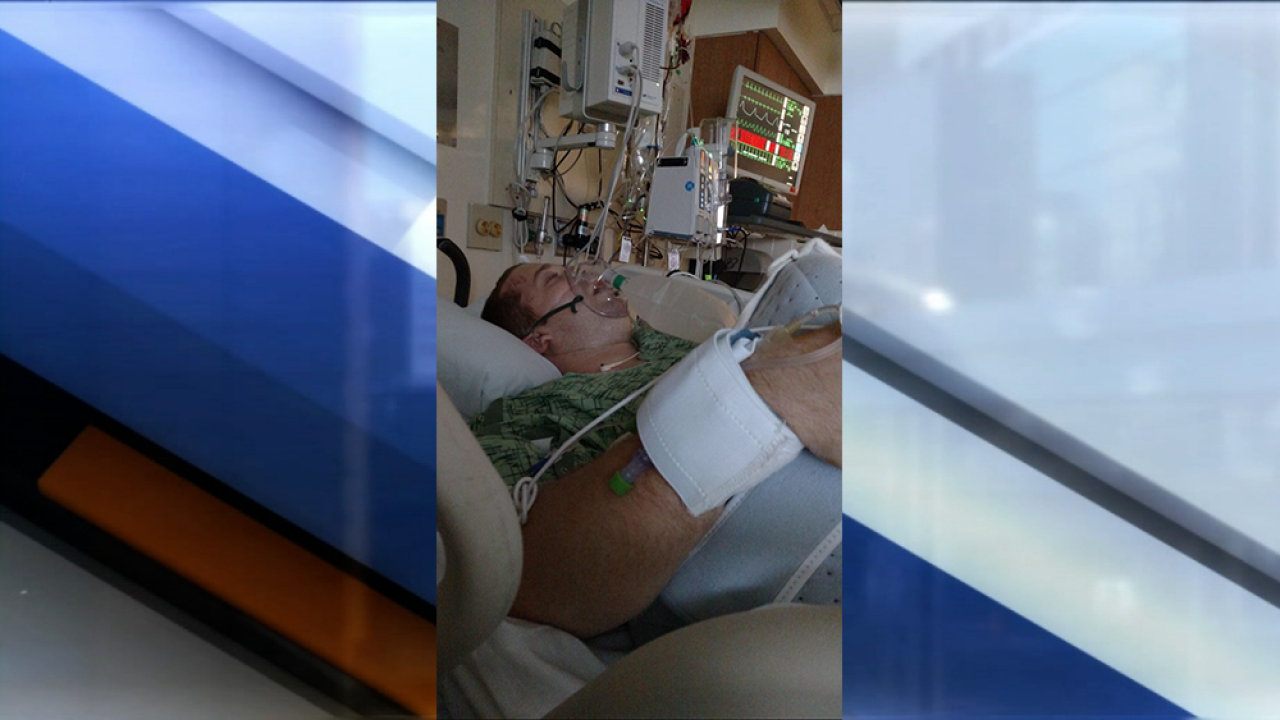 POLK COUNTY, Fla. — This month marks three years since a Polk County deputy nearly lost his life on the job after a car slammed into him during a hit-and-run crash.

Deputy Adam Pennell had to learn to walk again following major surgery. Now ABC Action News is uncovering his wife, also a deputy, is suing the Polk County Sheriff's Office alleging they broke the law. We're also finding out a former deputy is filing a potential class action lawsuit against the agency.

In front of the cameras and on social media, there was an outpour of support for Deputy Pennell but behind the scenes, his wife says, PCSO made it very difficult for her to take time off to care for her seriously injured husband.

At a 2016 fundraiser Sheriff Grady Judd said: “When we hired him [Pennell], he was healthy. We have a moral obligation to provide all the health care he needs to get healthy again.”

“Betrayal,” she described “Our agency, they preach that they're proud of family and that their deputies are family and they’re family oriented. But when the going got tough, we looked around and nobody was there,” she said.

She accuses PCSO of routinely violating the Family and Medical Leave Act and Florida Worker's Compensation statute. Christin Pennell claims it got so bad she filed a complaint with the Equal Employment Opportunity Commission, the Florida Commission on Human Relations and is now suing PCSO in federal court.

“Abide by the law that we swore we'd uphold,” is her message to PCSO.

Back in 2016, a car struck Adam Pennell and a woman after the deputy stopped to help her. 33-year-old Jessica Enchautegui-Otero was killed. Pennell was left fighting for his life with broken arms, ribs and a crushed pelvis.

The 14-page lawsuit details several grievances with the sheriff's office related to how Christin was treated before and after her husband was injured on the job. Some of the accusations include PCSO allegedly denying her leave under the Family and Medical Leave Act so she could care for her seriously injured husband. She also details being passed over for promotions before and after the accident. On one day, Christin alleges she wasn’t allowed to take a day off so she could attend a trauma survivor’s event.

Christin Pennell accuses her employer of retaliating against her for taking time off to help her seriously injured husband, of suspending his workers’ compensation benefits as he was healing from the accident, denying her promotions several times over, and rejecting a request for her to take a day off to attend an event for trauma survivors.

“There's a lot of heartache. There’s lot of hurt. He's [Grady Judd] a man of preaching morals and preaching values, preaching family and he didn't support his own word,” she said.

The face-off over time-off, she says, made Pennell’s recovery even harder.

“He was unable to get in and out of the shower by himself to be able to put a shoes on by himself to get dressed by himself I was still helping him with all those needs,” she said.

Once he returned to work the sheriff’s office put him in a civilian role, slashing his pay by $10,000, she says.

“I felt like we didn't matter what my husband had just gone through didn't matter, and they didn't care what the law said, how we felt, what was right. We need a body back so come back,” described Christin.

We had Charles Gallagher, an independent attorney, review the case. We asked him if the case had merit. Gallagher tells ABC Action News the case stands out.

“Bombshell revelations there as the Family and Medical Leave Act gives some pretty, pretty absolute protections for employees and it looks like it's pervasive deep stuff,” he said. “It’s not just surface type violations. It looks like it's deep, deep seated cultural problems here.”

ABC Action News also uncovering a potential class action suit against the sheriff’s office at the hands of a nearly 30-year deputy veteran. Conrad Case is also a member of the U.S. Army.

Conrad Case says PCSO retaliated against him for being gone during deployment or reservist duty, against the Uniformed Services Employment and Re-employment Act. His suit alleges PCSO denied him promotions due to membership in the uniformed services. The suit states Case was denied military-related absence from work and that he was stripped of over 380 hours of vacation away while deputy was on military leave deployed to Afghanistan.

“If the rule of law was so important to you. Don't give us platitudes don't get in front of a camera and use clever metaphors, just follow the law,” said Owens.

Owens represents both Christin and Case. He accuses PCSO of signaling one thing to its employees.

“Be here or else,” said Owens, “If you have to miss work, we lose our need for you and our interest in you.”

The Polk County Sheriff’s Office gave us the following statement in response to both lawsuits.

“A request for comment about a Plaintiff’s case prior to our ability to legally respond places us in an obvious disadvantage. Because these are pending lawsuits, we cannot discuss the specifics of the two unrelated cases. We can tell you that both law suits are frivolous and without merit. A typical tactic of a losing plaintiff’s case is to call the news media in an attempt to give their allegations more attention.”

ABC Action News was the one to first approach Christin after discovering the filed lawsuit.

Christin remains currently employed at PCSO. She says she wants Judd to make it right.

“You [Judd] portray one thing, but behind the scenes, it’s something totally different. You're getting on camera when there's cameras around and and saying my husband's a hero, and then I'm strong for taking care of him,” she said,” But what people don't really know is they've turned their back on him [Pennell] and they forced me to go back to work and prevent me from being able to take care of him.”