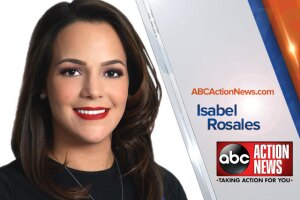 Isabel Rosales joined ABC Action News as a Multimedia Journalist in September of 2016.

Isabel was born in Holguin, Cuba and immigrated to the United States when she was six-years-old. Her first language is Spanish. Despite being the daughter of two civil engineers, she knew from an early age she was in love with journalism instead of mathematics.

Her hometown is Louisville, Kentucky. She graduated from the University of Kentucky with a double major in Journalism and Spanish. In Lexington, she was an investigative intern for LEX18 News. From there she moved to Harrisonburg, Virginia to work as a reporter. Within a year she also added anchor desk experience adopting the role of weekend anchor.

During her two years in the Shenandoah Valley, she covered a variety of stories both lighthearted and hard news. She got her name in the Valley for pulling off tough stories. The families of victims of crime were known to open up to her and share their difficult stories. She has a philosophy of digging hard for the hidden stories in the community and being empathetic to those directly impacted by tragedy. A philosophy that garnered the trust of many in Valley community.

Being Cuban-born, Isabel is also passionate about stories of interest to the Hispanic community. Isabel loves journalism and the changes it can influence in our communities. If you have any story ideas, email her at Isabel.Rosales@wfts.com During her free time, Isabel enjoys running and reading. You can also find her bundled up at home binge watching Netflix. Follow her on Facebook and Twitter.