Sheriff: FEMA contractor traveled from Alabama with 2 others to kill Polk City man, steal his guns

Polk County Sheriff Grady Judd says they have solved a homicide in Polk City after a man was killed inside a residence and another was brutally attacked.

POLK CITY, Fla. — Polk County Sheriff Grady Judd says a FEMA contractor and two other men from Alabama have been arrested in the murder of 2 Polk City men on January 3, 2018.

Kenley Campbell, 22, Darril Lamar Rankin, 22 were arrested on January 6, 2018 and Gerjuan Demarcus Jackson, 18, was arrested on Tuesday, January 9. They have all been charged with First degree murder, Attempted first degree murder, Armed burglary with assault/battery, 13 counts of grand theft of a firearm, Robbery with a firearm/deadly weapon, Conveyance burglary and Grand theft of a motor vehicle. Further charges are now pending after the second man died of his injuries.

During a news conference on Wednesday, Sheriff Judd revealed the timeline of events leading up to the death of William Reiss, the brutal attack of Kenneth Maier and 31 guns being stolen from the Polk City home.

On January 3, 2018, Campbell, Rankin, and Jackson drove from Mobile, Alabama to Reiss' home in Polk City. Jackson reportedly fired shots at William Reiss multiple times, who was later found dead in his home, and his roommate, Kenneth Maier, who died Friday of his injuries.

"We are heartbroken to hear that Kenneth passed away today," Sheriff Judd said. "We are sending our thoughts and prayers to Kenneth's family and friends. This act of vicious murder should have never happened."

According to the investigation and admissions made by the suspects, Jackson met William Reiss while conducting a hurricane damage estimate in 2017 and he purchased two handguns from Reiss. Detectives found an official FEMA contractor identification for Jackson during the investigation.

FEMA released the following statement about the incident:

“FEMA is aware of an alleged incident that occurred in Polk County, Florida, and are looking into additional details on this matter. Our thoughts are with the families and loved ones of the victims.

FEMA’s Inspection Services are handled by contracted firms, and not FEMA employees. Currently, FEMA contracts with two private sector companies for disaster survivor home inspections. Questions about individuals employed within those contracted companies, or those companies’ hiring practices, must be pursued through their individual contractors. FEMA works closely with law enforcement on a regular basis, and will provide appropriate coordination with law enforcement on this incident.”

Deputies say Campbell drove his Chevrolet Sonic, with Jackson and Ranking to Florida and arrived at 7462 Berkley Road in Polk City between 1:30 p.m. and 1:40 p.m. on Wednesday, January 3. Jackson went inside the home while the other two men stayed in the car.

Jackson admitted to deputies he fired several gun shots at Reiss and Maier. Jackson then left the residence and Campbell and Rankin helped Jackson load the victim's firearm collection and flat screen television into Campbell's trunk and the victim's Dodge pick-up truck and drove back to Alabama.

"Three killers traveled to Polk City all the way from Mobile, Alabama to steal firearms. William Reiss was shot and murdered, and Kenneth Maier was shot and left for death. Maier is currently in the hospital fighting for his life. I can't begin to say how disgusted we are at the depravity displayed by these men." -- Grady Judd, Sheriff

Deputies say when the men arrived in Alabama Jackson took the victim's truck to a wooded area and set the pick-up truck on fire.

During the investigation, detectives found six firearms, an extensive amount of ammunition, electronic devices and closing believed to be worn by the suspects during the incident. Three of the firearms were stolen from the victim's collection. Detectives also found a box of latex gloves and apparent trace amounts of blood in the Chevrolet Sonic. 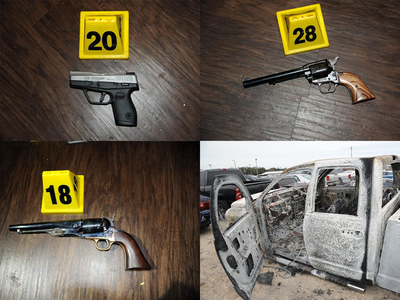 “It was disturbing because this gentleman has been at my home with my children while we were doing these inspections," said Corrin Conticello of Polk City.

Conticello, a mother of three, is on edge after learning that the man who came to her family's home six times to conduct damage assessments and collect personal information is now charged with murder.

“It makes me leery of having anybody, even contractors who are with reputable companies, in our home," said Conticello Wednesday night. "It’s disgusting, especially when you have children.”

All three suspects were booked into the Mobile County Metro Jail without incident. They will be extradited to Polk County at a later date. Further charges may be filed.