'Chet the vet' moves into new, donated mobile home after community steps in to help

AUBURNDALE, Fla. — ‘Chet the vet’ is now in his new home after threats of eviction due to his dilapidated trailer.

ABC Action News first told you about Chet Lebrun in February when he was facing eviction because of his mobile home that had been battered by the storm. 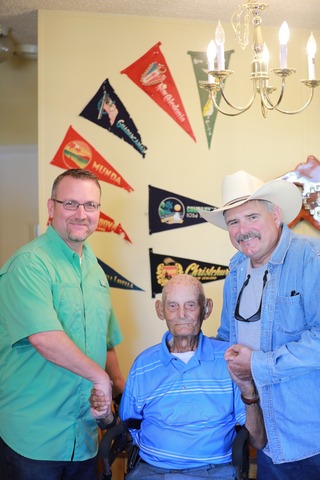 But on Wednesday, the nightmare was officially over for the 97-year-old veteran who is moving living in Auburndale.

On Wednesday the veteran gave us a tour of his brand new, donated home, one he says is the best one he’s ever had.

Chet was in a neck brace because his neck and back are constantly in pain; likely from old age and his service to his country.

When we asked Chet how he was, a big smile came across his face when he realized the stress was gone.

The 97-year-old changed addresses just this week, from Winter Haven to Auburndale.

Chet’s home was in shambles, thanks to Hurricane Irma.

“I’m going to do some cooking in there, I don’t know what yet,” Chet said as he continued to show us around his new place.

His previous mobile home park, Cypress Shores, wanted Chet to fix his dilapidated home, or leave the premises. But at his age, finances are tight and his physical ability, even tighter.

So his caretaker and power of attorney stepped in, putting out a call for action on social media back in February.

Since then, hundreds have stepped forward donating time and money, including two businessmen who went into overdrive.

“I agreed I would go over there and look at it and try to do something to get the old Park off of his back,” Donnie Harp, with Imperial Roofing of Polk Co. said.

He stepped in along with another Polk business owner, Tim Leopard.

“Once we realized how big the need was, we decided to step in and do a little bit more,” Leopard said.

“He had gone without help for so long that we were willing to jump in and show him that people care,” Leopard said.

With help, Chet Lebrun moved in this week, with neighbors welcoming him left and right.

Three visitors came by in the hour that ABC Action News was there to talk to Chet.