3 wrong-way drivers in 3 days: Should sensors be added on all major roadways? 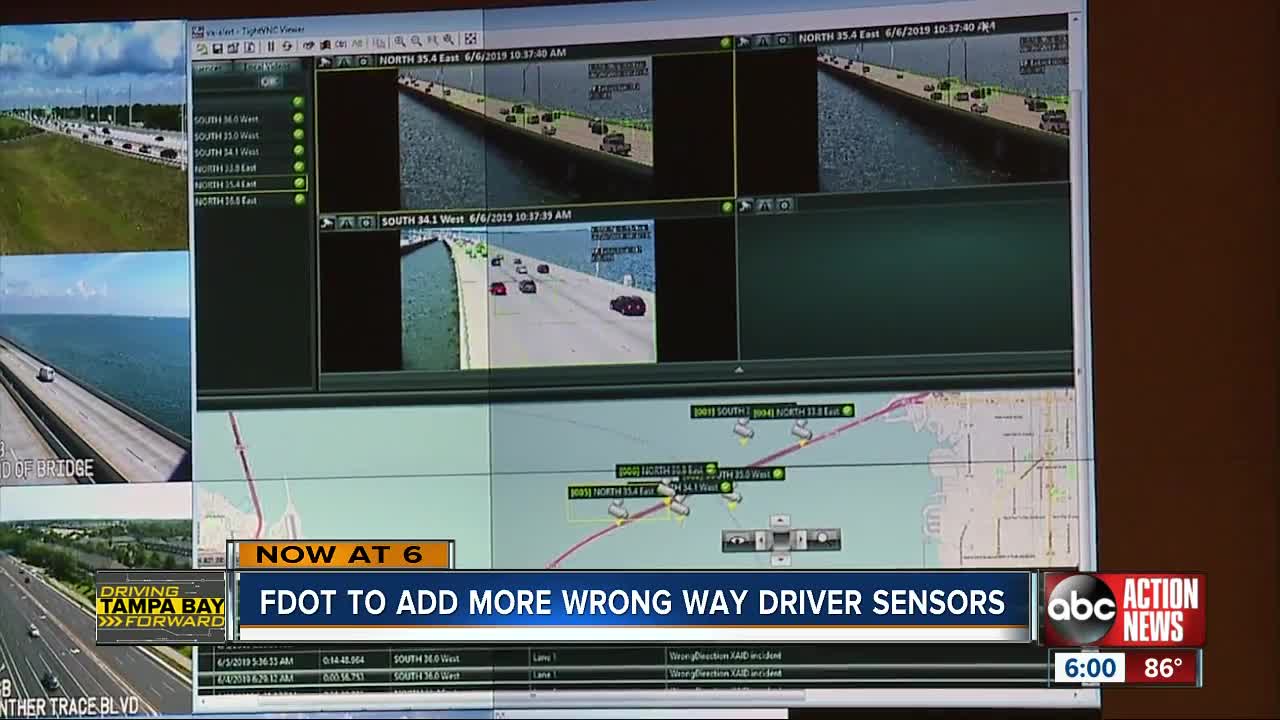 Three wrong-way drivers, in just the past three days. The crashes are responsible for killing one driver, sending two others to the hospital and two wrong-way drivers being cited for D.U.I. It's a crime putting you in danger: three wrong-way drivers, in just the past three days. The crashes are responsible for killing one driver, sending two others to the hospital and two wrong-way drivers being cited for D.U.I.

The most dangerous thing about wrong-way crashes is drivers often don’t see the other car heading straight towards them until it’s too late. That's one reason FDOT recently installed sensors along the Howard Frankland Bridge, sending messages to alert drivers to the danger headed their way.

We wanted to know, will the sensors be added to other roadways, specifically the roads where the latest wrong-way incidents occurred: I-275, the Courtney Campbell Causeway and on the Veterans Expressway?

RELATED: Wrong-way driver killed in head-on crash on I-275

FDOT says they are studying the sensors that were added to the Howard Frankland Bridge for a full year before making a decision whether to expand the technology. Kris Carson, a spokesperson for the agency, says they seem to be working extremely well.

"It seems to have a good success rate, but we are still testing it and analyzing the data," Carson explained in an email to ABC Action News.

Debbie Dudek saw the aftermath of one of this weekend's wrong-way crashes. “It was horrifying, just horrifying," she explained.

She was with her family on the Courtney Cambell Causeway when she saw the shattered glass and broken car parts. In that crash, Clearwater Police say 19-year-old Conner Hall admitting to officers he was driving drunk and driving Westbound in the Eastbound lanes when he slammed into another car head-on. Hall was taken to the hospital then booked into jail. One person in the car he hit was treated for minor injuries.

The crash sent shockwaves down Dudek's spine. Several years ago, her family came within inches of a wrong-way driver. Luckily her husband swerved before they got hit.

From Saturday to Monday morning, investigators were at the scene of three wrong-way incidents. The first on the Courtney Cambell Saturday around 3:22 AM.

The second happened just over an hour later on I-275 around 4:44 a.m. FHP says that crash killed the wrong-way driver, A 39-year-old Aryail Marie Gomez, who was traveling Southbound in the Northbound lanes of the interstate in Hillsborough County. The crash sent 30-year-old Brittany Castilleja, the driver of the car she hit, to the hospital.

The latest incident happened Monday morning on the Veterans Expressway. FHP troopers say around 1:22 a.m., a trooper stopped a female wrong-way driver near Gunn Highway before a crash occurred. Marileydi Gonzalez-Meza, 28, of Pinellas Park was cited for DUI and driving with a suspended license.

“I think it’s terrible. They gotta do something to fix it," John Hansen said.

“Most definitely. Every major highway should have one or something like it,” Alwin DaSilva added.

The sensors added along the Howard Frankland Bridge cost taxpayers about $100,000, but FDOT is confident they are saving lives.

Another possible solution is GPS. GPS devices know when you’re turning the wrong way onto a road and now the N.T.S.B. is advocating for car and cell phone manufacturers to add alerts to tell drivers when they’re going the wrong way.

FDOT leaders say it also boils down to drivers making better choices. “We have to ask for the public’s responsibility to drop drinking and driving. That’s what 99% of these crashes are,” Carson explained.