Search for Plant City carjacking suspects ends with one dead, another hospitalized, officer run over 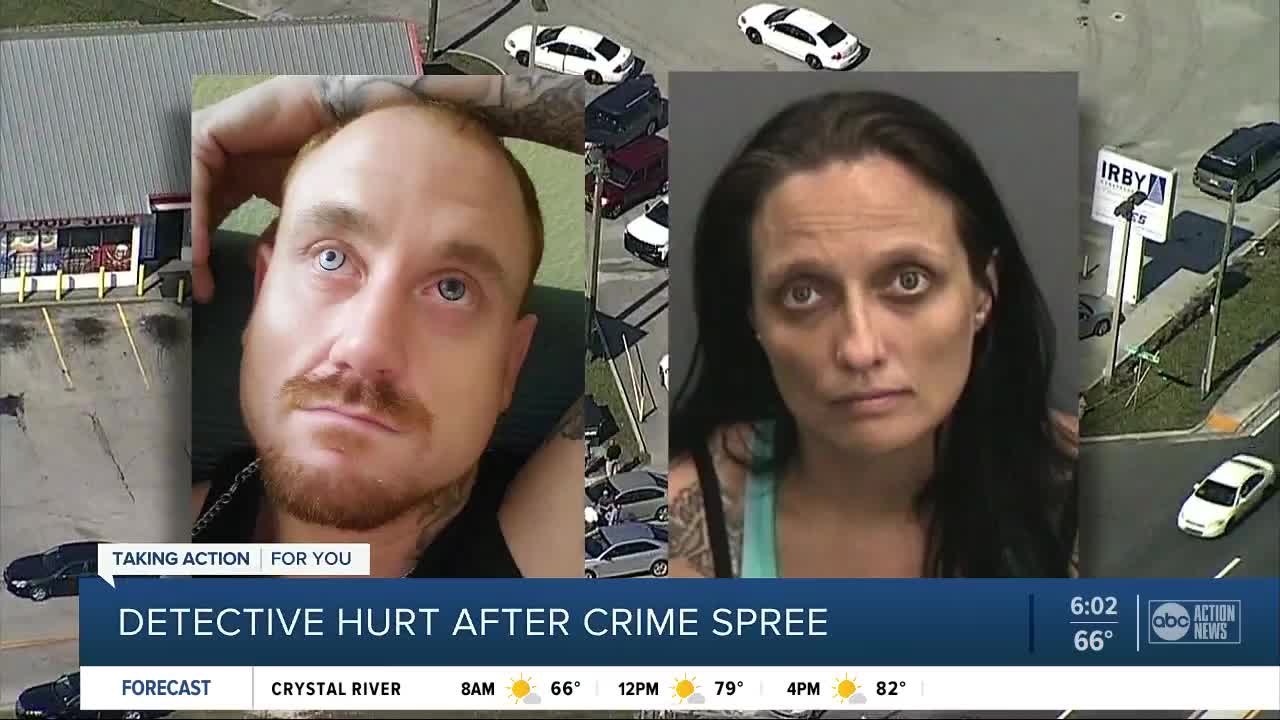 One suspect is dead and another suspect is in the hospital after trying to elude authorities in connection with a carjacking incident in Plant City. Story: http://bit.ly/3a9UMuN 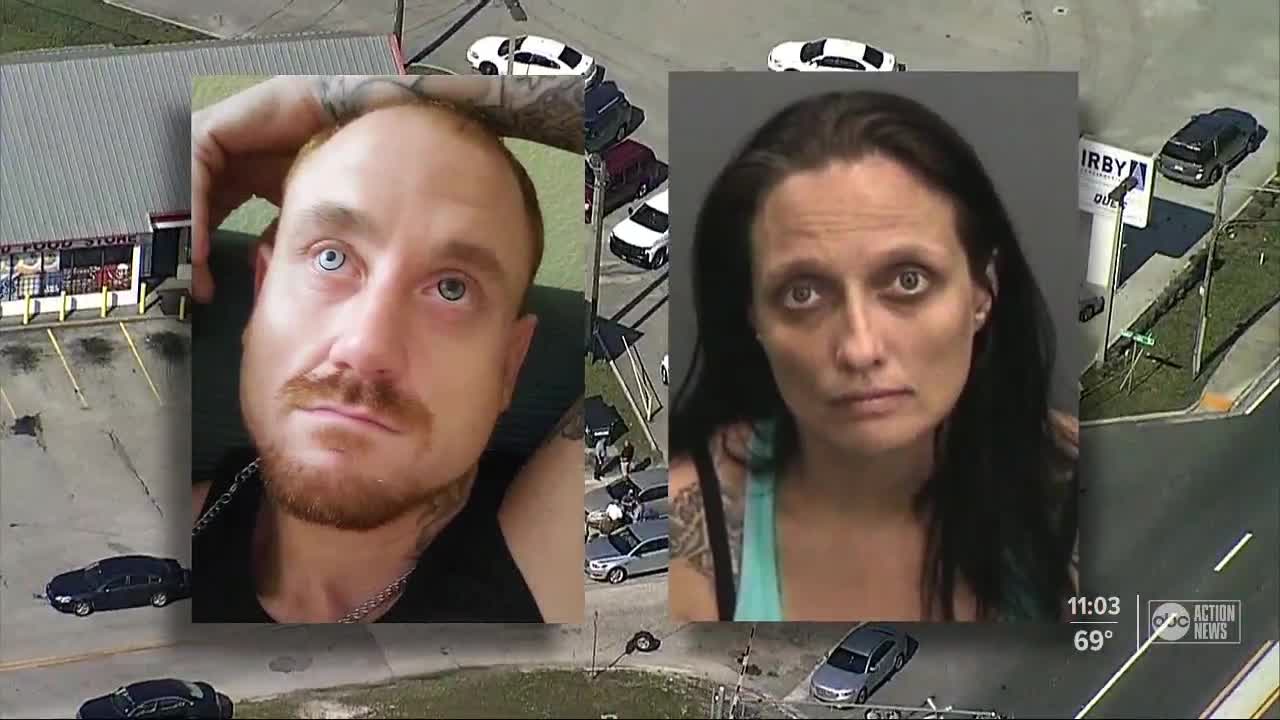 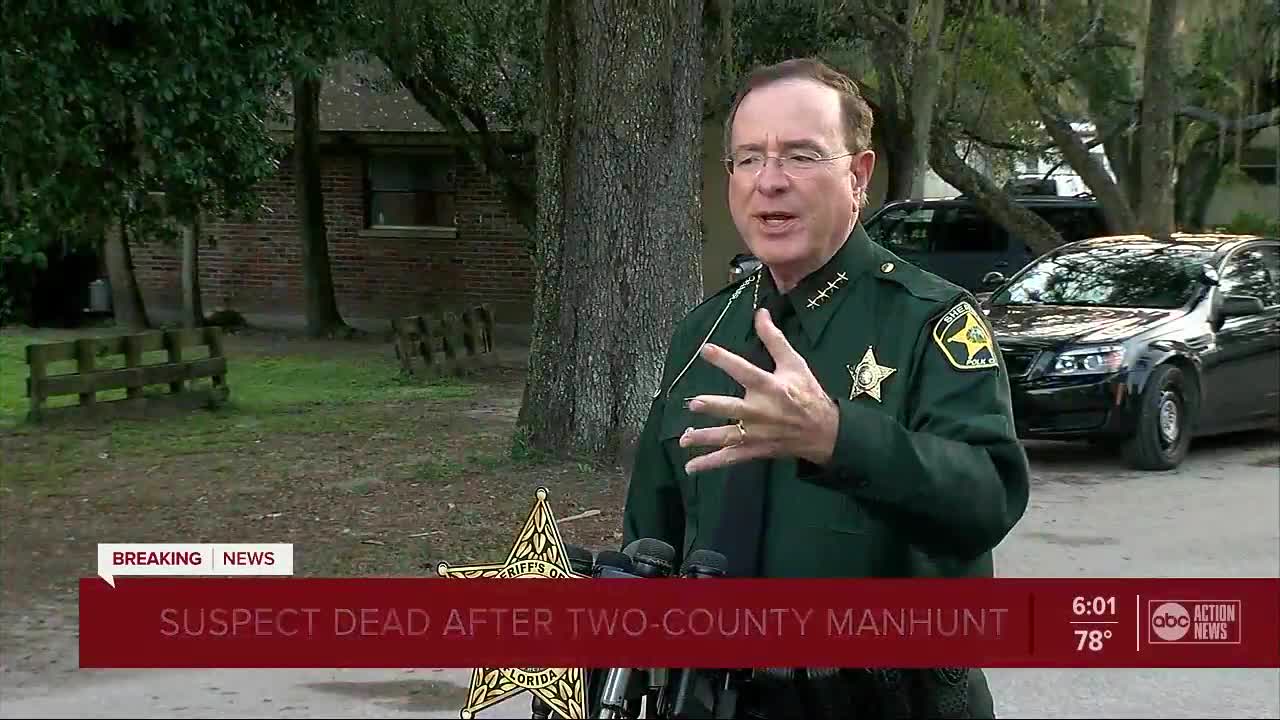 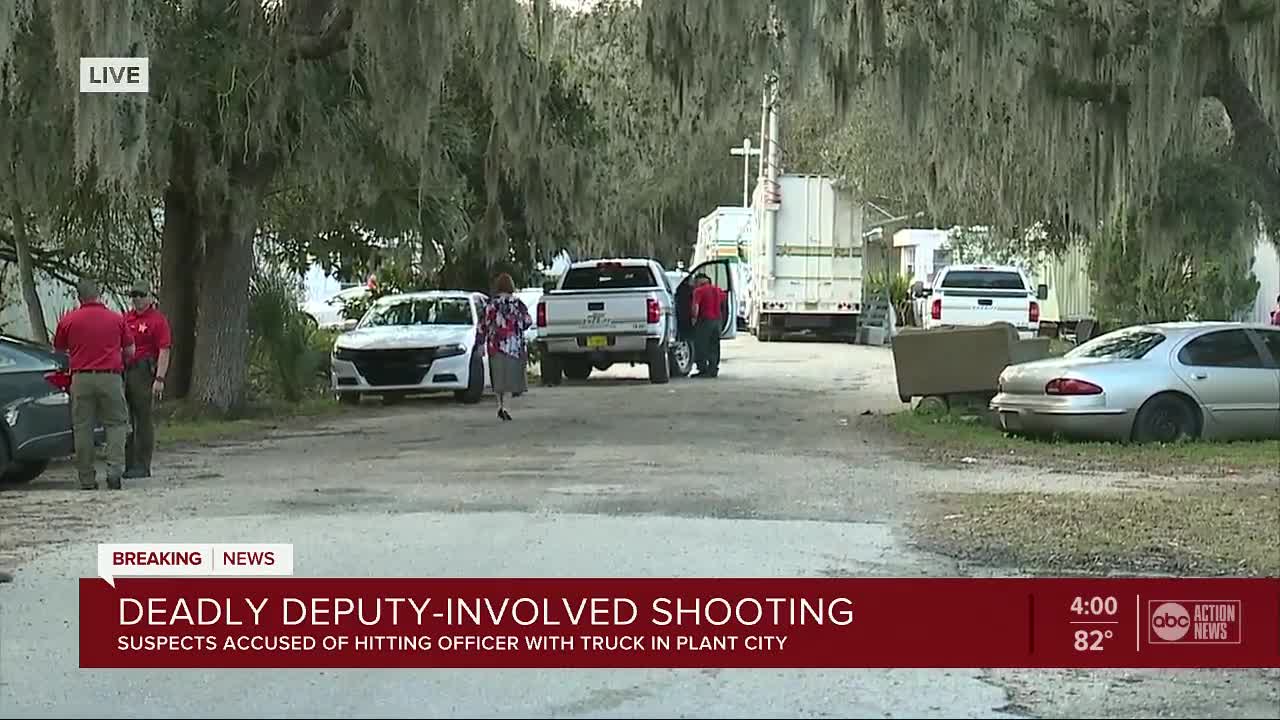 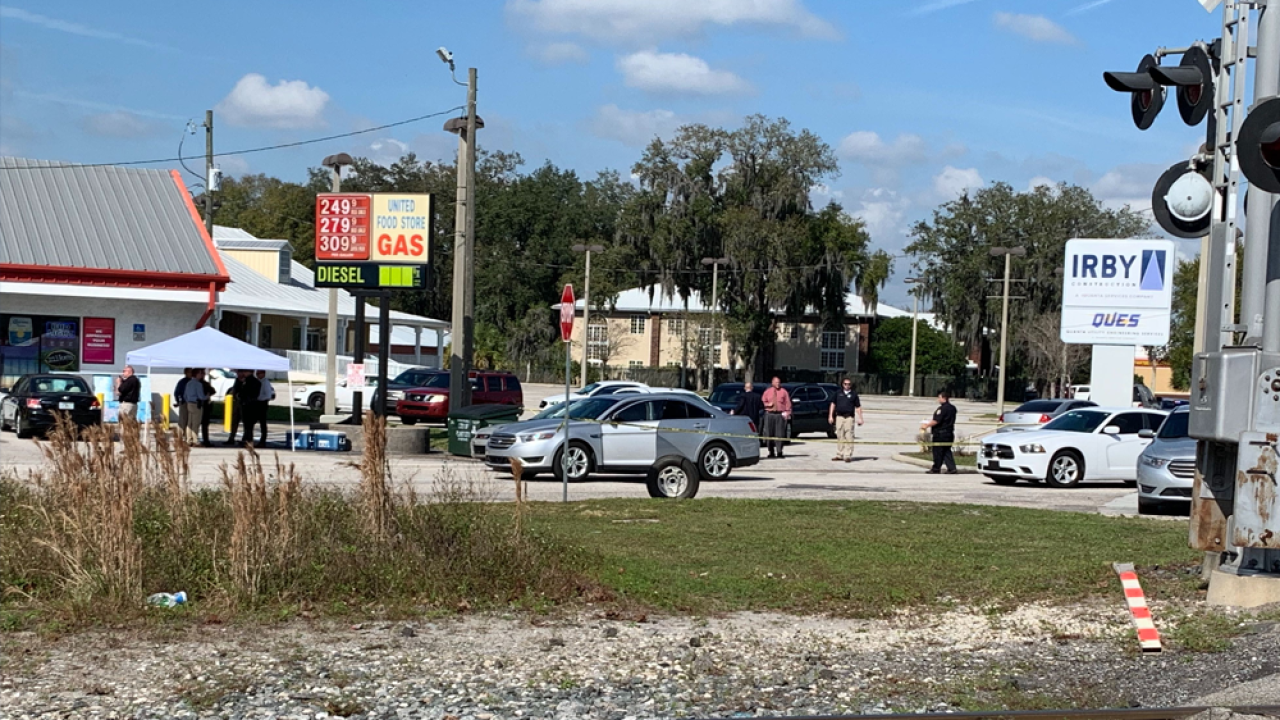 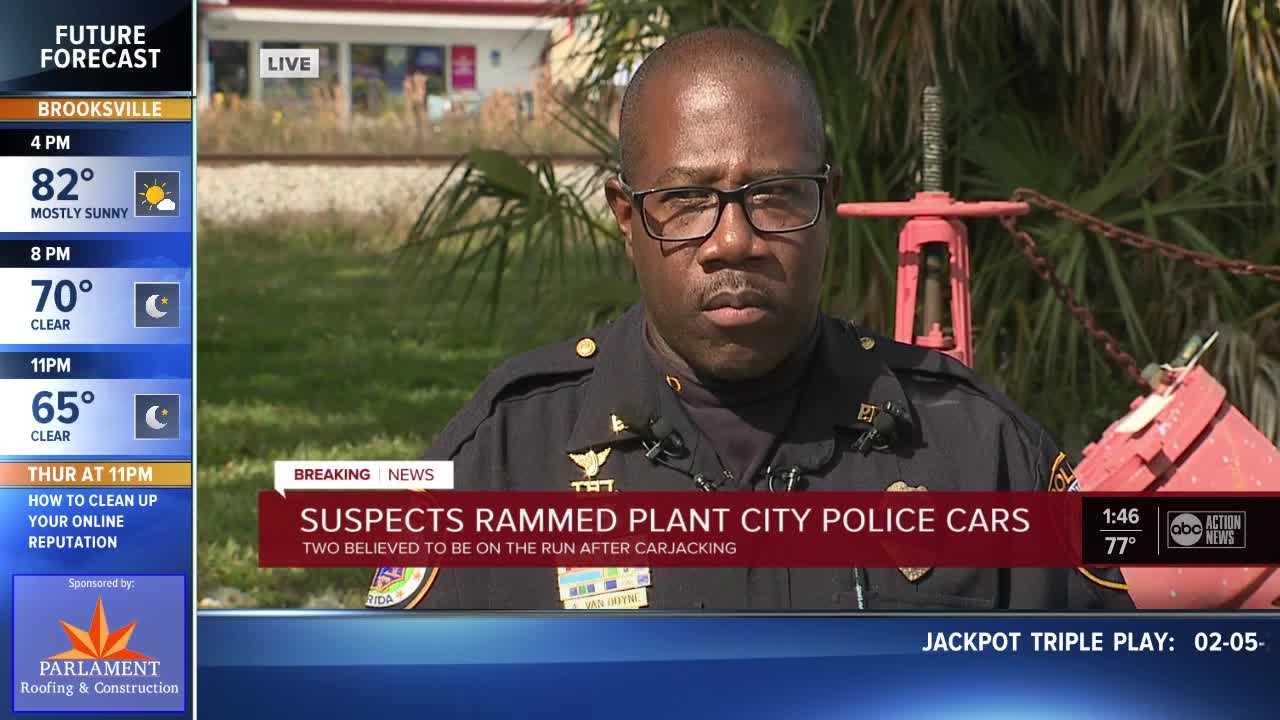 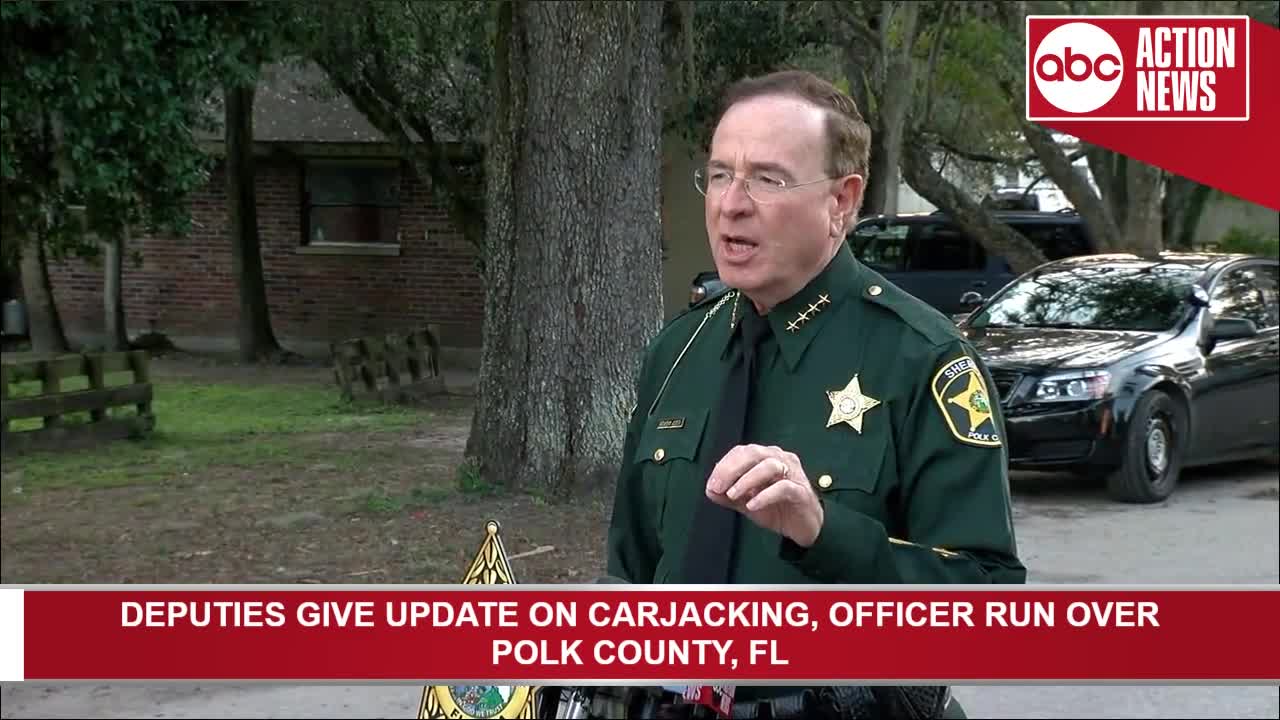 PLANT CITY, Fla. — A male suspect is dead and a female suspect is in the hospital after trying to elude authorities in connection with a carjacking incident in Plant City.

Earlier on Wednesday, undercover detectives with the Plant City Police Department were conducting surveillance to serve an arrest warrant.

Polk County Sheriff Grady Judd described one of the suspects, 31-year-old Aaron Phillips, as a "pedigree thug." Sheriff Judd went on to say the female suspect who was with Phillips during the carjacking and the manhunt, 36-year-old April Thompson, had outstanding warrants.

Sheriff Judd said the warrant was issued for Phillips, who was wanted for several felonies including kidnapping.

When detectives initiated a traffic stop, the driver of a silver pick-up hit two unmarked police vehicles and started driving toward an officer standing outside of an unmarked cruiser.

Officers opened fire on the truck, hitting Thompson in the leg, and one officer was run over in the process. Sheriff Judd said investigators aren't completely sure which of the two suspects were behind the wheel or sitting in the passenger seat when the officer was run over.

The incident occurred around 11 a.m. near the intersection of Sammonds Road and Alexander Street.

The officer was taken to a nearby hospital in serious condition, and he remains in intensive care as of Friday. Police say he is expected to remain in the hospital for at least several days.

Plant City PD did not release the officer's name but said he had been with the department for about five years.

A short time later, police say the suspects drove to the 4400th block of Cooper Road in Plant City and carjacked a driver in a blue 1990 Toyota Tacoma pickup truck.

The victim was not injured.

Later in the afternoon, the Polk County Sheriff's Office jumped in to help the search after receiving a call that the two suspects may be in the Mulberry area.

The search for the suspects ended after Phillips was shot and killed by a deputy and Thompson was shot in the core area.

Thompson was transported to the hospital and is expected to survive.

None of the Polk County deputies were injured in the encounter with the two suspects.

Wednesday's incident comes just one day after a deadly carjacking in Plant City turned into what police called a "violent rampage."

They say 27-year-old Jeffrey Darnell Thomas tried to carjack at least two vehicles, and opened fire at one of them. He hit Agustin Pardo, who died from his injuries at a local hospital.

Deputies and Plant City Police quickly responded to the area and tried to set up perimeter around Thomas. He was located by a K-9 deputy and Plant City Officer. They say he was using tall grass and nearby buildings to hide.

Investigators say he opened fire at officers and was hit when an officer fired back. He was taken to a local hospital where he remains. His condition is unknown.