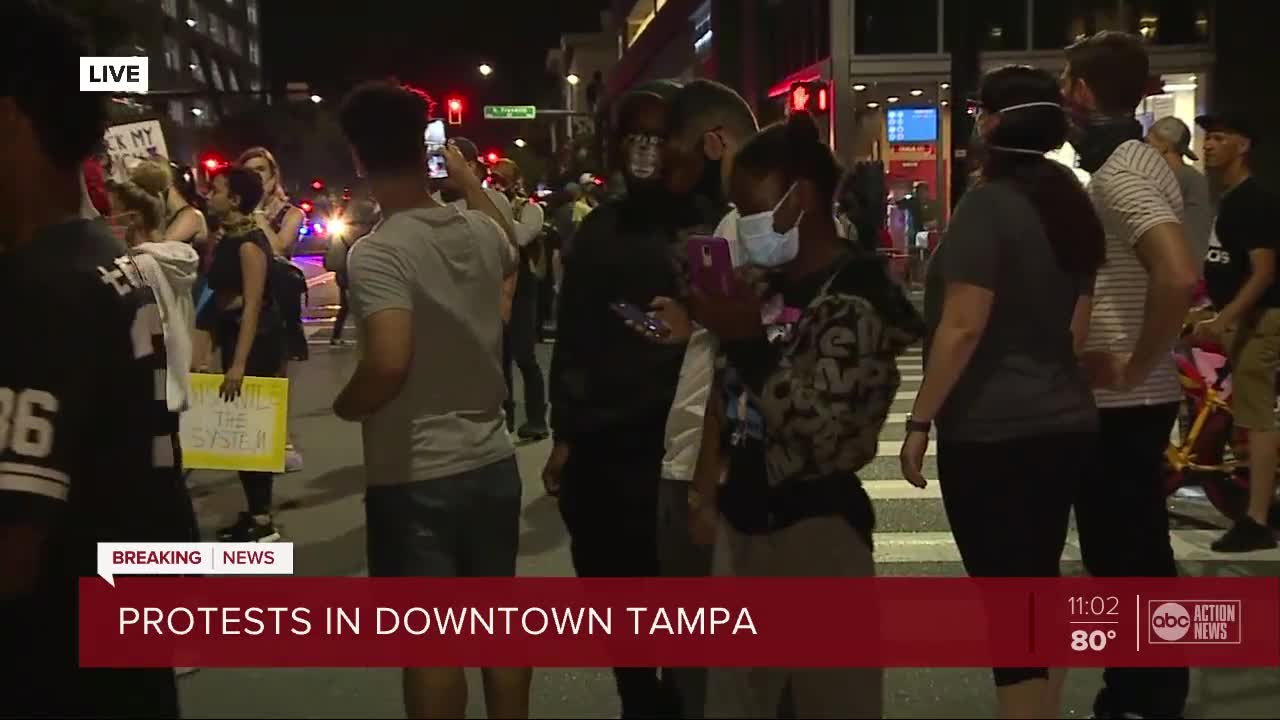 Peace protests have continued in downtown Tampa, making what could be a very, very long night for law enforcement Tuesday night. 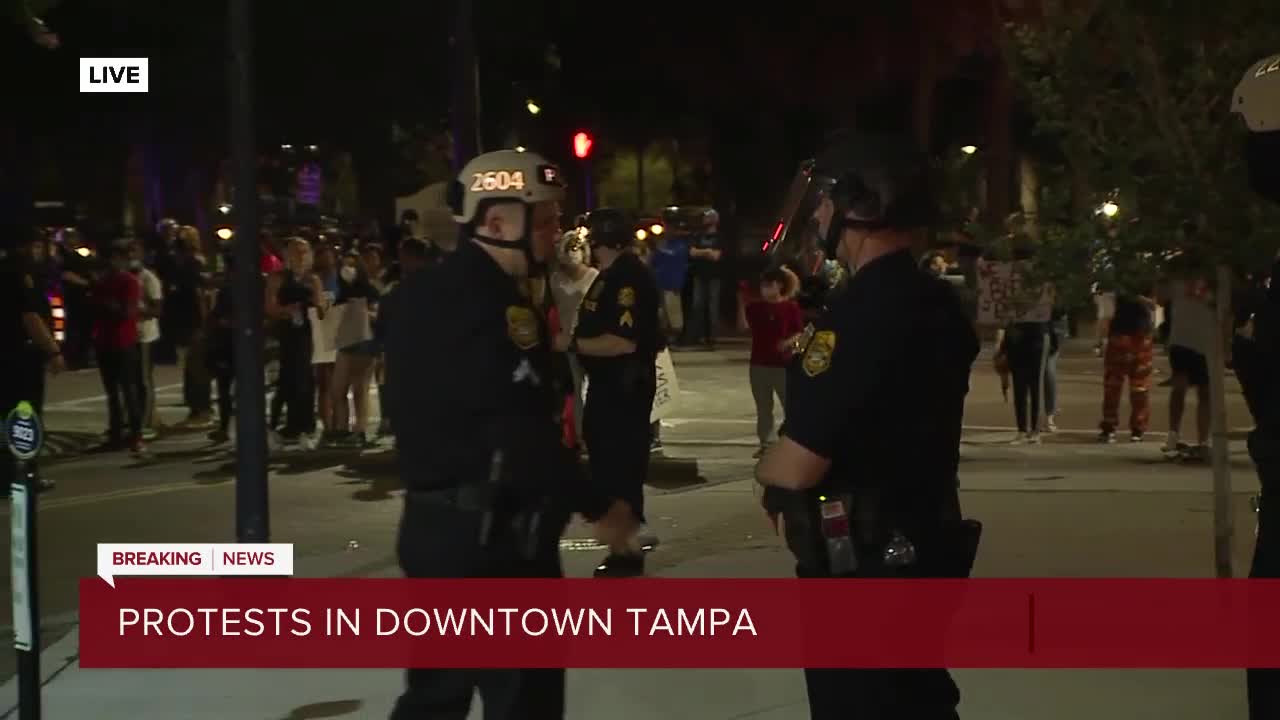 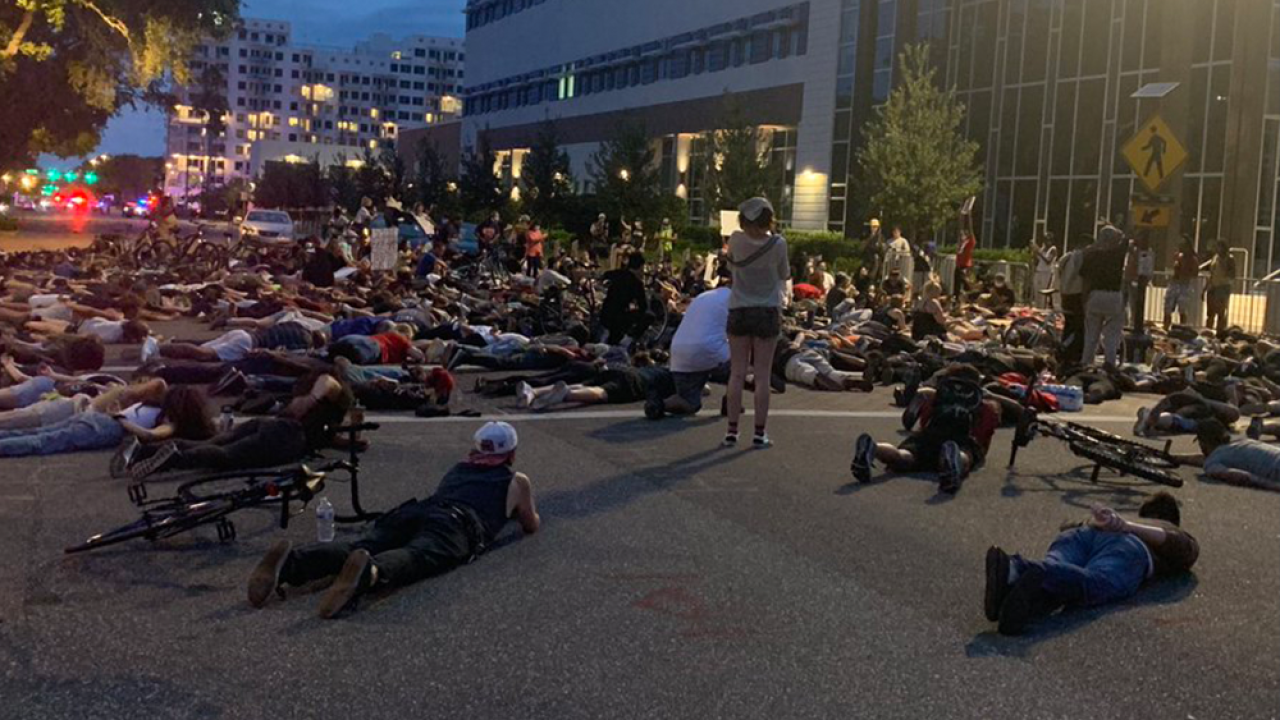 TAMPA, Fla. — As protests continue across the country in the wake of George Floyd's death, several major roads were shut down in the Tampa Bay area as folks marched peacefully for justice.

Large groups of protesters marched along West Kennedy Boulevard near South Tampa and made their way to Franklin Manor, a popular nightspot.

A co-owner of Franklin Manor resigned from his position with Nocturnal Hospitality after receiving backlash for comments he posted on Instagram. Oh Monday, Instagram user @officialthebody posted about Pescante leaving the comment "just shoot them all" on one of her post.

St. Petersburg residents who didn't take to the streets participated in a sign of unity demonstration Tuesday night. Residents in the city stood silently outside of their homes for a short period of time to show solidarity.

Earlier in the day, protesters kneeled on the road at an underpass on 16th Street South.

In downtown St. Petersburg, protesters were seen laying on the ground just outside the police station.

A little after 9:30 p.m., hundreds marched from downtown St. Pete to Beach Drive.

The protest ended with 23 people arrested after police told demonstrators to disperse after some people started launch incendiary devices as they marched.

Peaceful protests for about 10 hours today. Thank you to those who conveyed a message without violence, fireworks. @StPetePD once again accommodated and provided space for the marchers all day. Once some protesters arrived with incendiaries, an unlawful assembly was declared.

A large crowd gathered at the intersection of Big Bend Road and U.S. 301 in Riverview.

The peace protests shut down U.S. 301 from all directions near the area.

Here’s the crowd at Big Bend Road and US 301. Sheriff tells me they can stay so long as they remain peaceful and so far that’s how it’s been. @abcactionnews pic.twitter.com/DUmWyhOgVm

My conversation moments ago with @HCSOSheriff Chad Chronister about the ongoing protest at Big Bend Road and US 301. One the Tampa Bay’s busiest intersections is closed for this peaceful demonstration. @abcactionnews pic.twitter.com/PbS0DBsivy

Deputies told the protesters to clear the road late Tuesday night. They left peaceful around 10:45 p.m. No arrests were made.

The protest was mostly peaceful. Deputies shot a non-lethal round at one person seen throwing bottles at deputies and officers. Authorities say the suspect ran off to avoid being arrested.

The Hillsborough County Sheriff's Office reports the only arrest Tuesday at protests in the county occurred in Plant City. Deputies say 29-year-old Vintwan Brooks removed a Confederate flag from the vehicle of a person who went to the demonstration and then attempted to burn the flag. Brooks is charged with Inciting a Riot and Resisting an Officer without Violence.

Officials say officers handcuffing Brooks were pepper sprayed by another protester who ran off to avoid arrest.

"I commend both my deputies and officers with the Plant City Police Department for their restraint in dealing with agitators and their willingness to show the citizens we serve that we are listening to their concerns and will always be there to protect them," said Sheriff Chad Chronister. "I am happy to say that these protests ended with no injuries and no damage to property in either Plant City or Riverview."