Leaders from the black community, the NAACP and ACLU reached out to the Hillsborough Sheriff’s Office and Tampa Police Department to discuss policy changes. 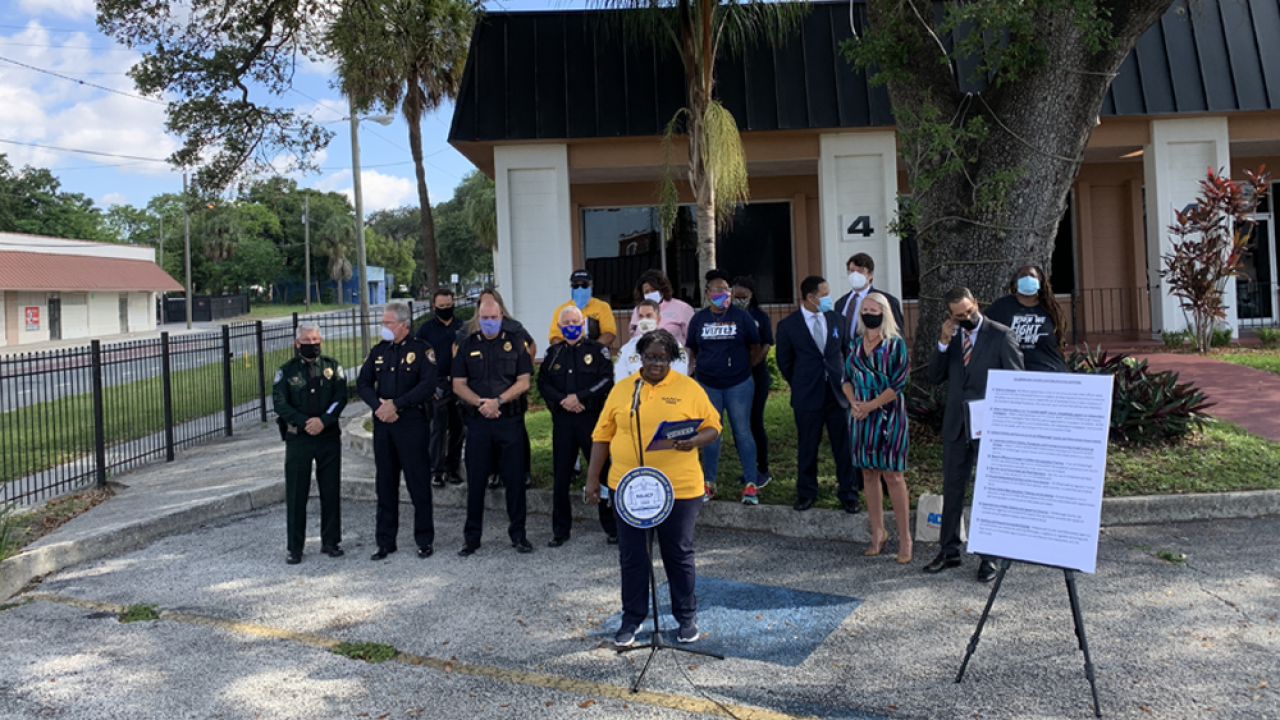 TAMPA, Fla. — The George Floyd case has led to a movement around the nation for policy changes.

Leaders from the Black community, the NAACP and ACLU reached out to the Hillsborough Sheriff’s Office and Tampa Police Department to discuss policy changes.

They met and came up with five areas to start with.

All officers will be required to intervene and stop other officers they see using excessive force or when other procedure violations happen.

There will be more training on crowd control and deescalation.

Agencies will ban the use of chokeholds and expand the use of body cameras.

They will also make sure an independent investigator from the Florida Department of Law Enforcement looks into all fatal shootings or deaths while in police custody.

“That removes even the mere perception that there’s any type of impropriety. Blue covering blue. That’s a big step in building trust through transparency,” said Hillsborough Sheriff Chad Chronister.

“Although the NAACP is the oldest, baddest, historical organization we got a new group of people that is emerging. And that group has made it very loud clear that Black lives matter. We have to respect that generation that don’t trust law enforcement,” said activist Connie Burton.

Training is already underway and Sheriff Chad Chronister says his deputies are on board, but the culture for change has to start at the top.

While the protests and the unrest started after George Floyd’s death, Lewis says the problems in Tampa started long ago.

“This city is suppressed and has gone through systemic racism for the past couple of years and we have had enough," she said.

Since 2015, oversight of the Tampa Police Department is handled by the Citizen Review Board.

But Lewis is among critics who say the board never finds wrongdoing by police.

“The citizen review board has been an embarrassment to the city of Tampa and the community. It was designed for failure by the past administration.”

They plan to continue meeting with law enforcement officials every month to continue communication and reform.

Read the complete press release below:

Law Enforcement contacted the NAACP to set up a meeting after a June 9 press conference held by the NAACP and ACLU calling for a completely revamped independent police review board with investigatory power. The Tampa City Council will be discussing this issue in a proposed workshop. In the meantime, Hillsborough Law Enforcement Agencies are agreeing to step up and the follow uniform policies and will meet monthly with the ACLU and NAACP to discuss several additional policy proposals put forward by the community. The policy proposals agreed on by all agencies thus far are as follows:

1. Duty to Intervene: All officers would have a duty to intervene and stop other officers when they witness the use of excessive force or a violation of other Standard Operating Procedures. All officers would also have a duty to report the use of excessive force or other violations of the Standard Operating Procedures. The required report will be filed without any retaliation.

3. Uniform Policies and Procedures for all Hillsborough County Law Enforcement Departments: Implement Uniform Policies, Procedures, and Training Concerning Crowd Control at Protests: A. Present uniform protest and crowd control training so all law enforcement agencies in Hillsborough County handle lawful protests and crowd control in a uniform manner. B. Require Officers to Engage in Uniform De-escalation Training: Train all Hillsborough County Law Enforcement Agencies to utilize uniform de-escalation techniques and require continuing education periodically in the use of those techniques. C. Ban the Use of Chokeholds and Neck Restraints: Ban the use of Chokehold and Neck Restraints, unless someone’s life is in immediate peril. D. Require Exhaustion of all Non-Lethal Force Options. All officers will be regularly trained on to how to exhaust all non-lethal force options, when possible, to avoid the use of lethal force. E. Annual Implicit Bias Education, Training and Re-training. Annual education and re-education programs to make officers aware of the problems associated with implicit biases and training them in techniques to overcome such biases.

5. Continue and Expand Community Policing: Hillsborough County Law Enforcement Agencies will continue to use community policing techniques, in addition to regularly consulting with local leaders on innovative ways to build trust and improve the relationship with the community.