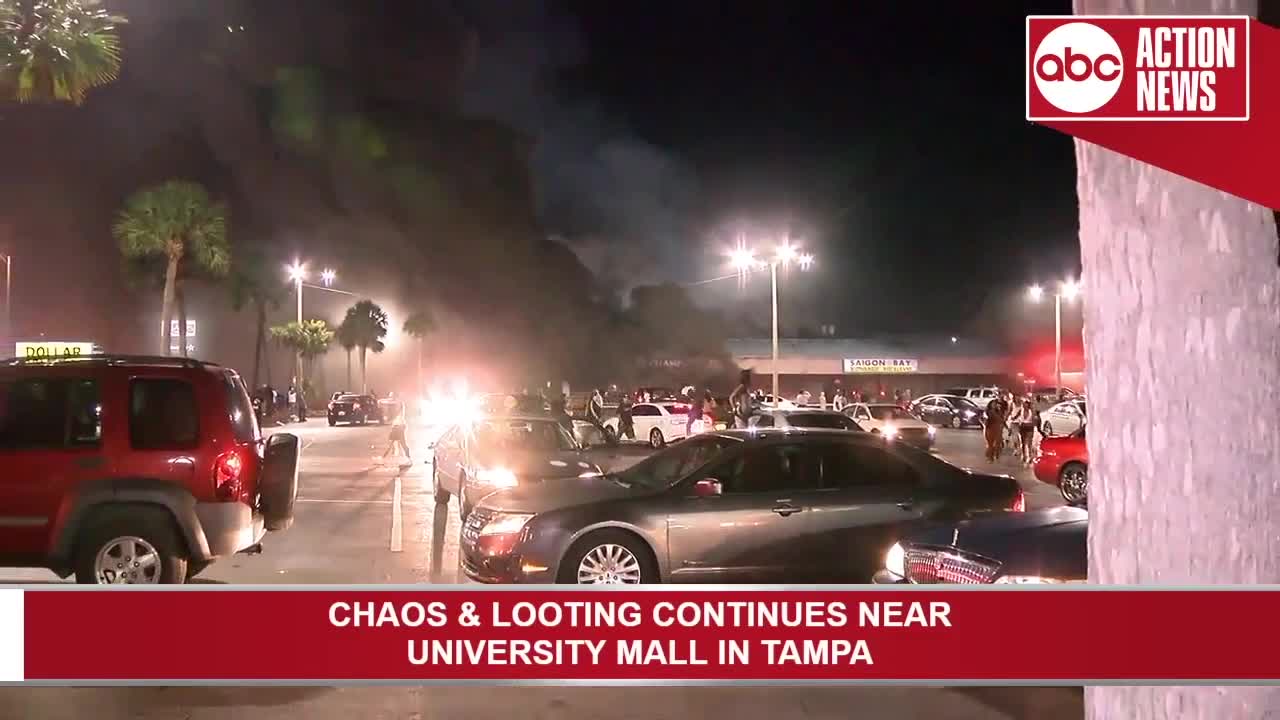 Protesters looted and set a Champs store on fire near University Mall in Tampa on Saturday. 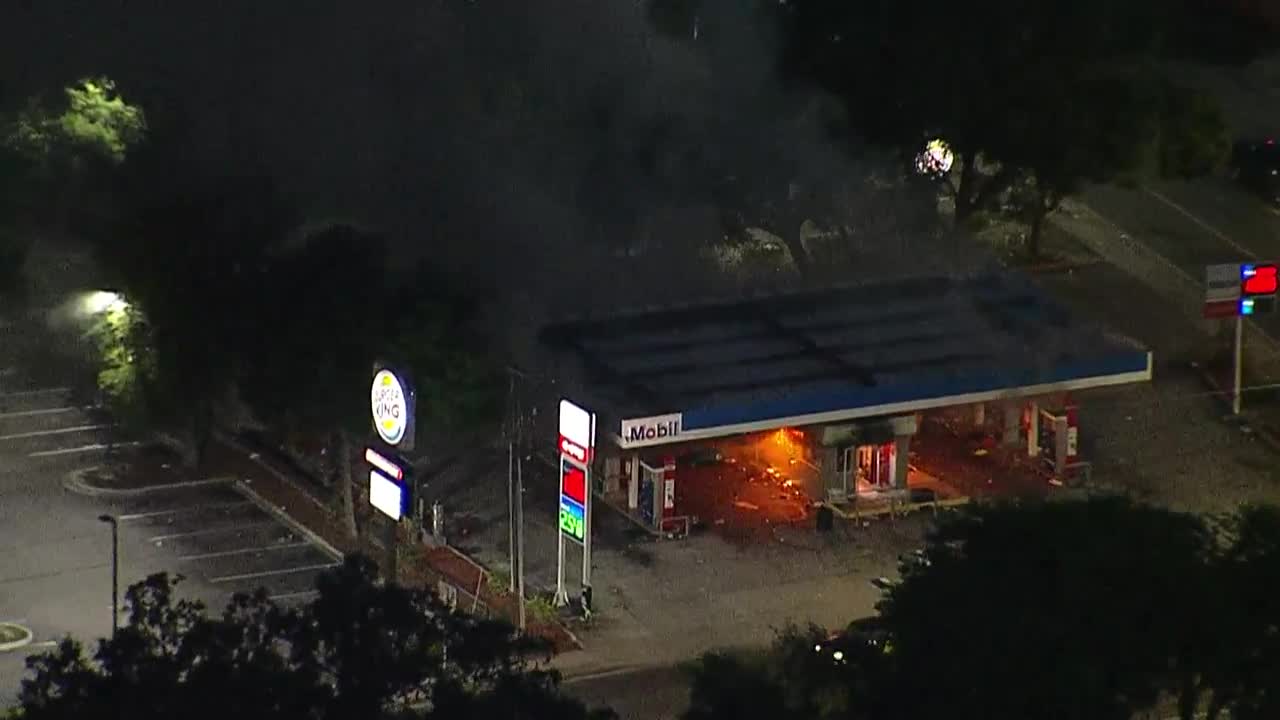 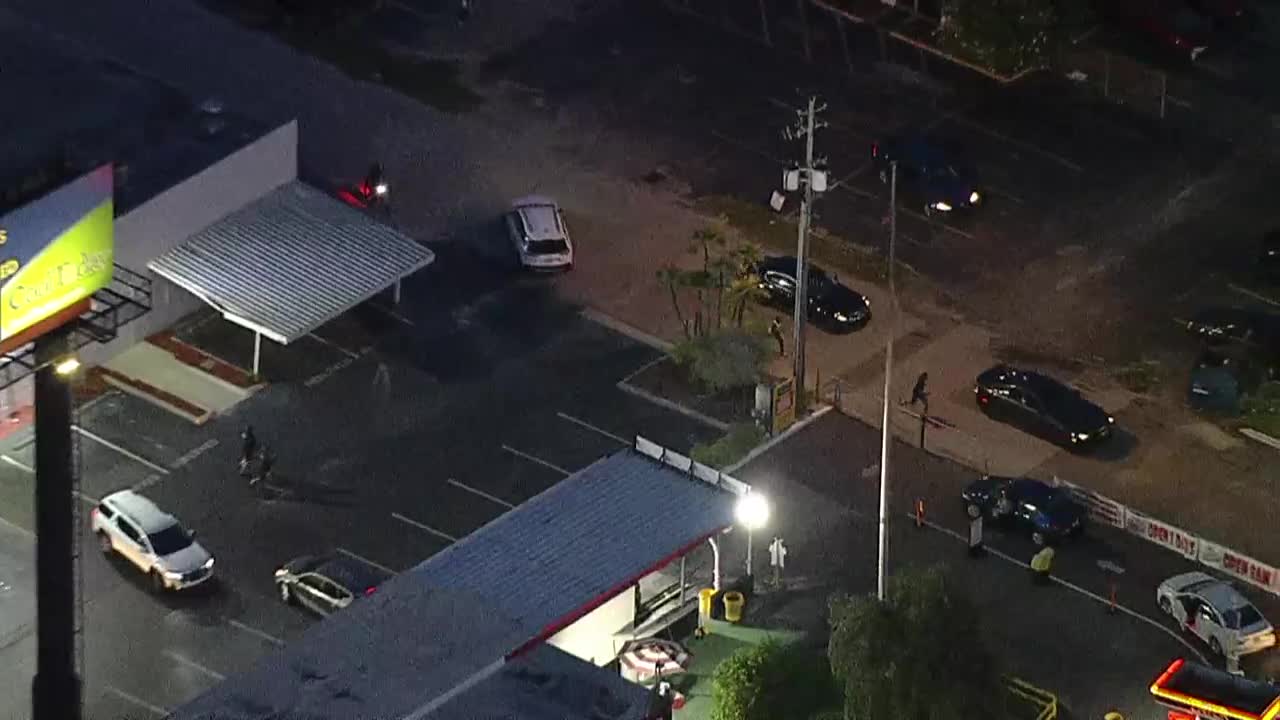 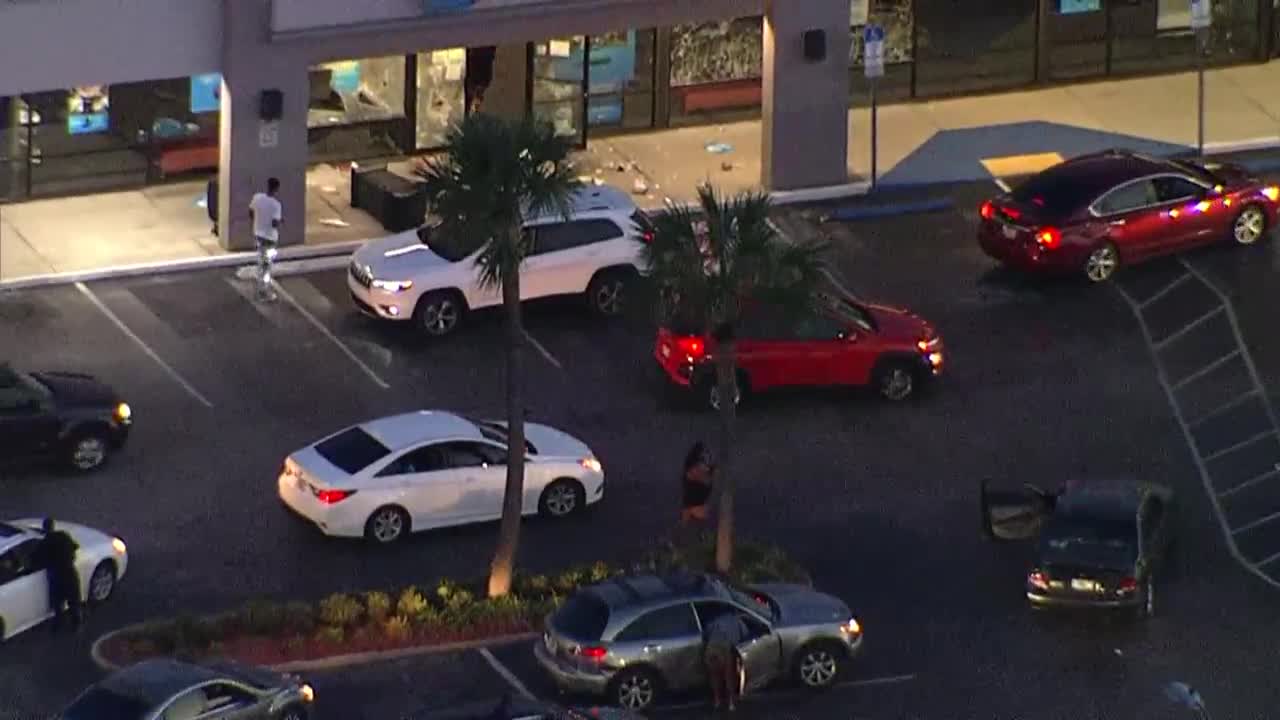 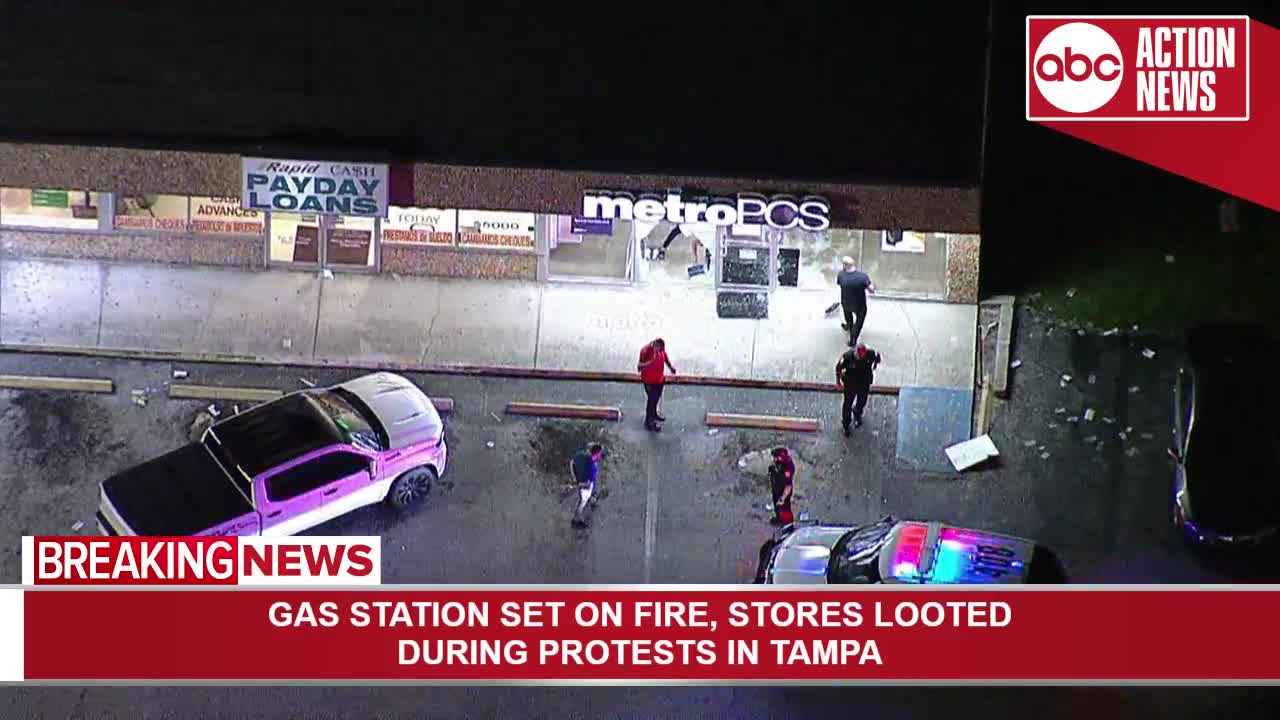 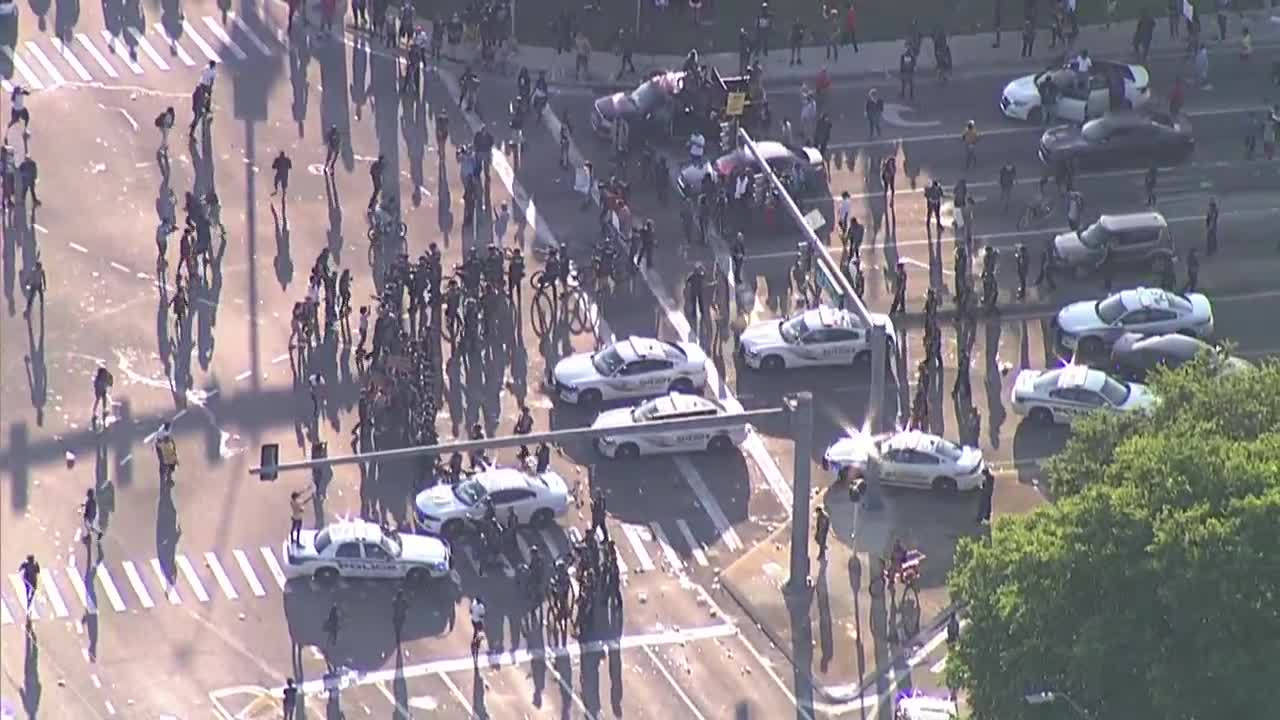 Hundreds of protesters took to the streets Saturday evening as roadways were blocked, several stores looted and some even set on fire.

This comes after the death of George Floyd. Floyd was a 46-year-old man who died Monday night after Derek Chauvin, a now-fired Minneapolis police officer who was charged with third-degree murder on Friday, knelt on his neck for several minutes, despite pleas from Floyd and bystanders.

Update: Second HCSO deputy injured at University Mall. Deputy’s helmet was struck by a firework. It injured his arm as well. He is being transported to hospital by HCSO. #SheriffChadChronister #teamhcso #universitymall pic.twitter.com/YlBS0bERcK

12:49 AM | Champs Sports store set on fire as chaos and looting continues in the streets of Tampa near University Mall.

12:21 AM | Chaos and looting continues in the streets of Tampa near University Mall.

11:35 PM | Hillsborough County deputy rushed to hospital after being hit in head with object at University Mall by protester

UPDATE: An HCSO deputy is en route to the hospital after being hit in the back of the head with a hard object at University Square Mall. Protesters: Violence, looting and vandalism are unacceptable. You WILL be arrested. #SheriffChadChronister #TeamHCSO #universitymall

“While we support everyone’s right to assemble, rioting, looting and vandalizing is unacceptable. We will be on the streets as long as needed in order to keep the protesters and those around them safe, however, we are asking that everyone respect their fellow citizens and the property of others. Anything less is unacceptable.”

11:09 PM | TPD makes multiple arrests.
Multiple arrests made in connection to looting and vandalism along Busch Boulevard, according to the Tampa Police Department.

"A number of those who used the protest as an opportunity to commit criminal acts were arrested for looting businesses including the CVS, AT&T, and Cricket stores," TPD said in a release. "Even under the attack of rocks, bottles, and fireworks being thrown at them, Tampa Police officers remained on scene to ensure the safety of those who wished to protest peacefully and worked to apprehend those with criminal intent."

No officers or peaceful protesters have been injured.

11 PM | A fire was ignited by protesters in the area of University Mall in Tampa.

Protesters begin fire in the area of University Mall

10:10 PM | Deputies deployed canisters of gas in an effort to prevent protesters from getting into the University Mall, according to the Hillsborough County Sheriff’s Office.

10 PM | Officials were outside of the Walmart on Fletcher Ave. after a large protest dispersed.

Walmart in Tampa looted by protesters

9:33 PM | Reporter Michael Paluska was outside the University Mall where approximately 300 protesters gathered.

8:40 PM | The Mobil gas station convenience store on 3003 East Busch Boulevard in Tampa was set on fire. Firefighters were able to quickly get the fire under control inside the store and on the roof by 9 p.m. and prevent it from reaching the gas pumps.

Gas station set on fire amid protests in Tampa

8:40 PM | Protesters were seen breaking into and looting an AT&T store near Busch Gardens.

Looters break into AT&T store in Tampa
Copyright 2021 Scripps Media, Inc. All rights reserved. This material may not be published, broadcast, rewritten, or redistributed.