A Florida fisherman is being treated at a Florida hospital for a skin infection, that has been nicknamed 'fish funk.'

Tampa, Fla. — A Florida fisherman is being treated at a Florida hospital for a skin infection, that has been nicknamed 'fish funk.'

Brian Morgan of Captain Morgan's Fishing Adventures runs a fishing charter out of MarineMax off Gulfport Boulevard. He tells ABC Action News he often gets cuts on his hands while working while on the boat.

Morgan, an experienced boat captain, says he was recently pricked by a fish — and believes he got Mycobacterium Marinum after touching more fish.

He says he started to get a pain in his index finger, but didn't seek immediate treatment until he got painful symptoms.

It turns out — it was a skin infection.

Morgan was admitted to the emergency room at Florida Hospital Tampa where he spent three days getting antibiotics while doctors drained his hands.

"My hands are my tools in my job, it's what I work with, without my hand, I'm not working," he said. 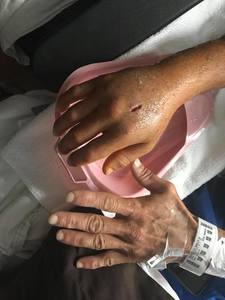 The only positive thing about the timing is Morgan is off the water during this cold front, which would slow business also.

Morgan tells us he's anxious to get back on the water, as this is how he provides for his family.

He is expected to be released from the hospital on Wednesday and will be on antibiotics for the next six months.