According to a flu report released, Hillsborough County has reported 30 outbreaks during the current flu season. 9 of those were reported in child care facilities/schools and two in long-term care facilities.

So far, there has only been one pediatric death in Hillsborough County caused by the flu. 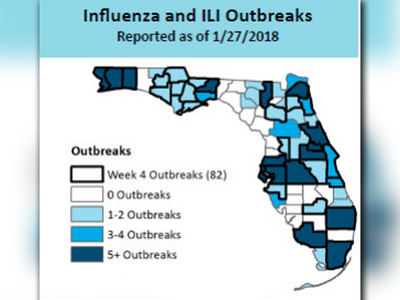 The Florida Department of Health says those who haven't received a flu shot are encouraged to get one now.

"There is no shortage in flu vaccines," said Senior Human Services Program Manager Jylmarie Lewis. "We have a lot and there are many other places people can go to get a flu shot."

While flu vaccines can vary in effectiveness from season to season, they continue to be the best way to prevent influenza infection and serious influenza complications.

Officials say Influenza A (H3) is the strain of flu that is more common this season. This strain is usually associated with more severe illness in young children and adults over the age of 65.

"While the vaccine may not be as effective with the Influenza A (H3) strain, it may prevent serious complications from the flu and help protect individuals from getting another strain," said Epidemiology Program Manager Michael Wiese.

Officials say there are still weeks of the flu season left and it is not too late to get your flu vaccine — which is safe and recommended for everyone six months and older, including pregnant women.