TAMPA — A Certified Nursing Assistant at Arbor Terrace Assisted Living Facility is accused of stealing wedding rings and pawning them off, including one from a 91-year-old woman.

Dian'te Matthew reportedly stole the ring from the 91-year-old victim sometime between June 10 and June 14 at the assisted living facility on Sheldon Rd. The ring was pawned on June 14 at Mr. Money Pawn.

Throughout the course of searching Matthew's pawns, a second victim was identified at Arbor Terrace. That wedding band was pawned on May 26.

Detectives were able to locate both rings and return them to the victims. However, Matthew is still on the loose.

Marilyn Bartholomew, 92, could be a third victim.

Her daughter, Becky Belanger, says her mom traveled around the world, wrote a book, and earned three college degrees.

But now Marilyn's memory is gone. Her family says it's likely Alzheimer’s.

“To see a person like that lose their capacity is very tough," said Belanger.

But one thing Marilyn still remembers is the wedding ring that is normally on her finger. 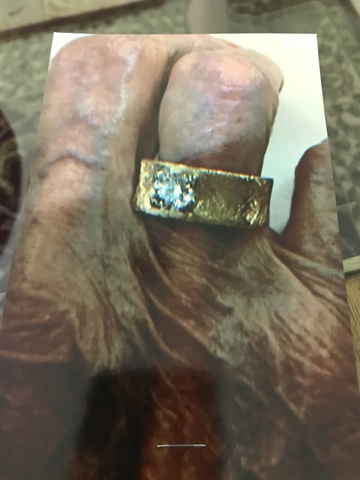 “In all walks of life, in all businesses, you are going to have good people and people that are not honest," said Belanger.

Arbor Terrace says they are taking the thefts very seriously and all employees go through a background check.

The Sheriff’s office says Matthew was fired last week when he didn’t show up to work.

He has an active warrant for Grand Theft, Dealing in Stolen Property, Defrauding a Pawnbroker and Exploitation of an Elderly Person.

Marilyn's ring has some distinctive features including a horseshoe spring and an inscription with the wedding date, 7-1-73. It also might have the couple's names, John and Marilyn.

Anyone with any information in reference to this incident is asked to call the Hillsborough County Sheriff's Office at 813-247-8200 or Crime Stoppers.