The Highlands County Sheriff's Office is planning a vigil to honor one of their own killed in the line of duty.

HIGHLANDS COUNTY, Fla. — The Highlands County Sheriff's Office held a vigil on Wednesday night to honor one of their own killed in the line of duty.

Deputy William Gentry died Monday after he was shot in the head while responding to a call of a dispute between neighbors in Lake Placid, Sunday night, over a cat that had been shot. Deputies later arrested and charged Joseph Edward Ables, 69, for shooting and killing Deputy Gentry.

Deputy Gentry responded to the call with a trainee. Deputy Gentry went to Ables home by himself while the trainee stayed with the neighbor.

"We appreciate what he did everyday of his life," said Laurie Murphy. "He gave so much to others and we're going to continue that. We're never going to give up."

Candles lit up the football field at sunset, illuminating hundreds of faces across the bleachers.

"Not only is law enforcement behind them, so is the entire community all over the state of Florida," said Maureen Calhoun.

Deputy Gentry's family chose not to attend the vigil. Highlands County Sheriff Paul Blackman delivered a message to the crowd that family members are thankful for the community's support.

"William in spirit is with you, is with us, he's looking down on us, proud that you are here tonight," said Sheriff Blackman.

On Thursday, May 10, deputies and officers will bring Deputy Gentry's body home to Sebring. The processional will leave the Medical Examiner's Office around 9 a.m. and head south on Highway 17. The motorcade will turn east on Highway 60 in Bartow and is expected to be at the county line by 10 a.m. The Sheriff's Office is asking residents to come out and line the streets to honor Deputy Gentry. 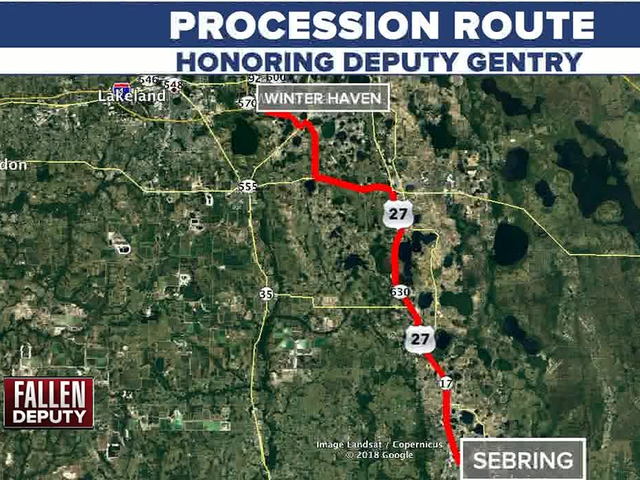 On Monday, May 14, there will be a private viewing for family only.

On Tuesday, May 15, at 11 a.m. at the Highlands News-Sun Center, there will be a law enforcement memorial service where hundreds of officers from across the state and nation are expected to be in attendance. Drivers are urged to avoid the area if possible as traffic issues are expected. It is open to the public.

Sheriff Blackman had trouble speaking about his deputy.

"I think Deputy Gentry was that type of man. He lived life the right way and (there's) no doubt in my mind that he is where he needs to be today," Sheriff Blackman said.

Ables is now charged with first-degree murder. He faces additional charges, including resist officer with violence.

"Over a cat. It's what makes it worse. It's just terrible and I'm a cat lover too. It's just not necessary," Adele Pendleton said.

Pendleton is a friend of Deputy Gentry's mother.

"He was a great guy (and) loved by his mother very dearly. My heart (is) breaking for her," Pendleton said.

Deputy Gentry's friends said he will live in their hearts and memories forever.

"You could appreciate the person he was 'cause he was brutally honest with you in good ways and made you a better person," Highlands County Sheriff's Sgt. Kim Gunn said.

There are chaplains, mental health counselors, and victims advocates available for the entire department. The sheriff says there are a handful of people, including the trainee who was with Deputy Gentry Sunday night that will be required to speak with one of them before getting cleared to return to work.