Hernando County Commissioners unanimously approved change to a residential land use plan, so it can be used for mining, but some are not happy about the change.

HERNANDO COUNTY, Fla. — Hernando County Commissioners unanimously approved a change to a residential land use plan — so it can be used for mining — but some are not happy about the change.

Hundreds of people showed up to tell commissioners why they should or should not allow mining on residential land.

"We do not want any more mining in Hernando County," said Mary Ellen Urban who lives next to the proposed area.

CEMEX, an international mining company that makes cement, already mines more than 11,000 acres of land in Hernando County. They want to expand their current mine by 730 acres onto private property along HWY 50. 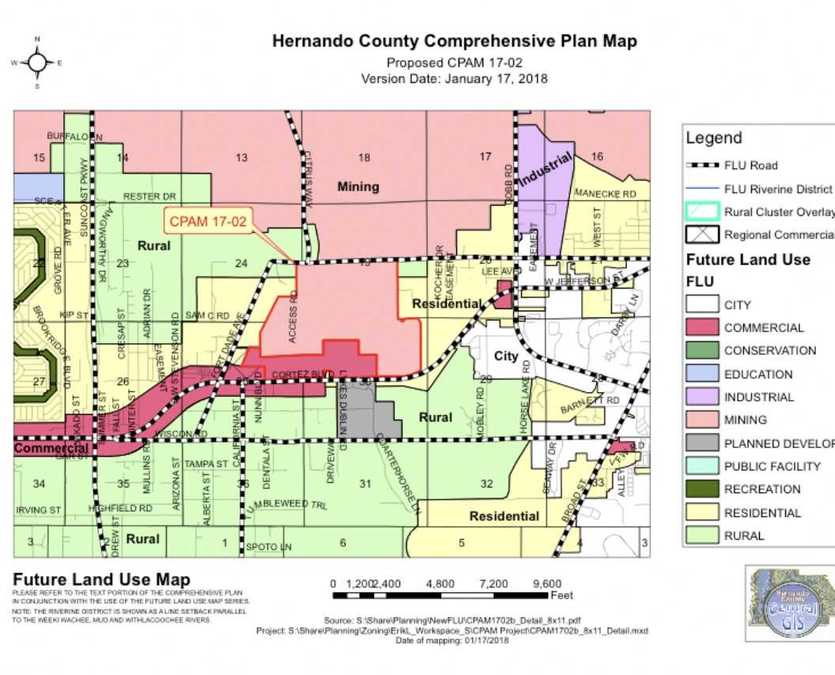 "CEMEX provides a vital service as well as hundreds of jobs and hundreds of thousands in tax revenue that benefit our schools, our county and citizens in general," said County Commissioner Chairman Steve Champion.

But many believe the mine will disrupt the hospital across the street, a historic African American cemetery, and residents who live nearby.

"The location and timing here is terrible," said Urban.

Experts who spoke on CEMEX’s behalf claim there would be no contamination or environmental impact during their next 20 years of mining on the land.

But many against the mine say among many others reasons as to why they disagree with the mining expansion, they don't see a reason if it's not going to create new jobs.

"Doesn’t really make a lot of sense to keep doing something that doesn’t create a reason for people to have a job," said Richard Ross a Hernando County resident of nearly 20 years.

But on Tuesday the Board of County Commissioners unanimously voted yes to the mining expansion that CEMEX claims will bring $2.3 million a year to the county.

"If we want to have better roads, more police officers, better protection in schools, you’ve got to have infrastructure and businesses that want to do business in Hernando County and spend money and create jobs, and that's exactly what CEMEX does," said Commissioner Chairman Champion in explaining why the commissioners voted for the expansion.