Counter-protester arrested at Brooksville protest over killing of George Floyd 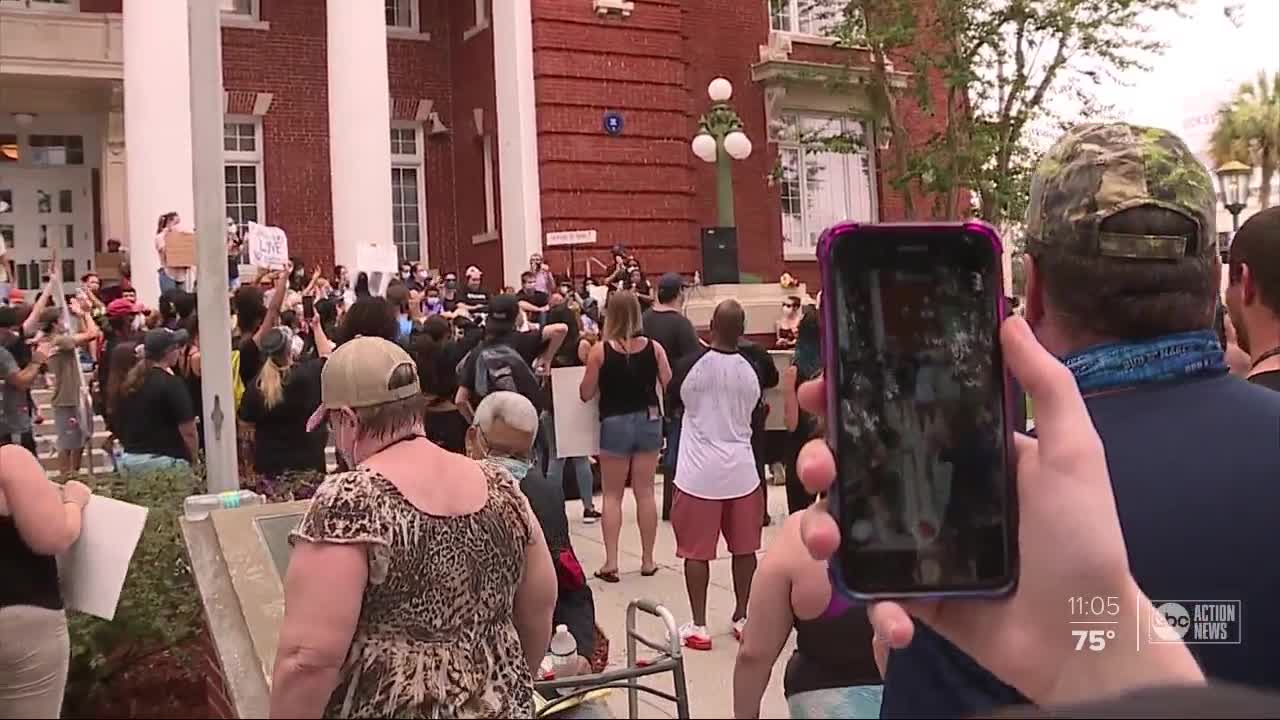 Peaceful protests continued up I-75 into Hernando County. By the end of the night, deputies ended up arresting one person -- a counter-protester. 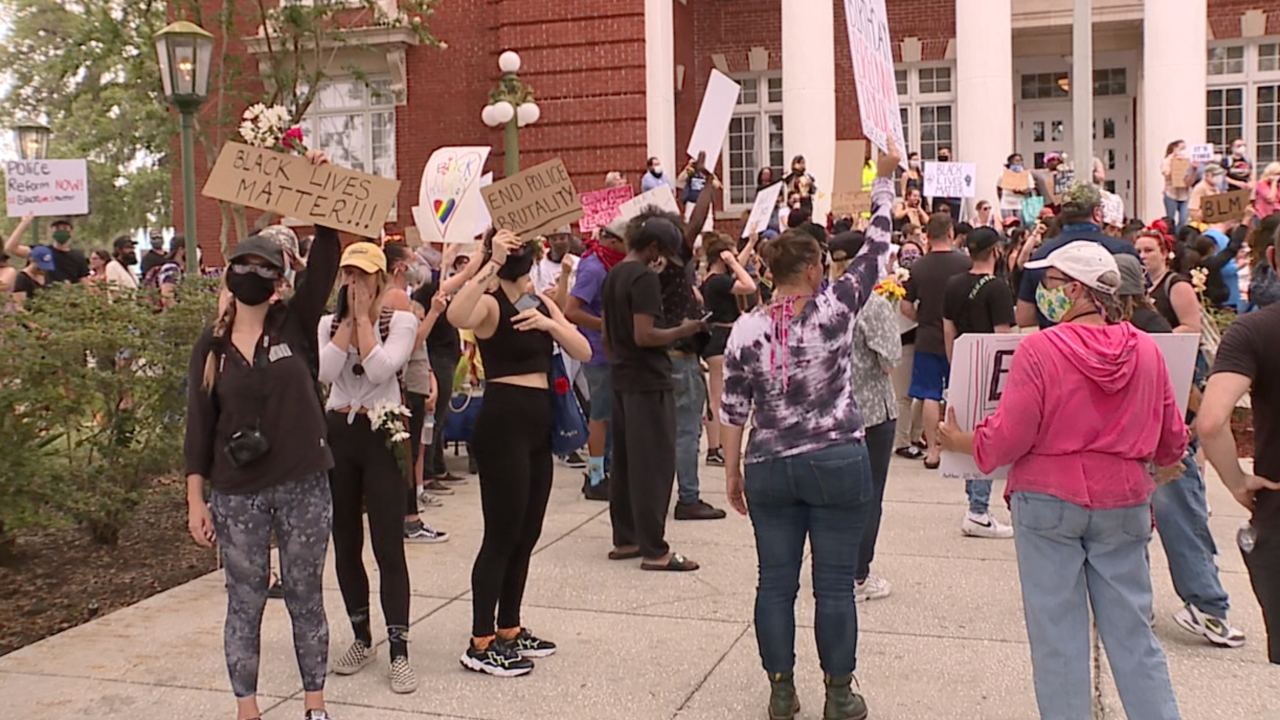 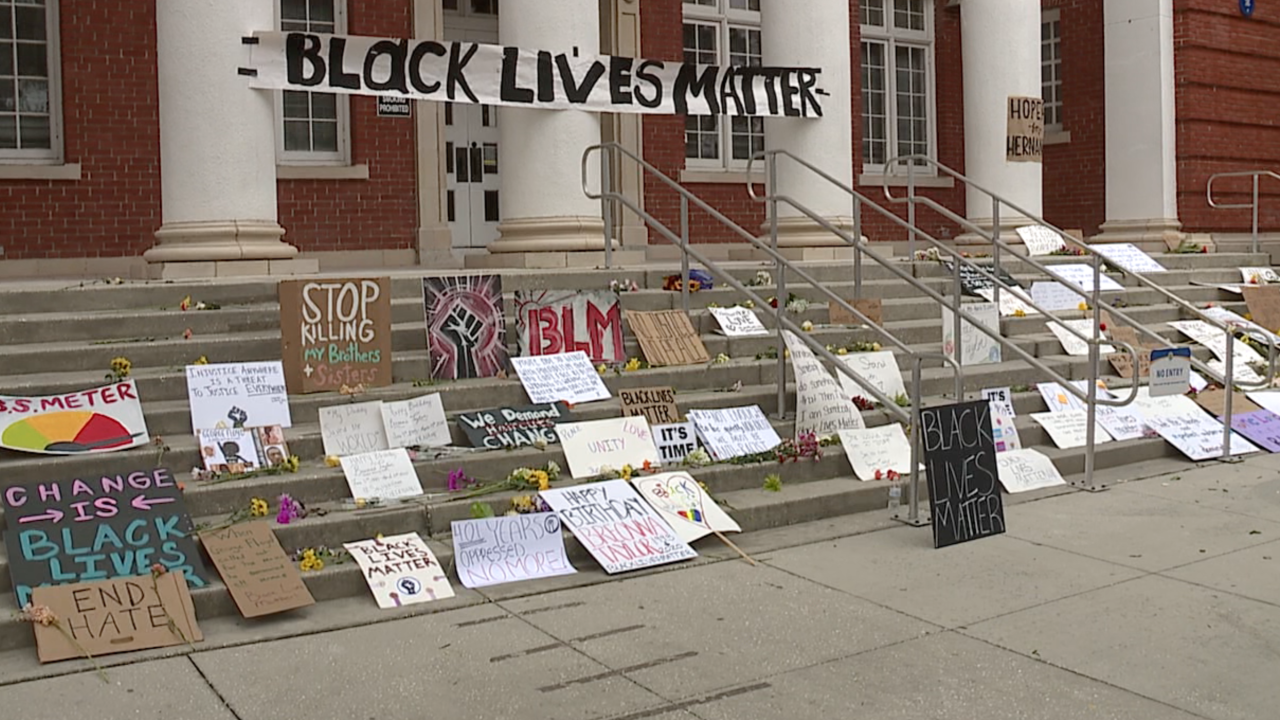 HERNANDO COUNTY, Fla. -- Peaceful protests continued up I-75 into Hernando County on Friday.

By the end of the night, deputies ended up arresting one person -- a counter-protester.

A crowd 250 strong chanted in the name of George Floyd and so many others whose stories they are tired of replaying across the streets of America.

"We’re not here to create a problem, we’re here to create a change and if you can’t get with the movement get behind it," said activist L'Oreal Davis into a mic at the front steps of the Brooksville Courthouse.

Another protester, Reginald McFadden, says a nerve has been touched and protests will not stop until leaders take action.

Davis says what happened to George Floyd is, sadly, not unique. But she says there is a shift in the reaction it incited in the black community and that of allies.

“I’ve been watching black men get slaughtered on TV by police for years now. This is not new," she said. "The only difference now is that we’re sick of it. No one is laying out and taking it and now they don’t know how to react because black people are like ‘This is insane!'"

She thinks the Hernando County Sheriff's Office can start by instituting a policy of mandatory body cameras. She also thinks progress can happen when it comes to the hiring of deputies.

“We need to have a more diverse department because it’s not diverse at all. I don’t see a lot of deputies and officers of my skin color. I don’t." she said.

Across the courthouse stood a small group of counter-protesters. At various times, they responded to the chants of protesters with "What about white lives?"

At one point, came a shout from one of the counter-protesters of "White is right." Off-camera, when ABC Action News questioned the group over this racist exclamation, several members condemned the phrase.

In front of the courthouse, protesters mostly ignored the counter-protesters. As the crowds started to disperse, the sheriff's office says they had to arrest one of the counter-protester after he pulled out a machete when trying to start a fight. David Allen Howell was charged with resisting arrest without violence and improper exhibition of a dangerous weapon.

Protesters also took demands for change online. On Change.org, 15,000 people signed a petition to remove what’s been called the “hanging tree,” with claims it was used for lynching. Another symbol they want gone is a marble statue of a Confederate soldier. Both the tree and marble stand in front of the courthouse.

“We need to start removing the stuff the symbolizes bondage and the city of Brooksville is full of symbolism of bondage," said protester Talyria Preston.

Meanwhile, the Hernando County Sheriff’s Office posted on social media warning people against misinformation online intended to incite fear and anger. The office says it is monitoring this activity.

Part of the post reads, "We are sensitive to, and saddened by, recent events in Minnesota involving Mr. George Floyd and several members of law enforcement. We send our condolences to the family and friends of Mr. Floyd. Sheriff Nienhuis does not tolerate any type of violence or unnecessary force as it pertains to deputies engaging with individuals in the field or the detention center."