The city of Brooksville fired its police chief in the midst of the possibility of disbanding its police department.

Chief George Turner tells ABC Action News that on Wednesday at 5 p.m. two letters were put on his desk that said either resign or be terminated. He tells us he didn’t resign. 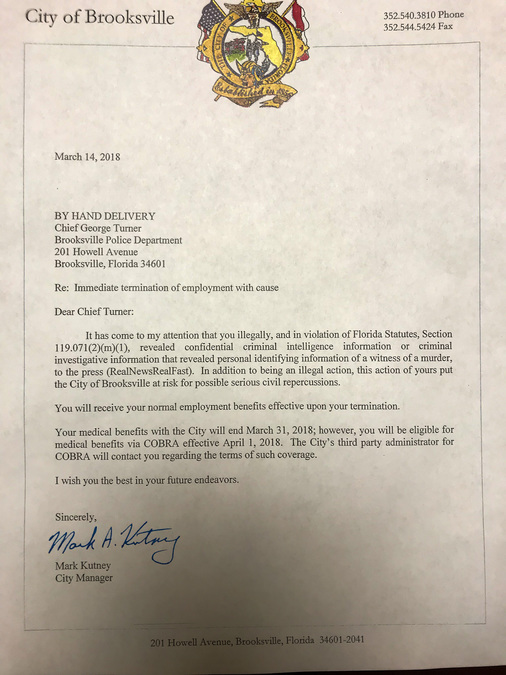 A release sent out from the city of Brooksville on Thursday afternoon stated that Chief Turner, who has been Chief for more than 10 years, was terminated. The press release only stated a “number of factors” as the reason.

We went to city hall to get more answers from the city manager.

"At this point in time I feel that I’ve lost confidence in the chief," said Brooksville CIty Manager Mark Kutney.

ABC Action News requested the termination letter given to Chief Turner, which says in short that the chief “revealed criminal investigation information to the press and put the city of Brooksville at risk of a lawsuit.”

We asked the city manager if there were more incidents than just the one mentioned in the letter. He said yes but wouldn't go into detail.

"There are a number of factors in addition to the letter which allowed me to finally make my decision to end a relationship with Chief Turner," said Kutney.

At a time when the city is actively negotiating for the sheriff’s office to take over law enforcement, those who support keeping the police department are even more frustrated.

"I know that’s one way of cutting the budget, and that’s what its been about this whole time, is cutting the budget." said Brooksville business owner Steve Wyatt, who actively supports keeping the police department.

In his statement Chief Turner said “The city has been on a witch hunt for months. I have always taken the high road and will continue to do so. I will be pursuing my legal options to address.”

As for now Detective Tracey Schofield has been appointed to run Brooksville P.D. until the end of this month when someone else will be appointed as interim chief.