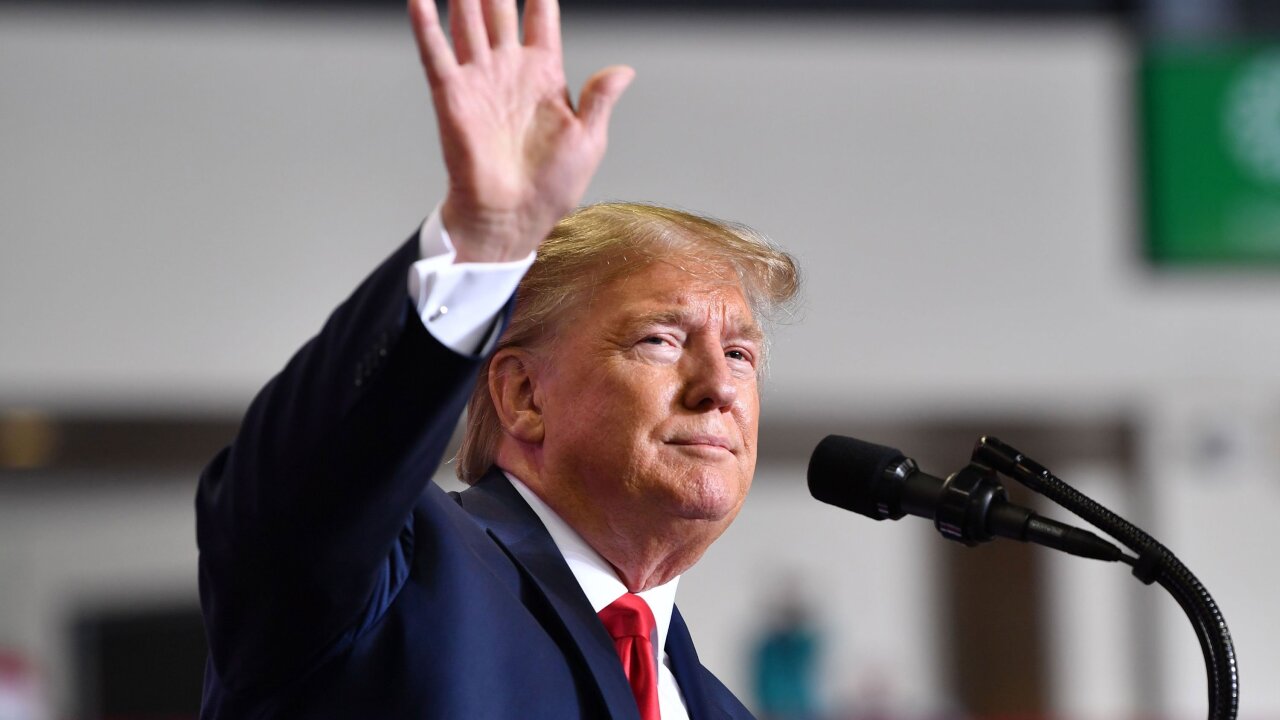 Nicholas Kamm/AFP/Getty Images/Nicholas Kamm/AFP/Getty Images
President Donald Trump's reelection campaign sparred with local Minneapolis officials this week when a local arena threatened to bar the campaign from holding a rally if they did not pay a $530,000 bill -- a fee that was passed on by the city for security services, among other costs. When the Trump campaign threatened to sue over the bill, the arena eventually withdrew the request.

President Donald Trump has signed a $2.2 trillion stimulus package into law at 4 p.m., hours after the House of Representatives passed the 880-page measure by voice vote.

The Senate approved the bill by a 96-0 vote on Wednesday.

The relief can hardly come soon enough. Federal Reserve Chairman Jerome Powell says the economy “may well be in recession” already and the government has reported a 3.3 million burst of weekly jobless claims, more than four times the previous record.

The 880-page measure is the largest economic relief bill in U.S. history.

“The legislation now before us now is historic because it is meant to match a historic crisis," said Minority Leader Chuck Schumer, D-N.Y. “Our health care system is not prepared to care for the sick. Our workers are without work. Our businesses cannot do business. Our factories lie idle. The gears of the American economy have ground to a halt."

The package is intended as relief for a sinking economy and a nation facing a grim toll from an infection that's killed more than 24,000 people worldwide.

I just signed the CARES Act, the single biggest economic relief package in American History – twice as large as any relief bill ever enacted. At $2.2 Trillion Dollars, this bill will deliver urgently-needed relief for our nation’s families, workers, and businesses. #CARESAct🇺🇸 https://t.co/0WnTNFZPZD

The sprawling measure is the third coronavirus response bill produced by Congress and by far the largest. The unprecedented measure covers a lot of territory. It includes stimulus payments for many Americans, student loan changes, expanded unemployment coverage, a $367 billion program for small businesses, and more.

The bill would provide one-time direct payments to Americans of $1,200 per adult making up to $75,000 a year and $2,400 to a married couple making up to $150,000, with $500 payments per child. You can calculate how much you can expect with this Washington Post calculator. Treasury Secretary Steven Mnuchin said he expects most people will get their payments within three weeks.

For any student loans held by the federal government, payments will be automatically suspended until Sept. 30. During the six-month period, the bill says borrowers shouldn’t be charged interest.

Republicans won inclusion of an employee retention tax credit that's estimated to provide $50 billion to companies that retain employees on payroll and cover 50% of workers' paycheck up to $10,000. Companies would also be able to defer payment of the 6.2% Social Security payroll tax.

A huge cash infusion for hospitals expecting a flood of COVID-19 patients grew during the talks to an estimated $130 billion. Another $45 billion would fund additional relief through the Federal Emergency Management Agency for local response efforts and community services.

Democrats said the package would help replace the salaries of furloughed workers for four months, rather than the three months first proposed. Furloughed workers would get whatever amount a state usually provides for unemployment, plus a $600-per-week add-on, with gig workers like Uber drivers covered for the first time.

The package also contains $15.5 billion more for a surge in demand for food stamps as part of a massive $330 billion title for agency operations.

State and local authorities would receive up to $150 billion in grants to fight the virus, care for their residents and provide basic services.

For most people, the new coronavirus causes mild or moderate symptoms, such as fever and cough that clear up in two to three weeks. For some, especially older adults and people with existing health problems, it can cause more severe illness, including pneumonia, or death.

Click here to learn more about COVID-19 and how you can help slow the spread of the virus.