Copyright 2018 Scripps Media, Inc. All rights reserved. This material may not be published, broadcast, rewritten, or redistributed.
Facebook via CNN

THE LATEST ON THE SHOOTING

At least 10 people are dead after a 17-year-old student allegedly opened fire at Santa Fe High School in Texas this morning, sending students fleeing for their lives, the governor said. It was the nation’s deadliest such attack since the massacre in Parkland, Florida in February.

Ten others were wounded, including a police officer who is in critical condition, officials said.

A teacher is among the dead, according to law enforcement officials.

Gov. Greg Abbott called the shooting "one of the most heinous attacks that we've ever seen in the history of Texas schools."

SCHOOL SHOOTINGS IN U.S.: When, where each shooting has occurred in 2018

The suspect, 17-year-old Dimitrios Pagourtzis, is in custody and has been charged with capital murder, officials said. The suspect allegedly wrote in journals that he wanted to carry out the shooting and then commit suicide, but he gave himself up to authorities, according to Abbott.

At the Santa Fe Police Department, Pagourtzis gave a statement admitting to shooting multiple people inside the school with the intent of killing people, according to an probable cause affidavit.

Pagourtzis also allegedly stated during the interview that he did not shoot students he liked "so he could have his story told," the affidavit states.

There were no warning signs and the suspect doesn't have a criminal history, officials said.

Pagourtzis plays on the Santa Fe High School junior varsity football team, and is a member of a dance squad with a local Greek Orthodox church.

A second individual, a person of interest, has been detained, officials said.

Two weapons were used in the massacre -- a shotgun and a .38 revolver -- both of which appear to be legally owned by the suspect's father, the governor said.

"I have no information if the father was aware the son had taken these weapons from the father," Abbott added.

Explosive devices including a molotov cocktail were found in the suspected shooter’s home and a vehicle, as well as around the school and nearby.

Sheriff Judd: Every Polk Co. public school will have an armed officer on campus next week, backpacks banned

Freshman Peter Matuza was in art class this morning when he heard two explosions and ducked under a table, he said.

The gunman shot Peter’s friend with a shotgun before turning and opening fire with a revolver, Peter told ABC News.

Students were running and screaming and one student flipped a table over for cover, Peter said.

Peter said he made eye contact with the suspect, noting, "he had a face of rage."

"He could have killed me right there," he said.

The gunman then “walked through a closet that went straight to the adjacent art room and began opening fire in there, as well,” Peter said. 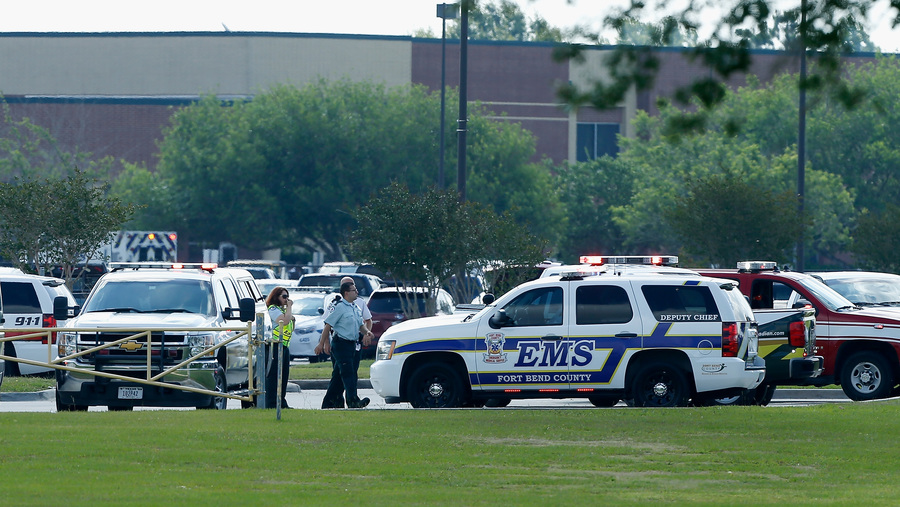 Bryton Sumbles, a former football player for the school, told ABC News that he reported Pagourtzis to teachers in the past because he thought it was odd that he would wear trench coats in 97-degree weather, and he thought it would be easy to hide a gun under the coat. Nothing seemed to come from the report, Sumbles said.

Another former football player, Zefe Nunez, said he remembers Pagourtzis as being incredibly quiet and that he wouldn't talk to anyone. Nunez was in the first classroom that Pagourtzis allegedly fired on, and he flipped a desk to shelter himself and a classmate as glass shattered around him.

Nunez said he ran away while Pagourtzis was allegedly reloading, adding that he was wearing the same black trench coat he would always wear.

"I heard the [fire] alarms and everybody ran out,” tenth-grader Dakota Shrader told KTRK. “At first all we heard was ‘run, run,’ and next thing you know we hear, ‘boom, boom, boom.’”

“Everybody started running,” she said, “and I tried to make it to the safest place that I could as fast as I can. I called my mom right away.”

“She couldn’t breathe, she was having an asthma attack,” her mom added. “I didn’t even know where to find her.”

Among the injured is school district police officer John Barnes, who is in critical condition. Barnes, a retired Houston police officer, was shot in the arm and suffered major bleeding, hospital officials said.

Two school district officers on campus were able to confront the shooter early on, authorities said.

As students lined up outside the building, ambulances, helicopters and federal agents swarmed the school in Santa Fe, between Galveston and Houston.

Cameras in the school are expected to provide a lot of information, said officials. 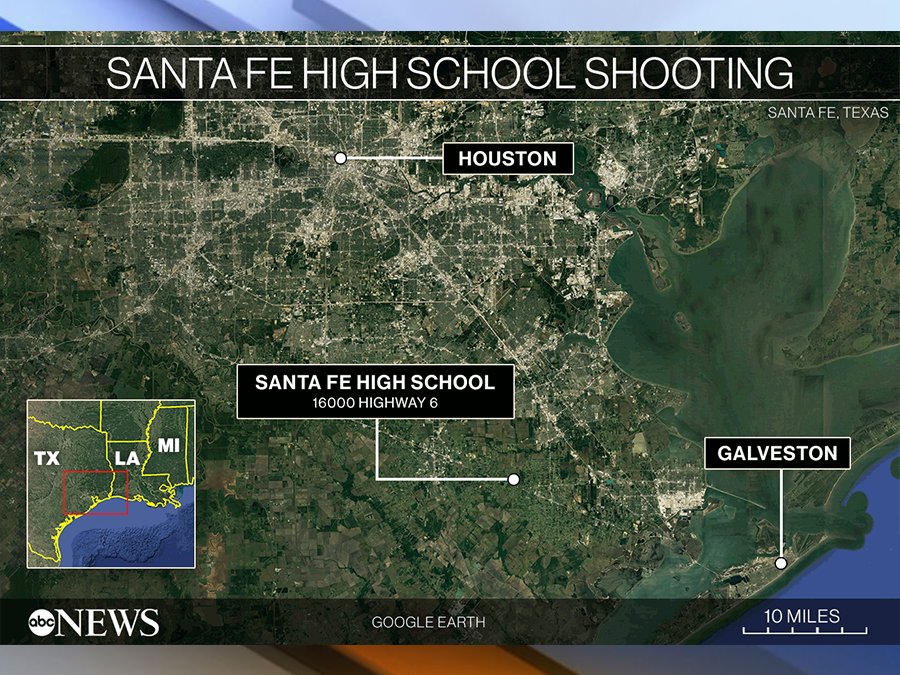 “It has been happening everywhere. I wasn’t surprised it happened here,” one student told KTRK. “I was just scared. I just kept running.”

The governor says the suspect said he originally intended to commit suicide but gave himself up and told authorities that he didn’t have the courage to take his own life.

Abbott said there are “one or two” other people of interest being interviewed about the shooting.

The University of Texas Medical Branch said it treated three patients with gunshot wounds; two adults and one minor.

Ambulances, helicopters and federal agents swarmed the school as students line up outside the building.

"I’m scared to even go back," said one student, crying. "It’s just not something that you should feel throughout the day, being scared. Especially somewhere where we say the Pledge of Allegiance."

School shootings have "been going on too long in our country," President Trump said today from the White House.

"Too many years, too many decades now, we grieve for the terrible loss of life and send our support and love to everyone affected by this absolutely horrific attack," he said.