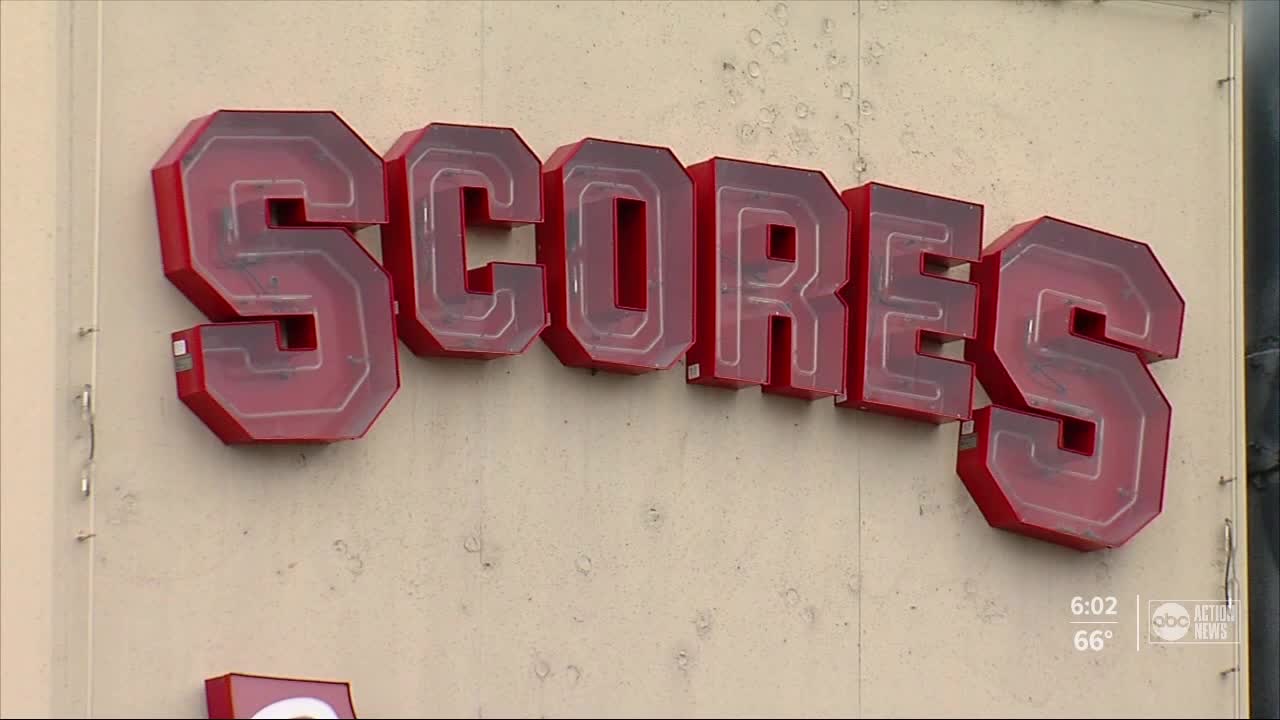 A lawsuit filed on Wednesday is accusing a Tampa strip club of exploiting a minor with disabilities and "steering her into illicit activity both within and beyond the club." 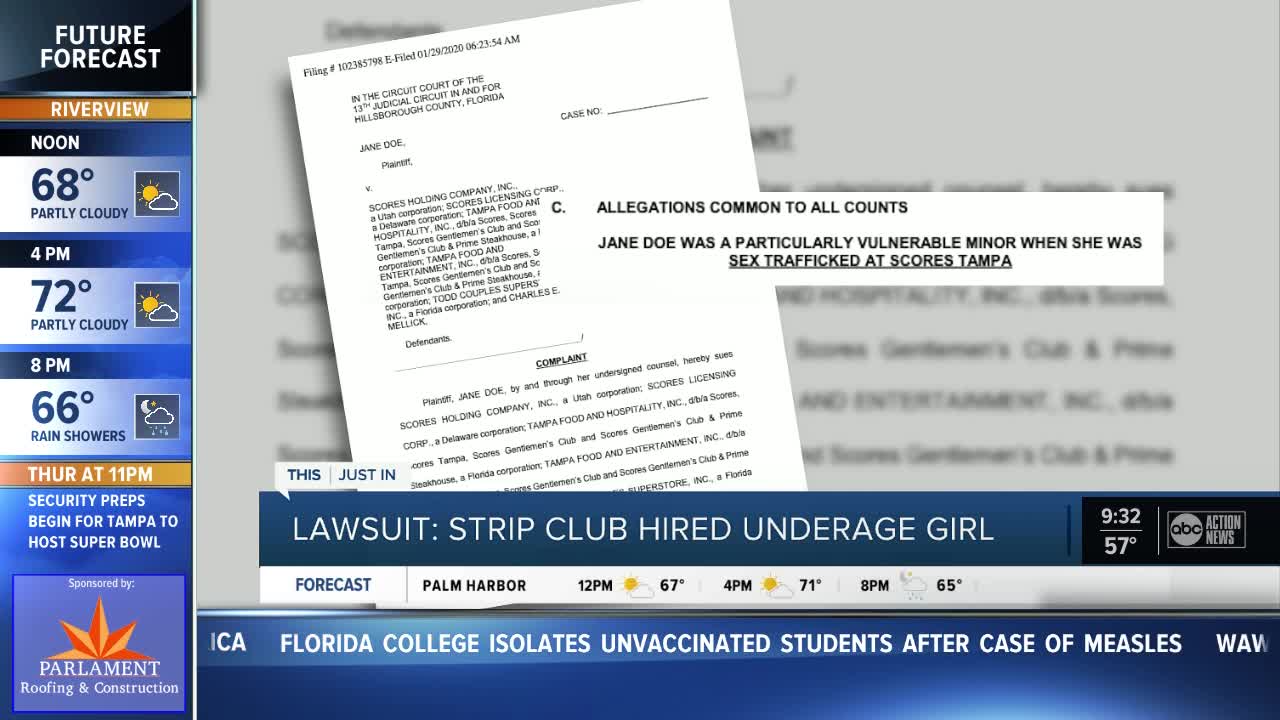 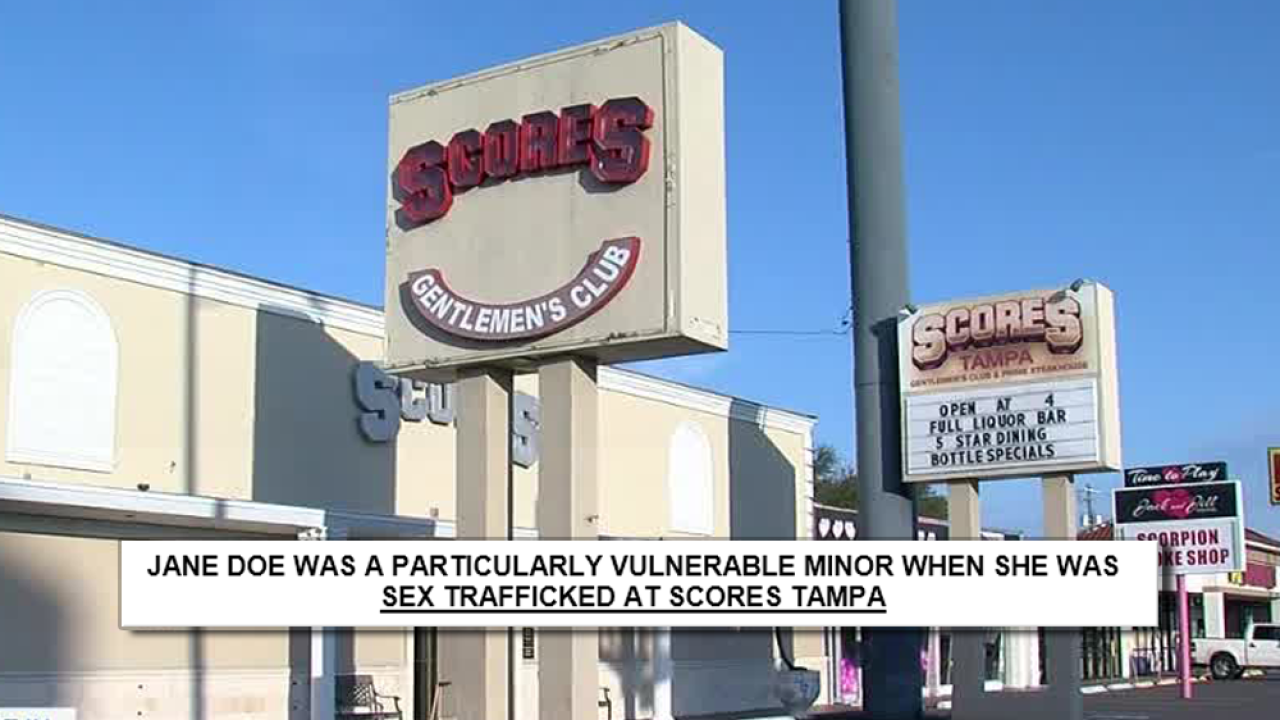 TAMPA, Fla. — A lawsuit filed Wednesday accuses a Tampa strip club of hiring and exploiting an underage girl with disabilities and allowing her to be groped and propositioned with sex acts by customers.

The victim, who is only named as Jane Doe, "was a particularly vulnerable minor when she was sex trafficked at Scores Tampa," the lawsuit states. Doe is described in the suit as a "developmentally disabled and severely emotionally disabled teenager," who functions at the mental capacity of a 13-year-old and required extensive medical and mental health care throughout her youth.

The lawsuit, filed in Hillsborough County, states the "reckless urgency" Scores used to hire the girl so quickly fit within the business model developed by the Scores chain.

Scores is a national chain with more than 10 locations in cities like New York, Chicago and Las Vegas.

The 50-page lawsuit accuses the club of hiring the teen and immediately having her on stage 30 minutes after she walked in the door and presented a fake ID. The suit states she was brought in on September 30, 2017 by 31-year-old Roberto Torres.

In the lawsuit, Torres is accused of getting the minor to run away from home, manipulating her to take part in commercial sexual performances that he could view and seeking to have a sexual relationship with her.

According to court records, Torres was arrested on a human trafficking charge in June 2018. He later pleaded guilty to the lesser charges of child neglect, interference with custody and unlawful use of two way communications and was placed on probation in November 2018.

According to the lawsuit, Doe worked at the club from September 30 through the following week of October.

During that time, the suit states Doe "was repeatedly touched, groped, molested and propositioned to engage in prostitution with explicit sex acts being proposed."

Before bringing the victim to Scores on September 30, 2017, the suit states Torres took her to several other adult entertainment clubs in the Tampa area, but all of those clubs refused to hire the teenager. The suit also states the fake license was rejected by the manager of a nearby hotel in the same week when it was used in an attempt to secure a cash deposit.

"The photograph, we believe the evidence is going to show, looked nothing like her -- so much so that a local hotel operator had rejected it that same week," said Dolce.

According to the lawsuit, it was obvious the driver's license didn't belong to Doe because:

The lawsuit accuses Scores of hiring Doe without verifying her age or identity, and without checking references or contacting prior employers -- all measures required by law to combat human trafficking.

Dolce said other dancers at the club introduced the teen to "everything from excessive alcohol consumption to hard liquor to use of drugs."

"This is almost a worst case scenerio of what happens to a minor who finds themselves under the influence of a trafficker," said Dolce.

Dolce, who is seeking a jury trial for the civil suit, said the victim has spent much of the last two years in a residential treatment facility and is still in counseling.

Luke Lirot, an attorney for Scores, said the business did nothing wrong.

The suit names a Scores employee named Charles Mellick, who is accused of preparing a standard performer agreement to hire Doe as a topless dancer. The agreement, according to the suit, was completed in the name of another woman whose driver's license Torres gave to Doe to present as her own. The suit states Mellick signed the form as having witnessed the "performer's" signature, but the performer signature line on the form was blank. In addition to the blank signature line, the form called for a second form of ID, which the suit says was never requested.

Lirot said Scores staff has undergone trafficking prevention training and told ABC Action News the strip club cooperated with police in the case after cops rescued the teen from Torres.

Lirot said he plans to file a motion to dismiss the case.

The lawsuit also accuses Todd Couples Superstore, located on the corner of N Nebraska Ave and E Fletcher Ave, of negligence after Torres brought the minor in prior to taking her to Scores. Torres shopped with the minor for lingerie, shoes and pasties although a sign outside said “You must be 18 or older to enter. Picture ID required if you look 30 or younger,” according to the lawsuit. The complaint says the store didn't request any ID from Doe.

The lawsuit alleges the following counts:

Read the full lawsuit below