Refurbished mattresses make up an estimated 10 percent of mattresses sold. They are an inexpensive alternative to high-priced mattresses, but what is really inside? The I-Team bought one and took it apart to find out.

TAMPA, Fla. — The ABC Action News I-Team is investigating the refurbished mattress industry, which experts believe may account for as much as 10 percent of all mattress sales.

These mattresses are made from parts of used mattresses, which are recovered, then sold in discount stores.

But are they really a big bargain?

We took our mattresses to Wholesale Mattress Warehouse in Tampa, which sells only new mattresses made by a fourth-generation Florida-based manufacturer.

"This is not a factory covering. I can tell because there are already holes in it," said store manager Lisa Morrison.

She says the plastic covering is much thinner than the ones that come on the mattresses she sell.

Morrison also noticed there were no labels on the refurbished mattresses.

"There should automatically be a label at the front of the back of your mattress," she said.

The tag should be white and declare it passes flammability tests and is made of all new materials.

Morrison said in recent months her store has heard from customers who were upset that they unknowingly bought refurbished mattresses from other stores.

In Florida, it's legal to sell refurbished mattresses, which have new covers and are supposed to be sanitized. The people who make them claim they are "sanitized," but ABC Action News has discovered that might not always be happening.

The I-Team has uncovered that manufacturers and retailers aren’t always letting consumers know what really may be inside. And since nobody regularly polices existing regulations, mattress refurbishing operations can fly under the radar.

The problem? New mattresses can sell for hundreds or thousands of dollars.

Not everyone can afford to pay that much for a mattress, so customers flock to stores where they can get a better deal.

Payless Furniture, a family owned and operated discount furniture store in Tampa, sells refurbished mattress sets for $109. Customers, many of whom spent months sleeping on air mattresses, buy them at a rate of dozens of sets a day.

“They said this is a good bed,” said Ozzie James, who bought a new bed from the store.

But he said it broke within weeks. He says a rusty spring poked through the mattress cover.

“I slept on that thing for at least two years, unfortunately, while it was broken,” he said.

“Everything gives you the sign that it was brand new,” said a customer we followed from the store, who didn’t want to be identified because she was embarrassed that the mattress she bought was all she could afford.

Payless picks up loads daily and gets deliveries from Quisqueya Mattress Company, located on Nebraska Avenue. The mattresses come out with new covers and in plastic bags.

But we wanted to see what was really inside, so we bought mattresses we saw made at the factory, then delivered to Payless. The mattresses are cobbled together piece-by-piece from parts of other used mattresses. New foam and some new batting is used in the process, but springs and other materials used in the manufacturing process come from old mattresses. 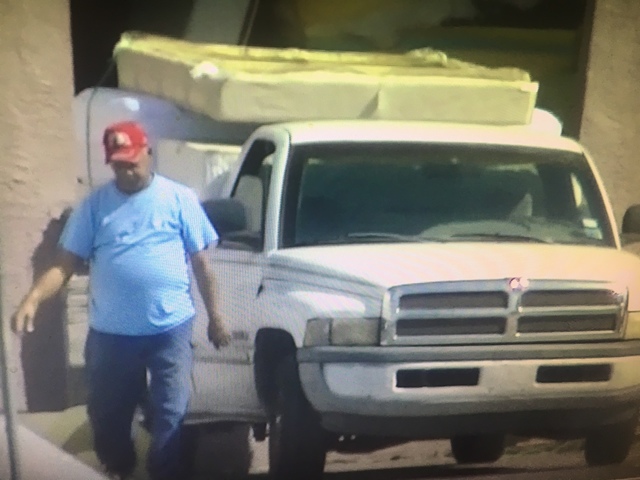 “We pick them up, the used mattresses, to refurbish,” said Tony Parades, who operates Quisqueya Mattress Company with his brother Francisco Paredes.

They say they have refurbished mattresses for more than 20 years and are among the best in the business. They buy most of the mattresses they refurbish from Sears, which hauls them away from customers who buy new mattresses, the company says.

The company also sells them mattresses that were damaged during shipment.

During multiple days of surveillance at a Tampa refurbishing plant, we observed the company buy dozens of used mattresses from just about anybody who pulled up to their loading dock.

When asked whether it bothered them that the sellers may have picked up the old mattresses from trash piles, Tony Paredes said,  “We don’t know. They’re just bringing them to us.”

We followed one of the sellers as he trolled apartment complexes looking for more mattresses.

Our camera was there as he pulled a box spring set out of a junk pile and threw it into his truck to sell. 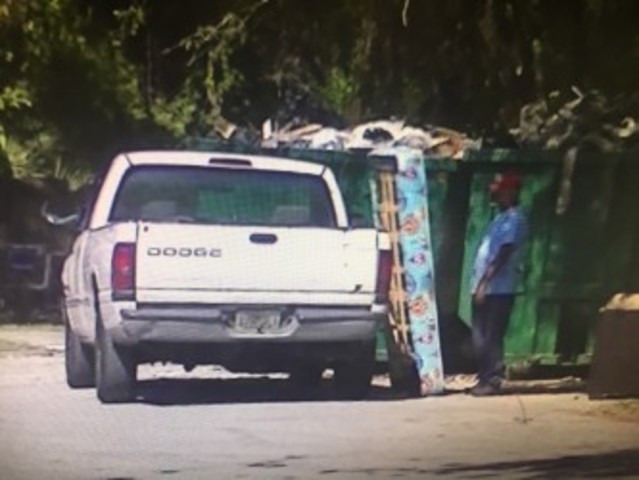 The factory owners say only they refurbish the cleanest mattresses and box springs, then re-sell the rest to other used mattress sellers.

“The company I sell it to, they sell it too, making more money,” said Franciso Paredes. “It’s a big chain.”

During the manufacturing process, workers stuff mattresses with used materials and squirt them with a blue liquid they say sanitize them.

“That takes care of the whatever. Bacteria and stuff like that,” Tony Paredes said.

We bought a refurbished mattress from a discount furniture store and asked forensic scientist Anna Cox to take it apart to see what was inside.

She used exam gloves, a microscope, a black light and a surgical scalpel in the process.

As it was removed, she discovered “not so new” parts of old mattresses.

“You can see visually, from just removing this, how dirty this mattress is,” Cox said.

Cox has been a crime scene investigator for 20 years and now trains others in evidence collection.

“These appear to be different mattresses that are just patched together and you really don't know the history,” she said.

The surfaces of old mattress covers, which are used as part of the batting for the refurbished mattresses, are filled with yellow stains.

“Could be sweat. Could be the excessive amount of skin cells,” Cox said.

She takes a photo of something shiny that looks like a bug.

“That looks like a hair,” she said, pointing out another piece of debris embedded in the old mattress cover.

Then she pulled out the black light, which she uses as a crime scene investigator to identify body fluids like urine, semen and sweat.

“Holy cow. That is super bright!” Cox exclaims as stains on the surface glow brightly.

“This would not live up to my expectation of something being sanitized,” Cox said.

We show the factory owners the pictures.

“We aren't the only ones that sell to Payless,” said Tony Paredes. “He has different kinds of companies.” 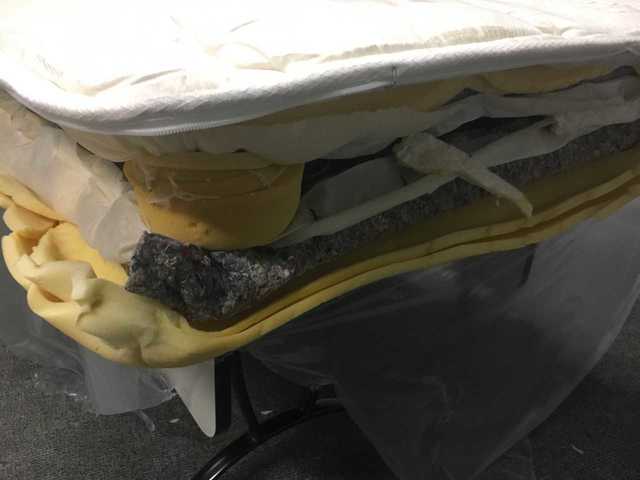 But it appears they aren’t currently following Florida’s law.

The Bedding Label Act says: “All bedding manufactured and sold in the state that contains any previously used materials must bear a conspicuous label notifying the consumer of that fact.”

“Right now, I don't have a tag on those,” Tony Paredes said, pointing to his mattresses.

He says his company ran out of tags and hasn’t yet received new ones from the vendor.

“The good thing is that we don't sell as new, we sell as refurbished,” Tony Paredes said, although it’s unclear how consumers are supposed to know what’s inside if they don’t have the required label.

Each offense is a misdemeanor, punishable by a $500 fine and 60 days in jail, but nobody's investigating.

The Florida Attorney General’s Office is the state mattress police.

Their Press Secretary says no action has been taken against the manufacturer or retailer because they haven’t received any complaints.

They say if you believe a used or renovated mattress is being sold “as new” or without the proper label, you can file a complaint with the Florida Attorney General at www.myfloridalegal.com [myfloridalegal.com] or by calling 1-866-966-7226.

“It's really wrong and it's also disgusting,” Ozzie James says of the refurbished mattress industry.