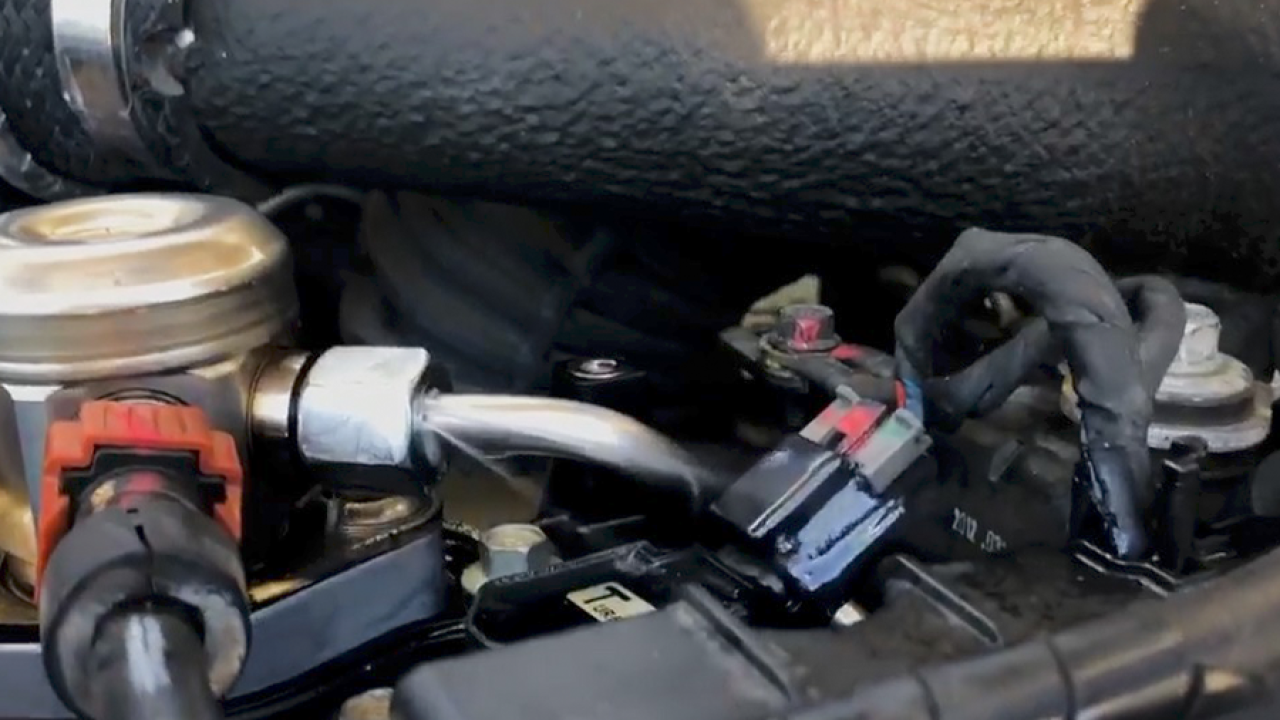 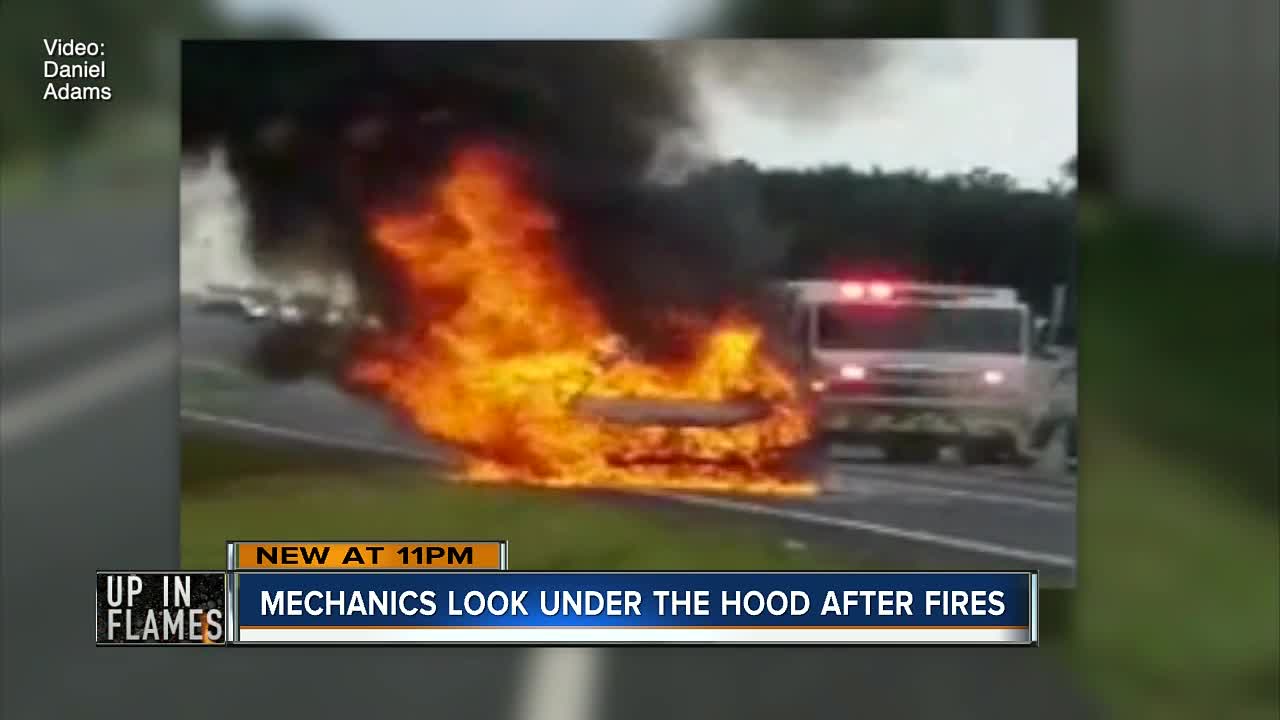 The work done during recent engine recall replacements may have sparked the fires in some of the hundreds of Kia and Hyundai vehicles spontaneously bursting into flames, auto experts tell ABC Action News.

Investigative Reporter Jackie Callaway spoke to mechanics and a fire investigator who said they believe a fuel pump leak could be to blame for some Kia fires, such as the one that torched Daniel Adams’ SUV.

UP IN FLAMES | Read more on our I-Team Investigation

This summer, Kia replaced the engine on Adams’ 2013 Kia Sorento as part of a recall on 1.2 million Kia and Hyundai engines for a detect unrelated to the fires.

But just weeks later, Adams, his wife Christina and their 13-month-old son barely made it out of their burning vehicle alive when it caught fire on a Polk County highway.

“It was engulfed in flames before I was even really was out of the car,” Adams told Investigative Reporter Jackie Callaway shortly after the August fire.

Now some experts tell the I-Team they think they know why.

Fire investigator Rich Meier said he suspects fuel pump leaks are igniting some of these fires.

“You have the fuel and you have an ignition source and under the right conditions the car can catch on fire,” said Meier.

Meier examined videos shared with ABC Action News by two separate Kia owners – one in North Carolina and the other in Louisiana – that show spewing fuel pumps just weeks after their engines were replaced.

Kia even warned about fuel pump leaks way back in August 2011 – telling mechanics in a special bulletin that fuel pump replacements done without new bolts and tubing “may result in fuel leaks.”

As part of the current recall, Kia mechanics need to temporarily remove the fuel pump to replace the engine.

Sam Pertuit of Louisiana said he took video of fuel spraying onto the ignition coil in his 2014 Kia Optima a few weeks after Kia replaced his engine as part of the recall.

“This is what I had to put my family in,” said Pertuit, who now says he’s too afraid to let his wife and four kids ride in his since repaired vehicle.

Jerry Tucker of North Carolina also said he discovered his 2014 Kia Sorento spewing gas from the fuel pump after Kia replaced his engine.

The I-Team showed videos of both leaks to Bob Noriega, a Tampa certified Kia and Hyundai mechanic.

“That’s extremely alarming,” said Noriega, who estimated the leaking fuel was hitting parts of the engine that had already heated to temperatures up to 1,200 degrees Fahrenheit. “Anytime there is a fuel leak, it is extremely concerning.”

Since 2011, drivers have reported 240 Kia and Hyundai vehicles – which have similar engines – spontaneously catching fire.

If Jerry Tucker and Sam Pertuit hadn’t found those leaks, auto experts say their cars could have also gone up in flames.

But not every Kia fire involved a vehicle that underwent the engine recall.

“It is quite possible there is more than one cause to these fires,” said Meier.

The U.S. Senate Commerce Committee called for hearings after reports of hundreds of Kia and Hyundai vehicles spontaneously bursting into flames. But that hearing – scheduled for Nov. 14 – was canceled after the CEOs for the auto giants refused to attend and explain what’s causing these fires.

Meanwhile, Hyundai now says most of its vehicle fires involve cars which haven’t undergone the recall yet, such as the 2012 Hyundai Sonata which caught fire on a major interstate just south of Chicago in 2016.

A Hyundai spokesman told ABC Action News in an email that “in the majority of cases the fire is caused by the manufacturing issue identified in the recall. That’s why we are working diligently to get the recalls completed for all drivers of these vehicles.”

A Kia spokesman said the company couldn’t comment on the exact cause of the leaks – or the fire – without examining the cars.

The company released the following statement:

No one is more committed to ensuring our customers’ safety than we are. Without examining the engine in question, Kia cannot determine what caused the leak in this situation and encourage WFTS to provide the customer’s contact information or for the customer to contact Kia directly to quickly investigate this matter.

All automobiles contain combustible materials and a vehicle fire may be the result of any number of complex factors, including a manufacturing issue, inadequate maintenance, the installation of aftermarket parts, an improper repair, arson, or some other non-vehicle source, and must be carefully evaluated by a qualified and trained investigator or technician. KMA has added additional resources to ensure that each reported vehicle fire can be investigated as quickly as possible and appropriate action taken.

The vehicles referenced in media reports correspond mostly to the more than 614,000 2011-2014 model year Optima, 2012-2014 model year Sorento and 2011-2013 model year Sportage vehicles with the 2.0L T-GDI and 2.4L GDI Theta II engines included in Kia’s engine recall (SC147) to address a manufacturing issue that could lead to engine failure and, in rare circumstances, an engine fire. This is why KMA is initiating additional efforts to ensure that all customers complete the recall as soon as possible. If a recall is unable to be remedied immediately, KMA will provide alternate transportation at no cost to the customer until their vehicle is repaired or another satisfactory resolution is determined.