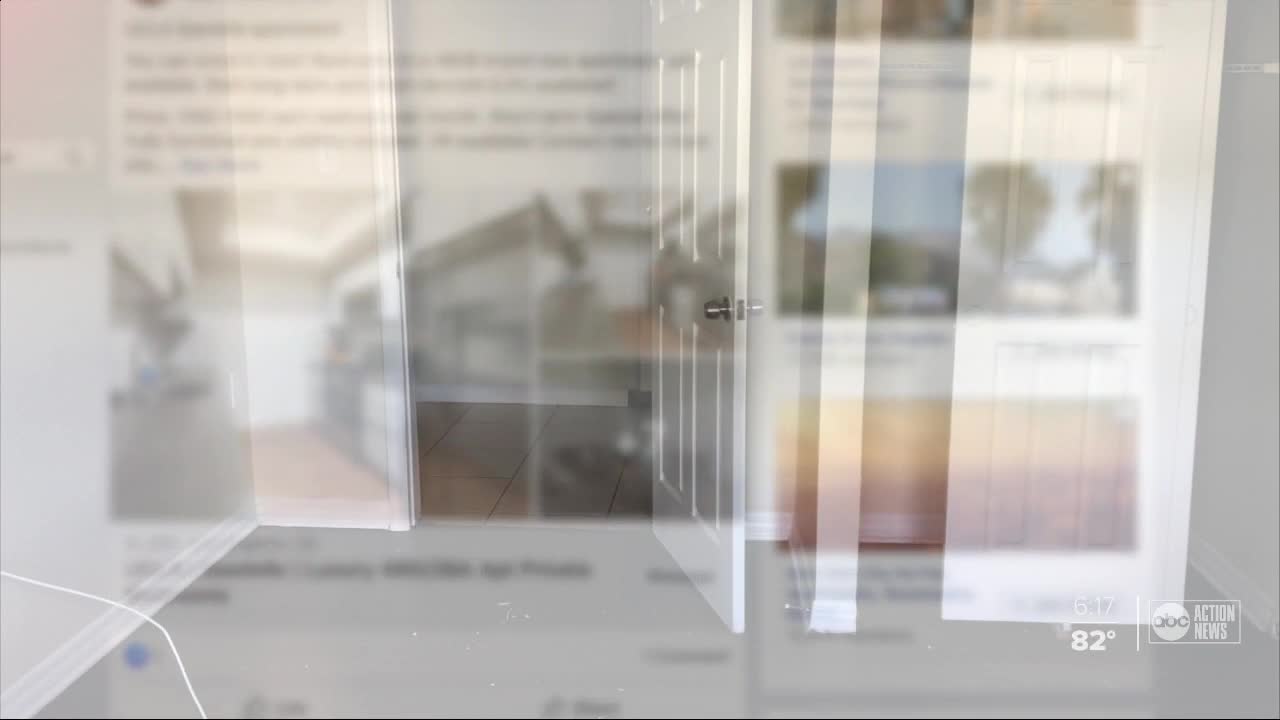 The I-Team is looking into reports of fake housing deals popping up online.

TAMPA, Fla. — Renters are being taken advantage of during the coronavirus pandemic.

I-Team investigator Adam Walser uncovered how people offering housing they don't own or have the right to rent out are taking money from unsuspecting tenants.

Ashley Reid, 20, of Tampa, got a big break when a modeling agency called her in March, offering her work in Los Angeles.

She says she started looking for an apartment on Facebook.

"I joined this Facebook group to see if I could find places because my friends recommended doing that," said Reid. "I put out that I was looking for a place, and I had like 20 people respond."

A man who said he was a rental agent sent her photos of an L.A. apartment for rent at about half the market rate.

Reid signed what she thought was a lease and used an app to send $1,550.

But then things changed.

"A couple of weeks went by, the coronavirus stuff started happening, so my agency said I couldn't come down anymore," she said.

Reid contacted the agent on Facebook messenger, and instead of agreeing to delay the rental, he demanded more money.

"He was like, 'Oh, people are wanting to book this place before you.' Which seemed weird because a lot of people aren't moving because of coronavirus and everything," said Reid.

Then Reid tried to get her deposit back.

"He said I would get the refund, which was like a day, then the next day he said, Ok, I should be sending soon," Reid said. "So I was in the car driving with my friend and all the sudden I get a message from him, and he says 'poverty caused this for me. I'm so sorry Ashley.' And then he like completely blocked me on Facebook and everything."

But we learned the man who took Reid's deposit had no authority to rent her that apartment.

We tracked down the building where Reid was promised an apartment and called the leasing agent. They told us there has only been one apartment available there within the past six months. He says he never signed a lease with anyone by the name of Ashley Reid or heard of the man who took Reid's deposit.

Next, we looked at the link to the company website the man sent Reid – Our Homes U.S.

We uncovered the business address at the bottom of the page is an upscale residential apartment building in New York City — a part of Manhattan nicknamed "billionaire's row" — and home to many celebrities.

The building's management company told us it is in no way associated with Our Home U.S.

Then there's a photo in the "about" section of the website.

We found the same exact photo posted on the website for the Turkish Coalition of America. The coalition says the photo was taken during a 2015 business forum and had no idea the site was using it. The coalition said the picture was taken at the U.S. Capitol and included three members of Congress.

We tried calling the business numbers listed on the website and left messages. One was an untraceable Google voice phone number.

But when we didn't hear back, we reached out directly to the man who took Reid's deposit on Facebook.

First, he messaged that his phone was bad. He later agreed to a recorded conversation, but after a few seconds, he hung up and blocked us from his profile.

FBI Supervisory Special Agent Keith Givens, who is over white-collar crime investigations in Central Florida, says he can't speak to specific cases, but in general, reports of renters losing money to fake housing deals are on the rise.

"We do see that the overseas people do favor using Facebook and other social media where they can set up a persona to try to rob people during this COVID time," Givens said.

He believes they use Facebook to meet potential victims because it's relatively easy to do.

"They don't have to have a date of birth, a Social Security number that's verified. Basically, they create a persona where there's almost no verification behind it," Givens said.

Tammy Sorrento is a licensed private investigator from Jacksonville. She spends her free time trolling Facebook rental groups and reporting profiles she suspects are advertising apartments they don't own or have the right to rent.

"They're actually using the virus to their benefit because now they have an excuse to say, 'I can't show you the property because of the virus.' And that is just infuriating to me," Sorrento said.

Sorrento says she's tried to warn Facebook multiple times about profiles – including in a message she sent Facebook on March 3 about the man who took Reid's money.

"I am doing everything I can to try to shut them down. I don't even stop reporting them to Facebook, because I hope that maybe on the 50th time that I report them, maybe, they'll get removed," she said.

Sorrento shared with us the response she received from Facebook.

"We reviewed the profile you reported, and it doesn't go against any of our community standards," was the reply.

We reached out to Facebook multiple times to find out what the social media company is doing about this problem, and we have yet to hear back.

Reid says she's speaking out in the hopes that others will learn from her mistake.

"At least talk to them on the phone, and just make sure everything's real. If you're not seeing them on video chat or in person, you need to be very careful or don't do it," Reid said.

If you have a story you'd like the I-Team to investigate, email us at adam@abcactionnews.com.