PORT RICHEY, Fla. — Drugs, guns and dozens of calls to 9-1-1... the type of scenario you might expect from a public nuisance, not a local official.

But the ABC Action News I-Team discovered they involve incidents at a local mayor's home.

“It's kind of early in the day for this,” said the police dispatcher, sending an officer out to Mayor Dale Massad’s house on a call in August of 2015.

The call, which came in shortly after 9 a.m. was from one of the mayor’s then-girlfriends, Jodie Cunningham.

“We have people in our house and outside our house,” said Cunningham.

When the officer arrived, she said multiple homeless people were living under a tree and hiding under boats.

“They were all over last night,” she told the dispatcher.

When officers arrived, they say Massad, who had bloodshot eyes, told police he had been "partying all night," as he stood on a stool with a flashlight and a loaded gun.

The officer asked him to unload his gun and he complied.

“That's way embellished, I can tell you,” Massad said recently when asked about the incident.

He did voluntarily tell us he fired a gun inside his house. “I shot one of my smoke detectors because I couldn't get up there to get it and it wouldn't go off and it was 3 a.m.,” Massad said.

We requested and received hundreds of pages of reports involving at least four dozen officer visits to the mayor’s house in three years. 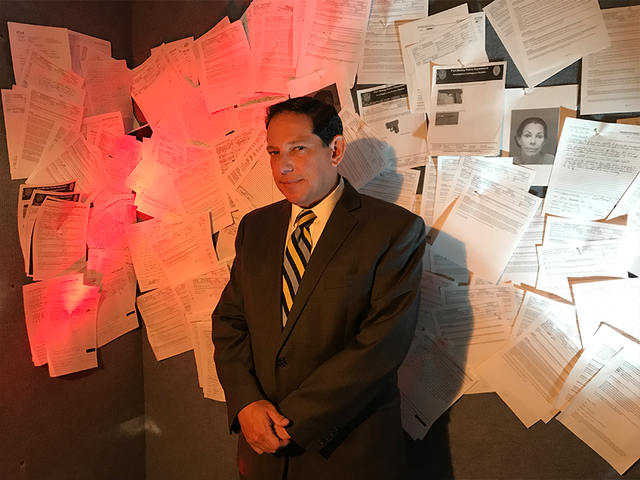 Records indicate Massad has never been arrested by Port Richey Police, but other people living at his home have.

“Last night, his girlfriend beat me to where I’ve got a black eye,” Cunningham said in a 2016 call, alleging she was battered by Caj Joseph, a convicted prostitute who also lived at his address.

“He's like, call the police. They won't do anything to me. I'm the mayor,” Cunningham said.

Police spent several hours at the residence but did not find evidence to arrest anyone.

In most cases, Massad was listed as the victim.

We reached out to both Joseph and Cunningham but did not hear back from them.

She was trying to find out who stole three guns from the mayor’s house.

“This is not ‘he's the mayor.' This is not who I know… these are three possible stolen guns that are on the streets,” she tells the witness during the interview.

“He has guns all over the house,” said one witness interviewed in the case.

“There's just too much bull s...t that goes on at his house,” said another witness.

“Chaos, fighting all the time. It's just pure chaos,” he describes the mayor’s house.

The police department distributed officer safety bulletins about the guns.

Massad later reported he found the guns and 3/4 of an ounce of marijuana in a desk drawer where he kept one of the guns.

Before police returned to his home, the bag of pot had disappeared.

“I left it there for them, when they came it was gone. That was planted,” Massad said.

He says he doesn’t personally smoke marijuana but says he is registered through Florida’s compassionate use program to receive medical marijuana.

“He's a bit of a rogue in some areas, but I believe the guy gets things done,” Coyle said.

He points to new businesses coming to town, improvements in city parks and a long-awaited dredging program he says Massad is finally making a priority.

“If you do your job, whatever you do on the side, that's fine by me,” Coyle said.

“That's sad that our mayor has that going on,” said Kimberly Billeta.

“You're not leading by any sort of example. You're wasting resources and that's gonna take away from everyone else,” said Josh Caravona.

The mayor says he's learned a lesson about calling the police.

“If somebody has a sword at your throat, do not call 9-1-1,” he said. “Because I’m the mayor and it comes to you or whoever. The whistle blowers. It’s ridiculous."