Gov. DeSantis: 'There doesn't seem to be anybody held accountable,' describing guardianship oversight 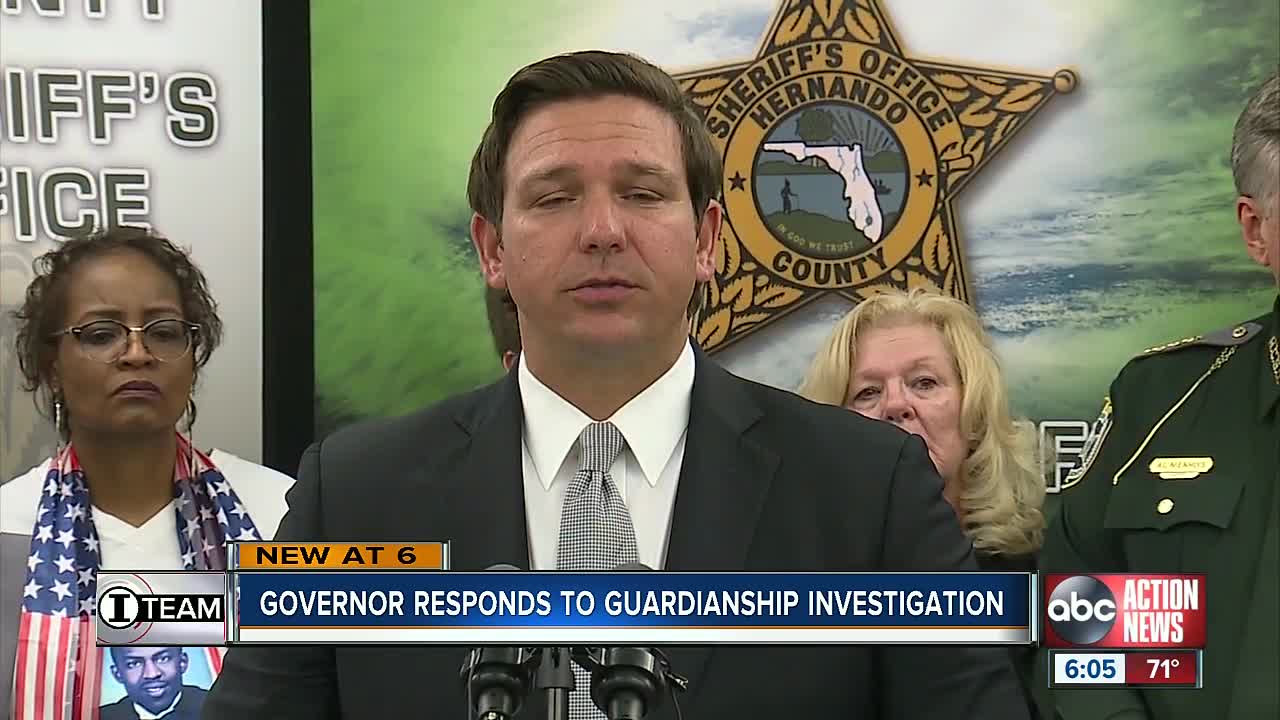 Florida Gov. Ron DeSantis says "There doesn't seem to be anybody held accountable," in reaction to ABC Action News I-Team investigation, which revealed not a single guardian's registration has been revoked in three years, despite many verified complaints. Governor calls it "unacceptable".

THE PRICE OF PROTECTION

DeSantis oversaw interrogations of terrorism suspects in the Middle East and at Guantanamo Bay Naval Base when he was a military attorney.

Part of his job was making sure everyone played by the rules.

Now, the governor says he intends to hold professional guardians to a similar standard and take action against those who exploit seniors.

“Our seniors, unfortunately, are targets of fraud in a variety of contexts,” DeSantis said. “What troubled me about some of the issues you guys raised was obviously bad things are happening, but there doesn't seem to be anybody held accountable."

Last week, the I-Team reported the state watchdog set up by legislators in 2016 has handed out only 19 warning letters.

They cited guardians for taking property, depositing checks made out to people in their care into personal accounts and failing to disclose past criminal histories.

Despite those serious violations, that state watchdog — the Office of Public and Professional Guardians — has never revoked a guardian's registration.

Among the issues reported to the office was a case involving a local realtor who asked a court to put an elderly beach hotel owner she barely knows into guardianship.

She stated in court documents that she felt the senior citizen was being exploited because she sold part of her property to a relative at too low of a price.

In another case, a court-appointed guardian took the wedding ring off an 85-year-old widow's finger.

Alice Yaniscavitch said the thing she feared the most was going to a nursing home, and she planned ahead of time to avoid it.

But under guardianship, she ended up being moved into a home anyway, as her daughter questioned a trust authored and notarized by an attorney.

It's unclear how many of Florida's 550 registered guardians are under investigation by the state's watchdog, but the agency says it has 132 open investigations into alleged wrongdoing.

“I think that you've had over a hundred and thirty some cases and nothing has happened to anybody. That just doesn't strike me as being acceptable,” Gov. DeSantis said.

That's a concern shared by Pinellas County Circuit Judge Linda Allan, who presided over thousands of guardianship cases during six years as a probate court judge.

“I would like to see some type of higher level of governmental oversight,” Allan said.

Governor DeSantis says he plans to provide just that.

“Whether there needs to be new legal authorities, we're looking at that, but at the end of the day, we want to be on the side of Florida seniors,” he said.