Felony murder rule: Life in prison for a crime someone else commits in Florida

'No small role' when felony results in murder

While some argue the felony murder rule is about public safety, others say — this isn’t justice.

Amid a growing debate over punishment fitting the crime, and a push for those punished to get a second shot at freedom, the I-Team sat down with a man sentenced to life without parole for a murder someone else committed.

‘I’m in prison because I loaned my keys’

Ryan Holle has spent nearly half of his life behind bars.

“I just passed 19 years incarcerated,” Holle told I-Team Investigator Kylie McGivern, sitting on a plastic chair in a largely empty room at Marion Correctional Institution, his inmate number, hanging from an ID on his uniform.

At 20 years old, Holle made a decision that forever changed his life.

“I’m in prison because I loaned my keys to my roommate,” Holle said.

It was 2003. The morning after a party at his home in Pensacola, his roommate, William Allen, Jr. asked him, “'Can I borrow the keys to your car?' And I said, ‘sure.' You know, no problem," Holle recounted. "And in the process of that, him and the other individuals that were involved in the crime were talking about going to rob Jessica Snyder’s house, who was the victim in the case.”

They also talked about going to get food.

Holle went back to sleep. He said when he woke up and his car wasn’t back, he called his roommate, who said they were about to break into Snyder’s home.

“They were just saying they were going to go rob her mom for a safe that was in her house, that supposedly had drugs and money inside of it,” Holle said.

They took the safe and Miller beat 18-year-old Snyder to death with a shotgun. Then the four men drove back to Holle’s home.

“The officers came to the house and basically put everybody in handcuffs,” Holle said. “I wanted to tell them everything that happened during that time period. Because I didn’t feel like I had done anything wrong.”

But under Florida’s felony murder rule, Holle was just as responsible for Snyder's death as the man who killed her.

Holle had no criminal record.

“The offer of a plea deal came out during that time period, and I was told not to take it because I wasn’t guilty,” Holle said.

During the trial, Holle recalled his attorney saying something that continues to haunt him. The attorney, Holle said, "told my family to actually bring clothes and leave it in the vehicle because there was no way that I’d be convicted."

Holle, like Allen, Williams, Thomas and Miller, was sentenced to life without parole.

“If I could go back and stop that — I would stop it. I can’t,” Holle said of the murder. “But you can learn from the past.”

The state’s key argument was that the murder would not have happened without Holle.

“'No car, no crime.' That was what the state attorney said,” Holle told the I-Team.

It’s an argument the victim’s family agrees with.

The Snyder family, including Jessica’s father, mother and younger sister, spoke to the Executive Clemency Board at its December 2014 meeting in Tallahassee. They said Holle should spend the rest of his life in prison.

“There is no small role that you can play if it results in someone’s death,” State Attorney for the 12th Judicial Circuit Ed Brodsky said.

“If the type of offense that you’re committing is foreseeable, that someone could be killed during the commission of that offense — you will be responsible for that death,” Brodsky said. “Even though you may not have planned it and discussed it.”

When asked if it is fair that all people involved have the same sentence, life without parole, even if someone did not kill a person, Brodsky replied, “Yes. Absolutely.”

The state attorney told the I-Team the felony murder rule is about keeping communities safe. 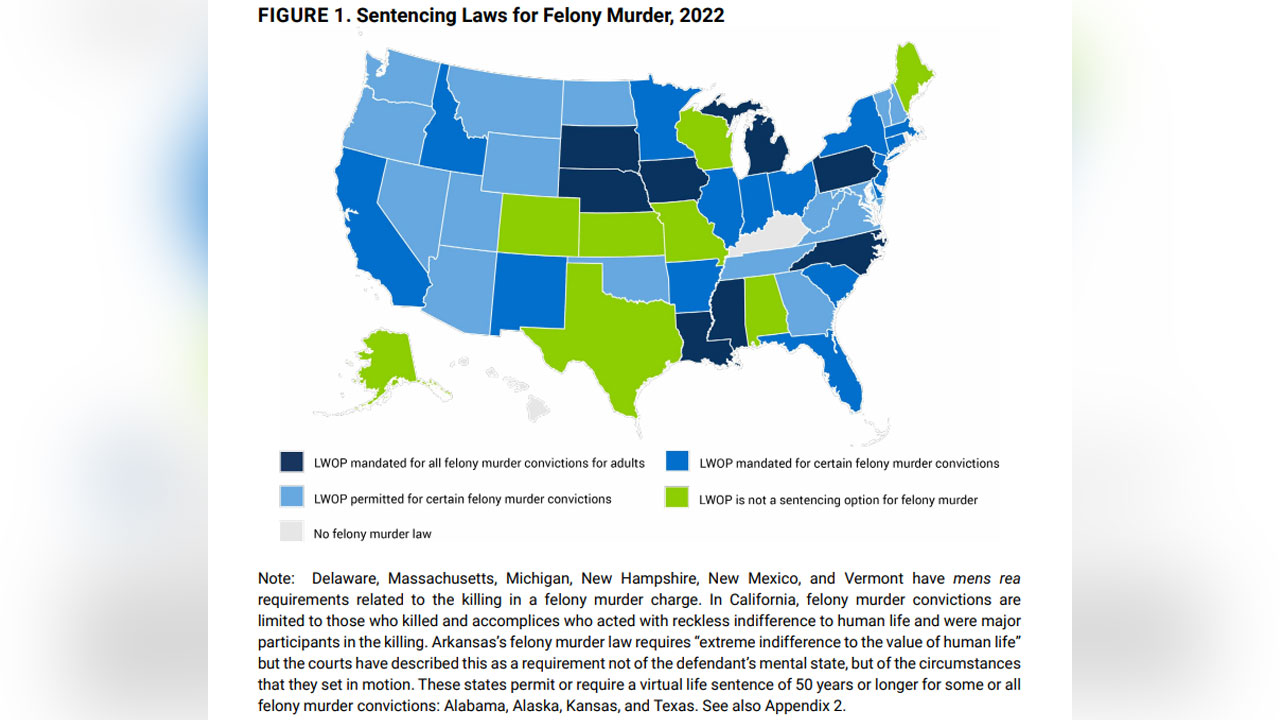 → Read the full report at the end of this story ←

In March, the nonprofit “The Sentencing Project” and “Fair and Just Prosecution” released a report called, “FELONY MURDER: An On-Ramp for Extreme Sentencing.” One of the key findings — “Felony murder laws have particularly adverse impacts on people of color, young people, and women.”

A map shows that in Kentucky and Hawaii — there is no felony murder law.

When concerns come up about a punishment fitting the crime, one option is to try to get a case before the Executive Clemency Board, which includes the Governor.

In June 2015, Holle’s family made that happen under then-Governor Rick Scott, who reduced Holle's life sentence without parole to 25 years followed by 10 years probation.

“Before I make a motion, I’d like to say a few words about this case. Ryan Holle deserves punishment for the gruesome murder of Jessica Snyder. When you help others to commit a burglary, you bare the risk a burglary could result in someone getting hurt or killed. Even though Ryan Holle might not have intended for Jessica to get hurt, he should have known that it was possible when he lent his car to a friend or other unknown persons so they could burglarize her home. For this reason, Ryan bears responsibility for Jessica’s tragic death. But I do not believe that this is the end of the matter. For lending his car, Ryan Holle is serving a life sentence. This is the same sentence given to Charles Miller, the man who viciously beat Jessica to death.I believe the purpose of commutations is to undo such obviously inequitable results. The court was required by law to give Holle the same sentence as the man who actually killed Jessica. But unlike the court, this board is permitted to take other factors into account. Because of Ryan Holle’s responsibility for Jessica’s death is clearly less than Miller’s, I believe his sentence should likewise be less. During the clemency board meeting last December, it was suggested that Ryan Holle refused to help authorities to solve this murder. But the record shows that Holle fully cooperated with police, and told them what he knew, and who else was involved in Jessica’s murder. He rejected the prosecution’s plea bargain, offering him the wrong impression that he shouldn’t serve 10 years in prison because right or wrong, he did not believe he participated in the crime. He did not reject it because he was unwilling to help authorities. It was also suggested Ryan Holle showed no remorse for Jessica’s death. In fact, he acknowledges his responsibility and has expressed remorse for the tragic consequences of his actions. I believe Ryan Holle’s case is the reason why we have the authority to commute sentences. All three of the men who broke into Jessica’s home are serving life sentences for Jessica’s murder. While my sentiments remain firmly with the families of murder victims, clemency is an opportunity to temper justice with mercy. For these reasons, I believe that a commutation is appropriate. I move to commute Ryan Holle’s life sentence to 25 years imprisonment followed by 10 years probation.”

“I honestly cried like a 2-year-old. Because my future and what I saw, even though you have the mindset that you think, I’ll never end up in here, you’re reminded of it every day because you do have older individuals that are in prison that are spending their whole lives in here,” Holle told the I-Team.

“I’m doing college because I want to excel and be better every day. I don’t want to be a part of the statistic of people that come back to prison. I don’t. I refuse. I will not come back to prison," he said. "And thankfully, because of Governor Scott, a couple years ago, it changed the course of my life.”

Holle is scheduled for release in two years.

The Department of Corrections tells the I-Team it has about 10,000 inmates serving life sentences with no parole. It is unclear how many of those inmates were sentenced under the felony murder rule.

“Of course, any murder is a heinous crime. And there’s a loss of life. But at the same time, you can’t just sit there and say all these individuals should be — every single person — should be charged just as if you committed the murder. I don’t believe that,” Holle said. “It needs to change. It definitely needs to change.”

‘The punishment should fit the crime’

The advocacy group “We H.E.A.R.T. Florida” is pushing for change through “The Ryan Holle Reform Act”.

But supporters, like Amanda Thiedt and We H.E.A.R.T. Florida founder Lisa Antonini, are hopeful they’ll find lawmakers to sponsor the new bill.

“The punishment should fit the crime,” Antonini said.

Her son Brian had just turned 18 and was still in high school when he and his friend, Mitchell Weiner, went to buy marijuana in Seminole County.

The dealers planned to rob the high schoolers. One of them killed Weiner.

“He was shot in the head,” Antonini said. “The gun was turned on my son because he had just witnessed what happened. They told him that if he said anything they would kill his mother and his brother.”

Antonini told the I-Team that prosecutors argued her son knew his friend was going to be robbed.

She said that’s not true, and recounted the conversation: “He told me that. ‘Mom, I didn’t know. I didn’t know what they had planned.’”

Under the felony murder rule, Brian was sentenced to life.

“He didn’t kill anyone," she said. "You know, the fact that I kept going back to in my mind was — he didn’t hurt anyone. How is this murder?”

Brian was granted an appeal.

“When the attorney called me with the news, he said, 'understand, less than two percent of murder cases get overturned on appeals,'” Antonini said.

Her son was ultimately offered a plea deal of 22 years in prison followed by eight years probation.

Brian is scheduled for release in six years.

Thiedt’s son, Zachary, doesn’t know if he’ll ever get out.

He was arrested soon after he turned 21.

“He was invited to go along with a couple of other young men to buy drugs,” Thiedt said. “He handed them his money and he waited like a block and a half away. He didn’t know that they had a gun with them. He didn’t know that they actually attended a robbery. But as it happened, unfortunately, the dealer was shot and killed. Because my son was with them that night, before and after, he was charged under the felony murder rule.”

Prosecutors argued that he was “actively participating” and contended that, “it doesn’t matter who pulled the trigger. All three of them are guilty.”

And all three, including Thiedt’s son, were sentenced to life without parole.

If you have something you’d like the I-Team to investigate, email kylie.mcgivern@wfts.com or call 1-866-428-NEWS.

Copyright 2022 Scripps Media, Inc. All rights reserved. This material may not be published, broadcast, rewritten, or redistributed.