What's next for the Florida panther: From COVID-19 to new toll roads and beyond 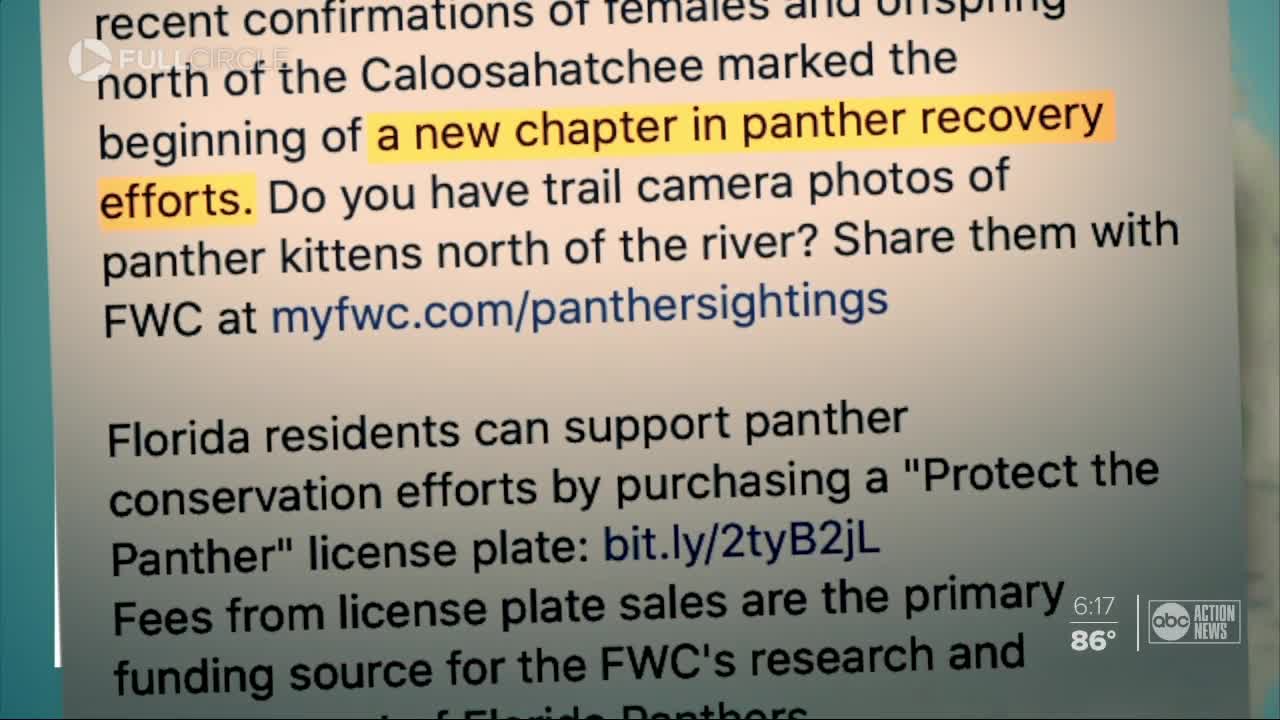 Vehicle deaths are the number one killer for the Florida panther. But, from March 3 through April 30, not a single panther fatality was recorded on a Florida road. 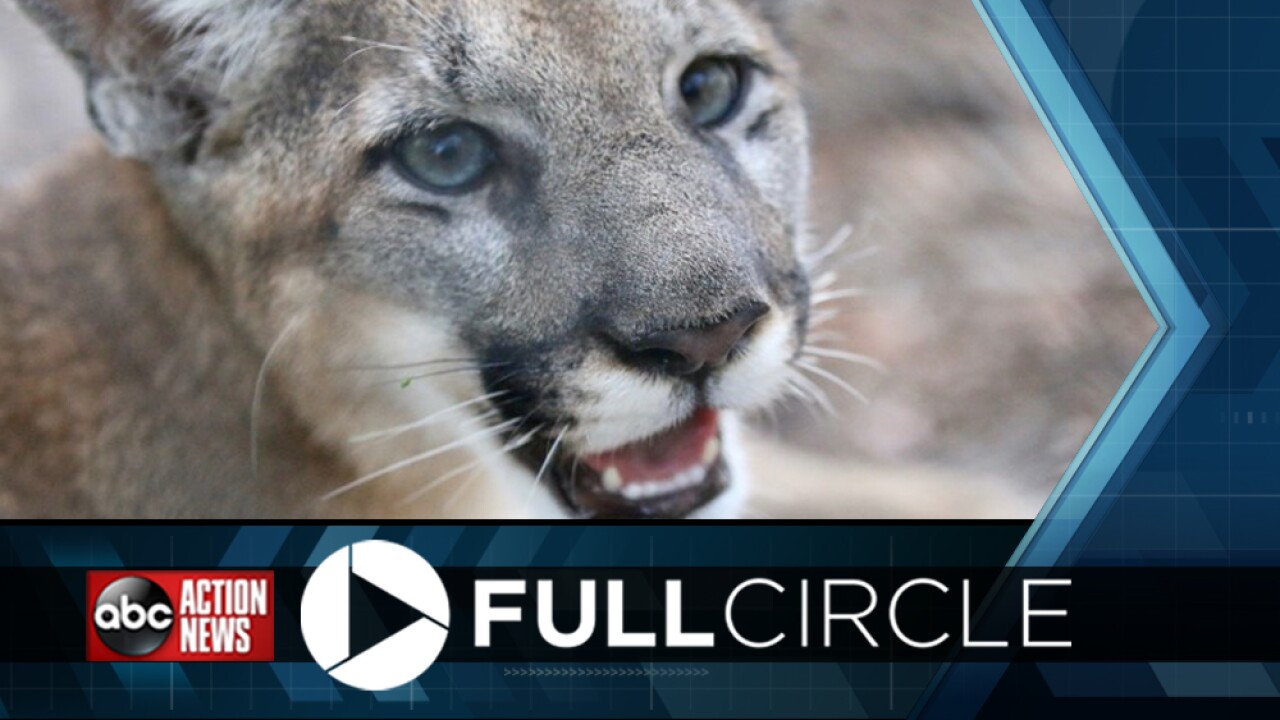 TAMPA — Vehicle deaths are the number one killer for the Florida panther. But, from March 3 through April 30, not a single panther fatality was recorded on a Florida road.

The data is continuously updated by the Florida Fish and Wildlife Conservation Commission under the section titled Panther Pulse, tracking new litters, fatalities, and depredations.

According to the numbers, the last panther killed on a Florida road, pre-COVID-19, was March 2. That started a nearly two-month stretch where the panther population remained stable as people followed stay-at-home orders. Researchers say it is unclear what the long term impacts could be on the panther population. But, at least in the short term, as one biologist said, it is pretty much common sense that fewer cars on the road will add up to less roadkill, COVID or not.

There are an estimated 120-230 panthers left in the wild. But, each year, dozens are killed crossing the street. From 2014 through June of this year, 173 panthers died on Florida roads. Compare that to 109 new kittens, and it is apparent deaths are far outweighing new births at an alarming rate. In 2016 alone, 34 panthers were killed on Florida roads. Then in 2018, only nine new litters were recorded.

According to information from the FWC, "affected animals exhibit varying degrees of rear leg weaknesses that lead to difficulty in walking."

That is where the future of the species and a proposed toll road come into clear view. The study area for the M-CORES Southwest-Central Florida Connector toll road will go through the heart of panther country. It is stretching an estimated 140 miles from Collier County north into Polk County towards Interstate 4. The exact route is unknown, and public hearings are still taking place.

The question environmentalists and animal rights advocates want answered: What will the impact of the roads be on the Florida panther?

We asked Florida Senator Bill Galvano, who spearheaded the legislation the risk to panthers could be?

"Environmentalists are worried," ABC Action News reporter Michael Paluska said to Galvano via a Skype interview. "They've said they think that toll road is more important than the life of a panther. That 140-mile stretch might wipe out the Florida population of our state animal."

"I think that's overstated rhetoric. I will again tell you that at the heart of this legislation is that we design and build with the understanding that our environment and natural resources are paramount," Galvano said.

Galvano said the best way to protect Florida wildlife and handle the millions of people moving to our state and tourists, is to plan and prepare for that influx.

"Our state is growing at a rate it never has. I mean, we have over 900 people a day coming here to the state of Florida, not to mention I believe 127 million people visited here," Galvano said. "The way we have developed in the state has put all the density around the coastlines, what I call a perimeter of prosperity."

Galvano said the toll road would ease congestion, help during hurricane evacuations, and build up the infrastructure for water, sewer, electric, and broadband.

"That's gonna be more roadkill," Ricky Pires, Director of the Wings of Hope program at Florida Gulf Coast University, said. "It really just breaks my heart. It really does."

Pires has fought for more than two decades to protect Florida wildlife. Each year she takes thousands of elementary school-age students into the wild and teaching them why it is vital to protect it. In February a group of students taking part in the Panther Posse program visited. Their mission statement is "never saying goodbye to the Florida panther and its habitat."

We joined Pires in February for an outing at the CREW Wildlife and Environmental Area in Immokalee. Dozens of 4th and 5th graders did scavenger hunts to learn about native plants and animals.

"I learned that it's important to keep your habitats secured and not ruin them because when you ruin them, they don't have habitats. They get extinct," Natalia Cortes, another 5th grader at Osceola Elementary, said.

Pires said one day her Panther Posse work could have a profound impact on the future of Florida.

"They are going to be our voters in six years," Pires said. "There may be a governor right over there."

There are more than a hundred wildlife crossings across the state of Florida. Trail cameras installed at those crossings captured dozens of animals using the passage. Video shows a mama bear and her cubs, panthers, deer, alligators, and raccoons wandering through them.

With the crossings and miles of new fencing, the Florida Department of Transportation said panthers killed by vehicles "were down in 2019 and were down by over 30% from 2016," Zachary Burch the Government Affairs and Communications Manager for FDOT said. "With regard to M-CORES, FDOT will be providing draft paths/courses at an upcoming Task Force meeting. However, it is critical to note that, until a consensus is met by the task forces as it relates to guiding principles, any paths/courses produced will be very broad, completely undefined and should not be considered final in any way. As time progresses, the task force paths/courses will become more specific. This also applies to potential locations and designs for wildlife crossings along a proposed corridor."

In January, we got an up-close look at two panther kittens, Cypress and Pepper. Their time in the wild was over before it could even begin. The orphaned brothers were two weeks old when their mom was euthanized. She was found suffering from an unknown neurological disorder.

"I don't think everybody is aware of all the needs of the Florida panther or other species in Florida for that matter," Tiffany Burns, the Associate Curator at ZooTampa at Lowry Park, said.

Burns said the kittens are incredibly smart and curious. Neither showed signs of the condition that killed their mom. Her team nursed the kittens back to health and released to a wildlife sanctuary.

"Who knows what the future will bring. But, if we continue down the same path we've been on, the Florida panther is definitely in trouble", Burns said.

It won't be easy to save the Florida panther. But it is possible. Recently, biologists celebrated a significant victory for the species. A mom and offspring were spotted North of the Caloosahatchee River. Over the past 50-years, researchers said only a handful of female panthers had crossed over in search of new territory.

"Exciting news for Florida panther recovery," FWC Fish and Wildlife Research Institute posted on their Facebook page. "FWC and SFWS trail cameras photographed a female panther and a 4-5-month-old kitten north of the Caloosahatchee River in Lee County. Although adult male panthers have consistently been documented in central Florida, recent confirmations of females and offspring north of the Caloosahatchee marked the beginning of a new chapter in panther recovery efforts."

The project is in the public input stage, but each task force is expected to issue a final report by October 1, 2020. According to the M-CORES website, "FDOT will then perform a project evaluation according to its own rules, policies, and procedures. If feasible, construction is expected to begin no later than December 31, 2022."

FDOT asks for the public's input on the roads via email, FDOT.Listens@dot.state.fl.us, or the M-CORES website.