By: Paul LaGrone items.[0].image.alt From busy highways to bus routes, from downtown trolleys to the Cross Bay Ferry, the evolution of transportation in Tampa Bay is kind of like the traffic itself: slow to change and sometimes stuck. 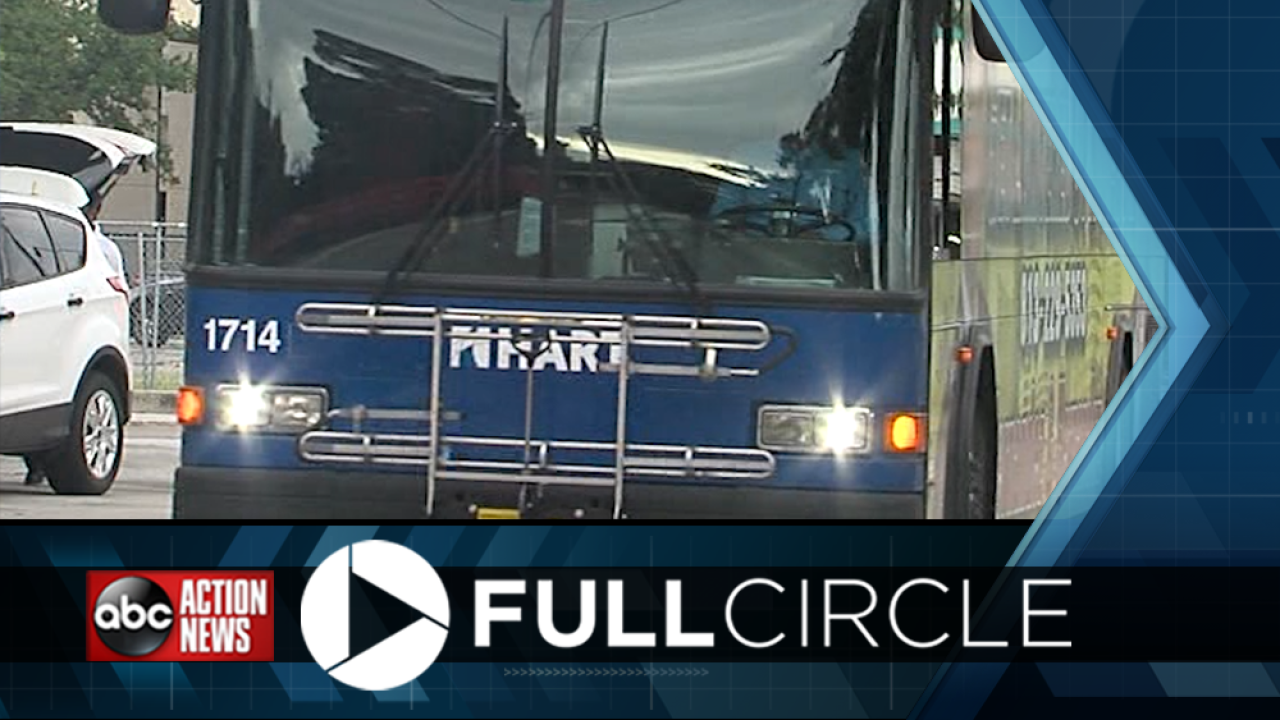 TAMPA, Fla. — From busy highways to bus routes, from downtown trolleys to the Cross Bay Ferry, the evolution of transportation in Tampa Bay is kind of like the traffic itself: slow to change and sometimes stuck.

The reality is, Tampa Bay, for a metro area of it's size, has one of the worst and lowest funded Public Transportation Systems in America. And whether you spend your time stuck in traffic, waiting 90 minutes for a bus, walking on roads that don't have sidewalks, or biking on streets that have some of the highest rates of pedestrian deaths in the nation, the ailing transportation Infrastructure affects all of us in a personal way, not to mention we are paying for it with our tax dollars.

ABC Action News cameras were there as residents urged transportation leaders with the Pinellas Suncoast Transit Authority not to cut the bus routes they depend on.

"If you eliminate that corridor I don't know what I'm going to do, I can’t get to working at 6 o'clock in the morning," says Robin Shaw, who can't drive because of physical difficulties. Shaw calls her fellow bus riders her "Bus Family."

Sarah Rosato, who lives in Safety Harbor, told the PSTA board that if her bus route is cut, it would essentially leave people stranded. "We have disabled people, we have people who have hearing impairment, legally blind, that depend on DART," says Rosato. "If this occurs it’s going to be catastrophic," she warns.

Chase Howell, who balances working a job and going to college, pointed out the biggest problem with public transportation in Tampa Bay: it is far and few in between. "When that bus comes at about 4:30 where I work, if I miss it, the next bus comes in an hour and a half," he says.

Despite the desperate need for Public or Mass Transportation for thousands of people in Tampa Bay, there is a lingering problem in making the case for investing the millions or even billions of dollars to build a lasting transit infrastructure. It is as much of a practical problem, as it is a public relations problem.

Recent headlines reporting that bus ridership has ebbed and flowed, but has also dropped from year to year, in Pinellas and Hillsbrough County.

We looked at the numbers going back five years in Pinellas County, March 2019 compared to March 2015. Revenue producing ridership is down 21 percent. That is nearly 1.4 million less passenger trips.

Brad Miller is the CEO of the Pinellas Suncoast Transit Authority. "Transportation is changing like no other time in our past," he says.

"We have invested over the years in a great system of major highways in a Tampa Bay region, that are filling more and more everyday. What we haven't done, is invested in a transportation network other than the people who have no other choice, can really rely on," says Miller.

To put it another way: The people who rely on public transportation are the customers the PSTA needs, but it's the future professionals who choose to use mass transit, and who choose to give their car a rest, that the PSTA wants.

"What public transportation can do is provide an alternative so that today, your commute is 20 minutes, in 25 years you will still have an alternative to get to your job or where you need to go in 20 (minutes)," says Miller, who rides the Bus himself several times a week to speak to riders and get a sense of what they need and want.

Still, Miller has the seemingly impossible task of expanding transportation options in a car culture, urban sprawl Metro that is Tampa Bay. And he's trying to do it, while running the lowest funded transit system of its size in the United States. Those two competing realities have forced the PSTA to consider cutting bus routes.

"As a rider myself and knowing how important it is in the community just hearing those stories of how important, nobody wants to reduce the transportation options," says Miller.

The Politics of Transportation:

The road blocks slowing down investment in a mass transit system in Tampa Bay go far beyond money.

Political disputes have exposed fault lines between the elected officials and the people they represent. Nowhere is that conflict more pronounced than in Hillsborough County, where last November voters passed the Transportation Sales Tax to help pay for a mass transit system, only to have it blocked by County Commissioner Stacy White, who filed a lawsuit.

Paul LaGrone:
Why did you sue?

Stacy White:
I believe strongly that it's unlawful and that it's inconsistent with what general law allows.

In the lawsuit, Commissioner Stacey White argues that the Transportation Tax is unconstitutional because it takes power away from the elected board of county commissioners and creates an independent committee — with no oversight — which then decides how to spend hundreds of millions of dollars in sales tax revenue for everything from roads, to buses, to light rail.

Stacy White:
Neither. My issue is with the independent oversight committee which on its face is unlawful.

Paul LaGrone:
Have you had people criticize you for this?

Paul LaGrone:
What do they say?

Stacy White:
That I'm holding things up. That this is just political. That I'm just doing it because I don't like the tax.

White's lawsuit is one of two against the transportation tax. As the legal battles drag on for months... Costing taxpayers thousands… State records show *millions of dollars from the sales tax piling up in a bank account… unspent and unused. While the money can't legally be spent until 2020, there's no guarantee the legal challenges will be settled by then.

Paul LaGrone:
Are you standing in the way if the will of the people?

Stacy White:
I'm not.
Me as a county commission, I'm directly accountable to the voters.
That's not the case for the members of this oversight committee.
I want the rule of law to win the day.

The Conflicts of Power on Both Sides of the Bay:

Meanwhile, the conflicts of power are playing out on the both sides of the bay.

Last month, city leaders in St. Pete Beach filed this resolution accusing the Pinellas Suncoast Transit Authority of misrepresenting the city in federal grant documents, when, according to City Manager Alex Rey, the PSTA claimed the city had agreed to contribute 1.5 million dollars to help pay for 60 foot buses.

Alex Rey:
They submitted that in the grant application but did not get our approval to get that done.

Paul LaGrone:
They didn't get your approval?

Alex Rey:
Or commitment for the 1.5 million.

Mayor Al Johnson says the PSTA has misrepresented the city before.

Mayor Al Johnson:
For a year or more we had been seeing that stuff in the documents when they went after the federal grant money they were trying to get and I’d sit down with the city manager's predecessor and I’d say you know, have you seen this?

So the two of us are looking at each other, going well we don’t have that in the budget, and we certainly are not going to write them a check, so we knew there would be some discussion there. We were going no.. first of all we can't afford to put money into this, second we don't like 60 foot buses.

ABC Action news obtained an email from the PSTA to Mayor Johnson in which the agency acknowledges the city did not agree to the 1.5 million dollars and promises to "adjust all grant documents and other assumptions to show no direct financial funding from the city."

PSTA CEO Brad Miller says the agency has since come to a working agreement with the city. "We have recognized their concerns, we have adjusted our project with smaller vehicles, we no longer are seeking any funding from them," he says.

To their credit I think PSTA has listened to us," says Mayor Johnson.

"We got their attention, and they seem to be extremely cooperative," he says.

The PSTA has also agreed to delay cutting bus routes, while the agency tries to find 5 million dollars in new funds by July.

If they can't find the money, the cuts could be back on the table.

Meanwhile, Commissioner Stacey White's lawsuit against the transportation tax faces a critical court hearing on Friday, when a judge could decide if the case moves on.