Full Circle: What's in your water and where does it comes from? 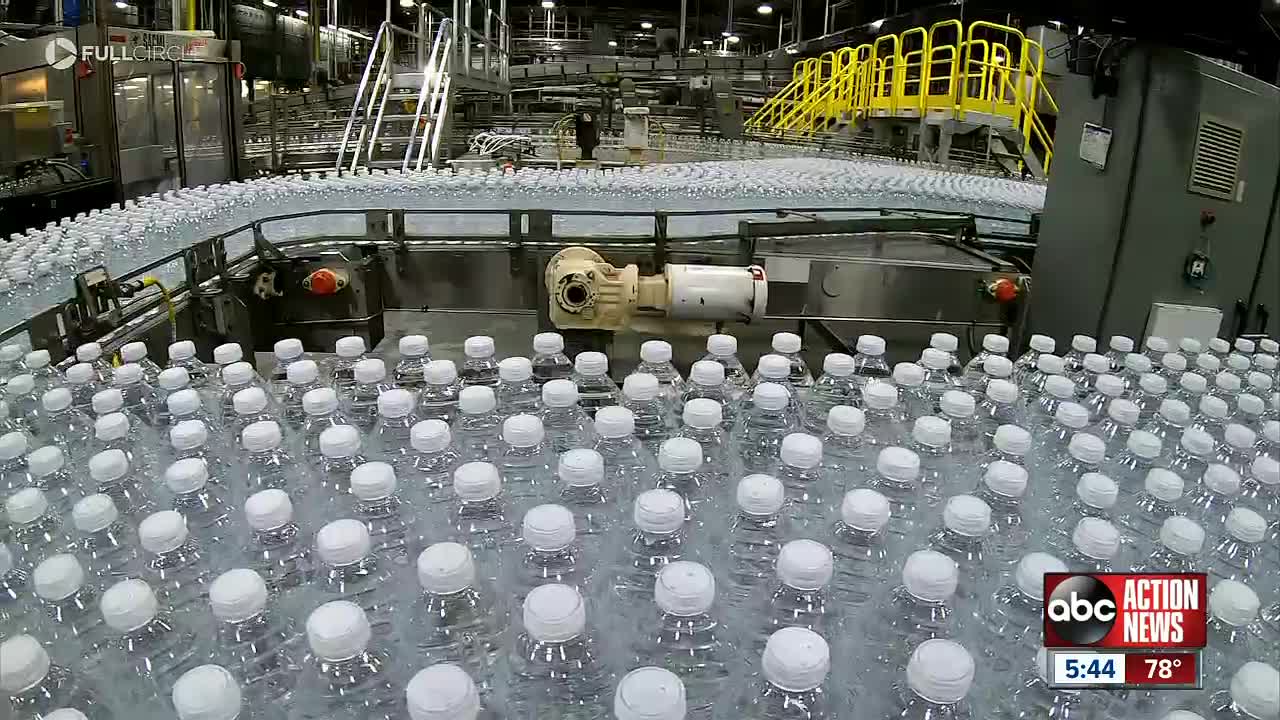 It’s essential to life. But, do you really know what’s in the water you're drinking? 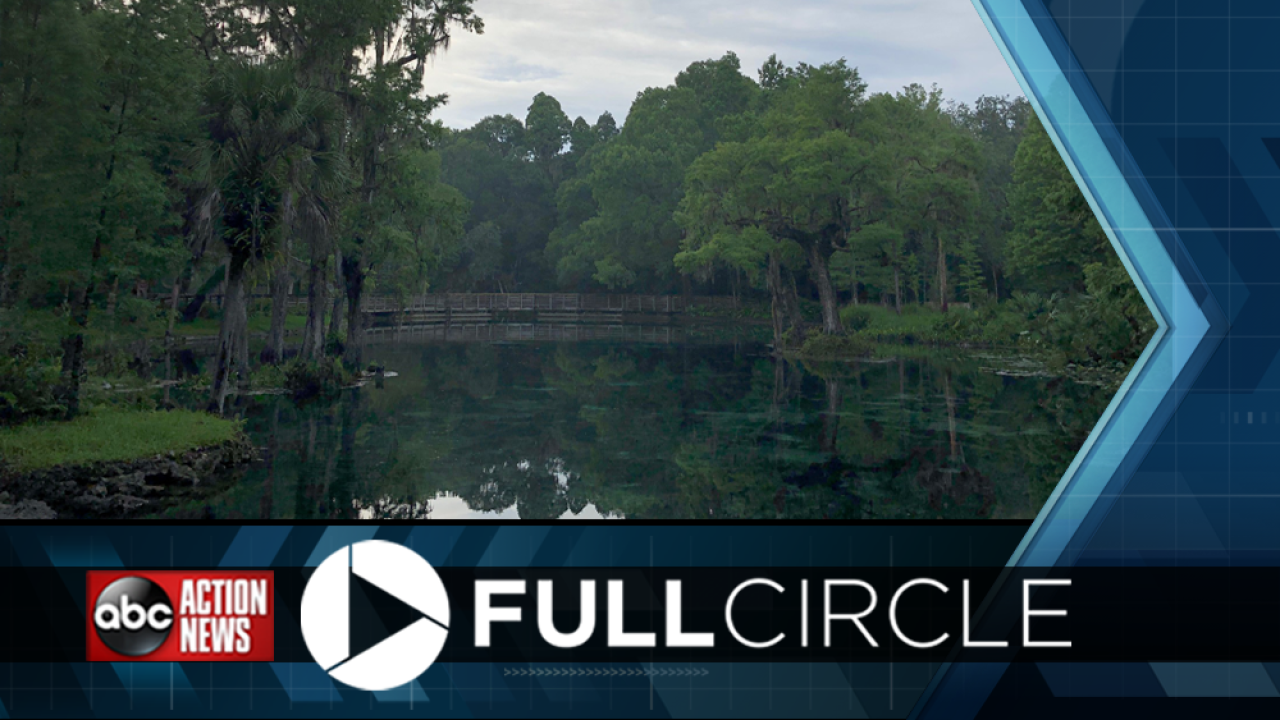 NEW PORT RICHEY, Fla. — Water. It’s essential to life. But, do you really know what’s in the water you're drinking?

ABC Action News reporter Kylie McGivern traveled across the Tampa Bay area to take a Full Circle look at where our drinking water comes from, efforts to keep is safe and the debate over bottled versus tap.

Since becoming a mom, Julianna Hirsch puts extra thought into the water she chooses for her family.

“For us, it’s probably one of the most important things that we buy,” said Hirsch, who lives in New Port Richey.

Hirsch turns to bottled water for drinking and cooking.

“Water is probably one of our bigger grocery expenses,” said Hirsch. “We probably go through four cases a week I would think, of bottled water.”

Across the country, water bottle sales increased nearly 9% last year to $18.5 billion, according to the International Bottled Water Association.

The increase comes after the Flint, Michigan water crisis, which started in 2014, exposed people to dangerous levels of lead after the city switched its water supply. The public health crisis heightened national awareness about the safety of our public drinking water.

In its most recent report, the Natural Resources Defense Council, a non-profit environmental organization, named Florida as the second worst state in the country for drinking water. That’s based on the number of people served by water systems with federal health violations.

At the time, the I-Team found the majority of Florida school districts do not test for lead on campus. But a bill to require water filters didn’t pass in Tallahassee this legislative session.

“I think that that’s super alarming as a mom. Often times I go in the grocery story and I’m not sure what I can buy, because I don’t know if I can trust where it’s coming from and if it’s going to be a safe, clean product for my kids,” said Hirsch.

Zephyrhills spring water was not among those named in Consumer Reports’ findings.

How Zephyrhills water is bottled

ABC Action News traveled to Zephyrhills to get a behind-the-scenes look at what goes into the water that ends up on store shelves. Zephyrhills draws water from Crystal Springs to bottle.

“It’s, on average, about 30 million gallons a day of water flowing out of that vent,” said George Ring, Nestle Waters’ Natural Resource Manager for Florida, pointing under water.

Ring explained, unlike groundwater, spring water has a specific definition to it.

“Spring water has to be a natural source, coming up to the surface in a natural form. You can't force it up,” said Ring.

Crystal Springs has been used to bottle water for 55 years. It’s one of six springs the company uses throughout Florida to bottle Zephyrhills water.

“You can absolutely be assured that the water in Zephyrhills comes from a natural spring in Florida,” said Ring.

But that’s just the beginning. The water then makes its way over to the bottling factory, where Dave Sommer, Nestle Waters Vice President of Technical & Production for the southeast region, explained the process.

“We go through our rigorous quality process, we manage and monitor our filtration, our hourly checks, and we make sure that every drop that goes into a bottle is safe to drink for everybody,” said Sommer. “I know every bottle that comes out of this facility, I can take home to my two children.”

Sommer said, for them, the most important message is encouraging people to drink more water all around, whether it’s bottled or not.

“We want people to drink more water, so we really want to kind of create that healthy hydration options,” said Sommer, noting the trend of people steering away from more sugary drinks.

“If you're drinking the water and you don't know where it comes from, that's kind of like eating unwrapped Halloween candy,” associate professor Jeff Cunningham said.

Cunningham researches water treatment and groundwater contamination at the University of South Florida.

“I think there is just sort of a lot of urban myths, you know, people don’t really know a lot about where water comes from,” said Cunningham.

One of those myths, Cunningham said, is that bottled water is somehow better than tap water.

“I personally don't see the need to spend a lot of extra money to buy water that comes in a plastic bottle,” said Cunningham. “Spring water and ground water are pretty much the same thing. Ground water is accessed by a well, spring water comes up to the surface naturally."

Cunningham pointed out that any municipality should be able to provide a report on its drinking water quality, but the companies behind bottled water are not required to publicly report those details.

Another difference is, chlorine is often used to kill pathogens in tap water. Because of that, there are low amounts of trihalomethanes. At high levels, they have been associated with cancer.

“It is definitely worth the one-in-a-million risk of cancer to ensure that the water is free from harmful pathogens,” said Cunningham.

So what about the differences in mineral water, versus, say, distilled water?

“Mineral water just means water that’s got a little bit of salt in it. And that’s healthy and it tastes good. So if you take everything out through reverse osmosis or through distillation, and if you don’t put something back in, it’s actually not really suitable as a drinking water source,” said Cunningham. “So if you go to the grocery store and you buy distilled water or reverse osmosis water, that’s great to put in your clothes iron so you don’t gunk up your clothes iron, but don’t drink it.”

The Hillsborough River serves as on of three tap water sources, supplementing groundwater and sea water turned into drinking water.

When asked why people should trust their tap water is safe, Carden said, “We have over 500 locations that we sample from. Of the 500 locations, we end up having 70,000 samples every year be tested and certified by our lab."

“We’re 100% compliant. And that’s not a goal to be 100% compliant, it’s a requirement for us,” said Carden. “It’s very important, I take it very seriously, and everybody that works in the water industry, they know how much it means to everybody. It’s life.”

How to check your water

The Environmental Working Group, a non-profit, created an online database where you can search for your specific water utility, to see if it meets federal health standards. You can also contact your water utility directly for the latest testing results.