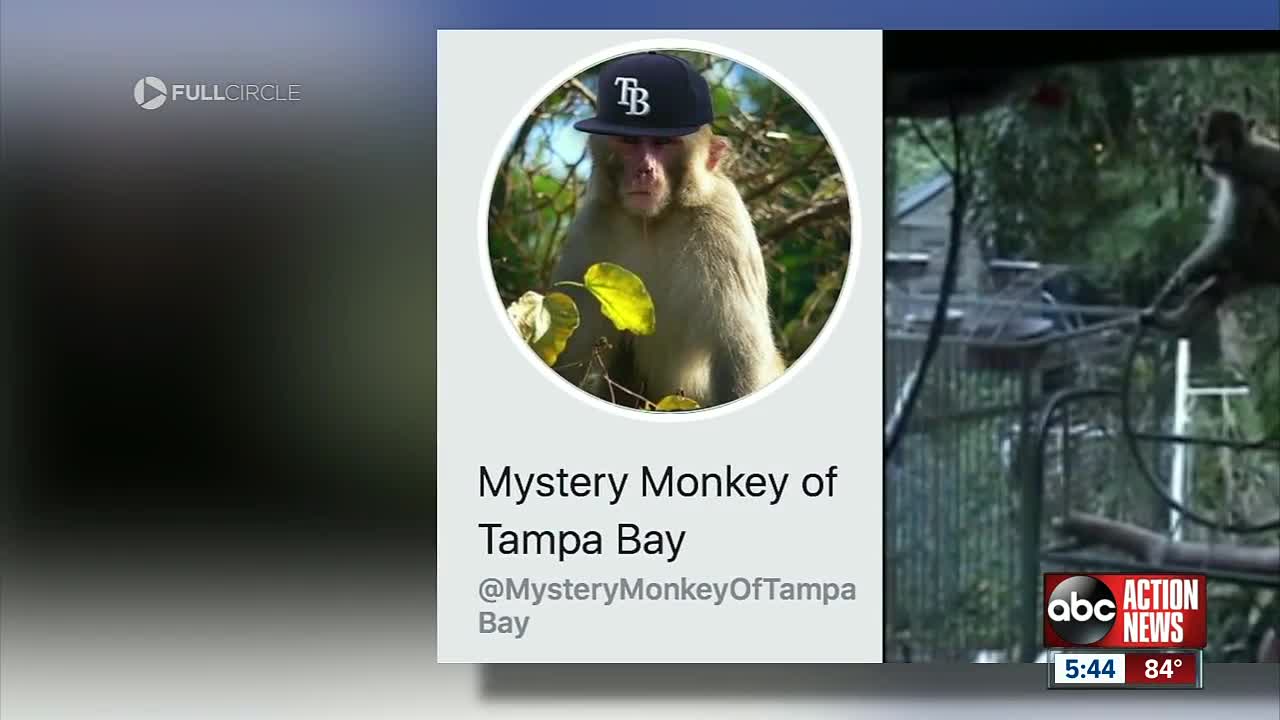 There are more than 200 rhesus macaques living in the forests and along the riverbanks of Silver Springs State Park. According to a newly published study, 30% of those monkeys carry herpes B, a virus that can be deadly if contracted by humans. Full story: http://bit.ly/2Vi2i2g 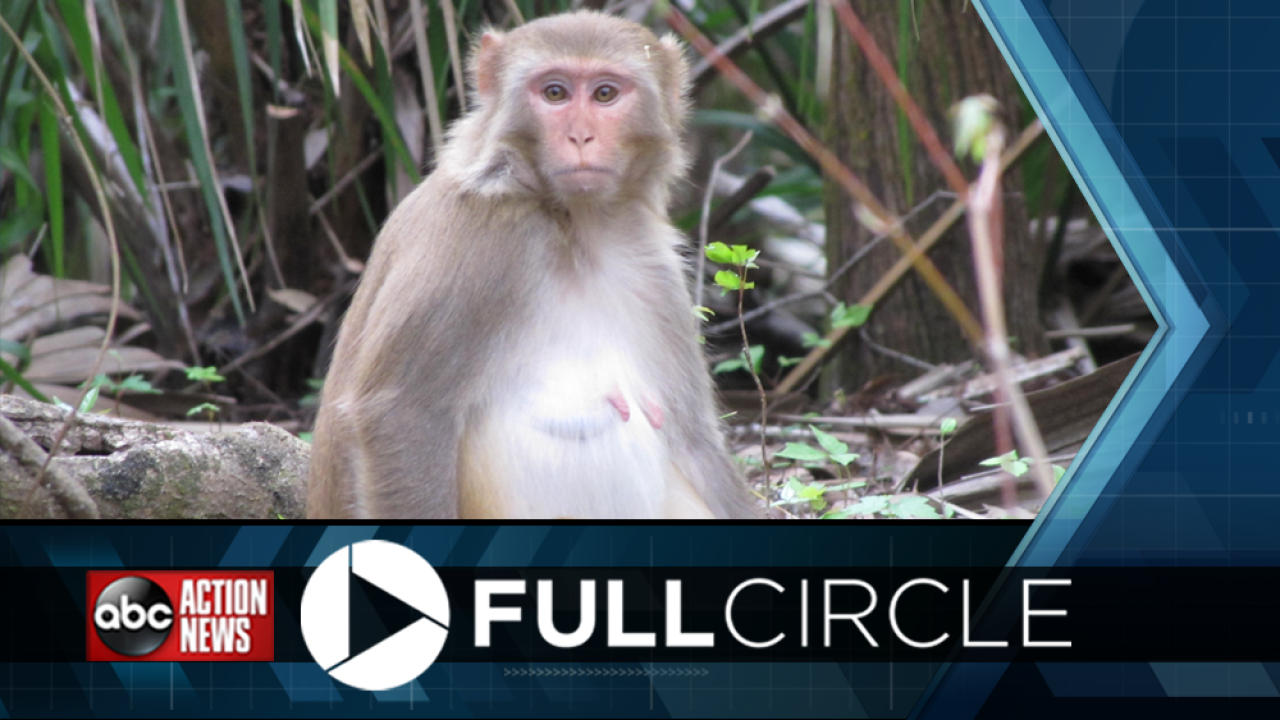 There are more than 200 rhesus macaques living in the forests and along the riverbanks of Silver Springs State Park. According to a newly published study, 30% of those monkeys carry herpes B, a virus that can be deadly if contracted by humans.

Silver Springs State Park is one of Florida’s oldest attractions. The crystal clear waters from the artesian spring draw in thousands of people every year. Silver Springs Park has been a natural landmark since the 1870s. Kayakers, hikers, and glass bottom boat tours give wildlife lovers a front row seat to one of Florida’s most beautiful ecosystems.

What does Full Circle mean?
At ABC Action News, we believe there are more than two sides to every story. When you see a Full Circle story, you'll find in-depth story telling that goes beyond the headlines. Expect more perspectives to give you clear understanding and access to places you rarely see.

Since 1938 visitors started coming to the park for something other than manatees and alligators.

A boat captain by the name of Colonel Tooey released a group of six monkeys as a tourist attraction.

The idea was to create an African jungle cruise. Tooey overlooked one crucial detail about the monkeys; they were excellent swimmers. The six monkeys Tooey put on an island in the middle of the river escaped. Tooey purchased six more rhesus macaques, and over time the population formed many monkey troops containing 40 to 50 monkeys.

“These rhesus macaques are survivors,” Dr. Steve Johnson said. “They are the most widely globally distributed non-human primate — they are smart, they adapt.”

Johnson is an associate professor in the Department of Wildlife Ecology and Conservation at the University of Florida. He co-authored the research report released in the Journal of Wildlife Management. His Ph.D. student, C. Jane Anderson, was the lead author.

“I told my student when she said ‘hey I want to work on these monkeys’ I’m like oh boy, OK,” Johnson said with a smile. “We would put ourselves at risk of potentially contracting this virus. We couldn’t take chances. We put ourselves at great risk to try to learn more about the monkeys so we could provide information to the state for management purposes. They can be aggressive, and you don’t want to anger those monkeys.”

The 2015 study estimated the population of monkeys would double to 400 by the year 2022 without management intervention.

During the study, scientists also learned 30% of the monkeys carry herpes B.

“A very small percentage of them shed a potentially lethal herpes virus it’s very low incidence in the population, but the consequence is very dire if someone was to get bit or scratched and contract that herpes virus,” Johnson said.

According to the Centers for Disease Control and Prevention, “B virus infections in people are rare. Since B virus was identified in 1932, only 50 people have been documented to have infections; 21 of them died. Most of these people got infected after they were bitten or scratched by a monkey, or when tissue or fluids from a monkey got on their broken skin, such as by needle stick or cut. In 1997, a researcher died from B virus infection after bodily fluid from an infected monkey splashed into her eye.

“The virus can be transmitted by splashing of body fluids from the animal to the human especially if the infected fluid landed on the human eyes, mouth open, wound,” Dr. Sally Alrabaa said. “You don’t mess with monkeys in the wild.”

Alrabaa is an associate professor of medicine at USF Department of Infectious Diseases.

Even with modern treatments, Alrabaa said the mortality rate for the virus is 20%. Without treatment, Alrabaa said it leads to certain death. Survivors can suffer permanent debilitating side effects.

“A paralysis, or seizure disorder, memory problems or even personality changes because the virus sometimes goes to what we call the temporal lobes that’s where the emotions and things like that are,” Alrabaa said. Symptoms of the virus are similar to the flu.

“Headaches, nausea, just not feeling well,” Alrabaa said. “Tingling in the hands and feet because the virus likes to go to nerves. The final stage is when it actually attacks the nerve cells cause the nerve damage and the nerve death.”

Odds of contracting the virus?

Videos showing encounters between humans and monkeys at Silver Springs Park have gone viral (no pun intended). In February, one couple said they were walking on the boardwalk when another visitor to the park came running towards them.

“She says ‘there is a monkey chasing me’ and I look at her and I’m like is this woman crazy?” Jc Castillo said. Seconds later Castillo saw a monkey walking towards him and started recording.

“As soon as he turns around and looks at me he starts charging,” Castillo said. “So, I turn around, and I start running.”

Castillo’s girlfriend was behind him and already in a full sprint.

“I’ve never seen her run that fast,” Castillo said with a laugh.

“I was really freaked out cause I knew they had diseases. So, I was panicking, and I didn’t know what to do,” Janee Masciarelli said. “They were shaking branches and getting mad. It was scary in the moment it was one of the scariest moments of my life.”

Surrounded by 40 to 50 monkeys Castillo and Masciarelli said they just wanted to get out of there.

"It was crazy, and you really don’t know what to do when something like that happens it seemed like a scene from Jumanji,” Castillo said.

According to biologists, there are no documented cases of anyone contracting the virus in the wild, only in lab settings.

According to the CDC, “hundreds of bites and scratches occur every year in monkey facilities in the United States, but people rarely get infected with B virus. A study of more than 300 animal care workers showed that none had B virus infection, including the 166 workers who had possible exposures to monkeys.”

Rhesus macaques have been spotted from Ocala to Tampa to Key West. Biologists said rogue males would leave troops to establish their own family groups. ABC Action News reporter Michael Paluska asked the Florida Fish and Wildlife Conservation Commission (FWC) and Department of Environmental Protection what the plan was to control the monkey population.

A spokesperson for DEP sent us this statement:

The Florida Park Service is committed to ensuring visitor safety, providing high-quality visitor service, and protecting the natural resources located within the park. Since our parks and trails are natural environments, visitors may encounter wildlife. The Florida Park Service posts signs and flyers to educate visitors about wildlife and remind them to keep a safe distance, and not to feed them or try to touch or capture them.

Park staff also survey public use areas during morning safety and maintenance checks before visitors arrive. Park staff may temporarily close areas if monkeys are spotted during these checks.

FWC recommends that same precautions implemented within our park be exercised by the public if they encounter monkeys outside of the park boundaries:

• Avoid contact and observe only from a safe distance.

• People should NOT APPROACH OR FEED rhesus macaques.

• Adults should supervise children and pets when outside.

The department continues to coordinate with the Florida Fish and Wildlife Conservation Commission (FWC) to ensure that visitors are able to safely enjoy this beautiful park.

If visitors encounter an aggressive macaque monkey or any other wildlife, they should contact FWC immediately.