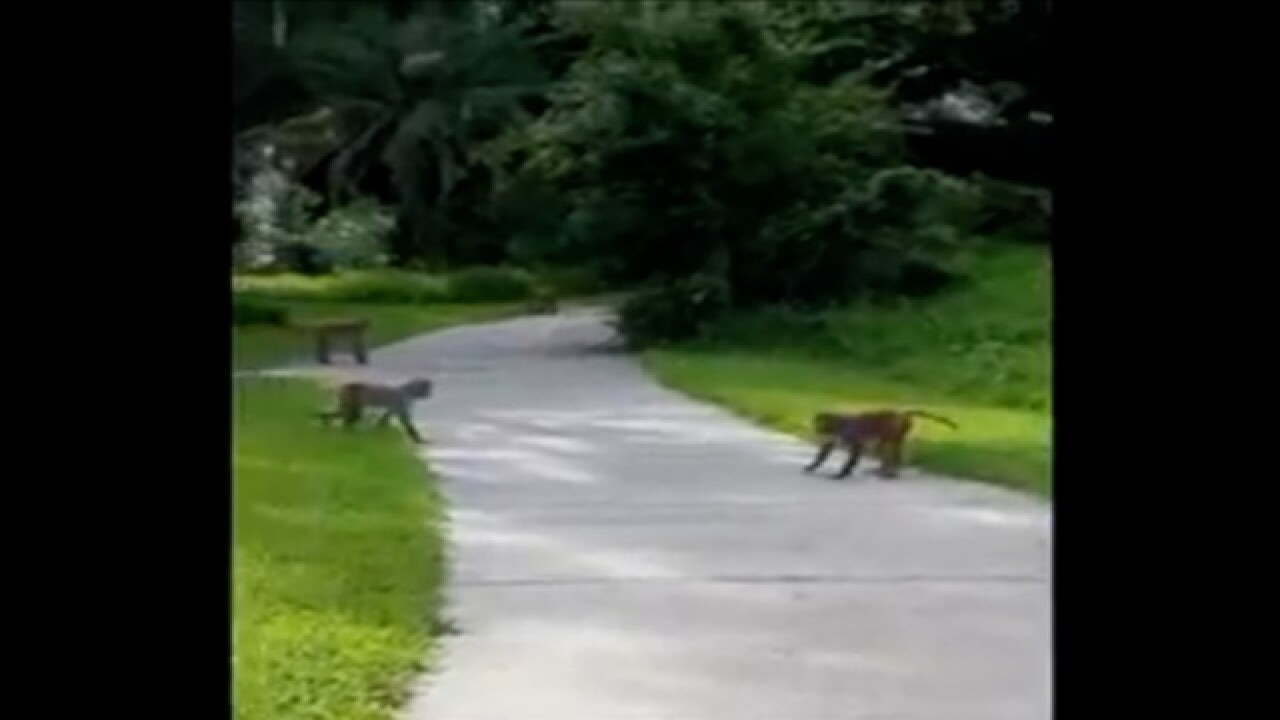 A visit to a state park in Florida turned scary for a family from Estero. Susie Ramsey and her family were visiting on June 29 when they came across a group of wild rhesus monkeys.

That population has grown to roughly 200 monkeys. University of Florida biologists say new sightings of the monkeys have been reported in Lady Lake and The Villages, more than 20 miles south of the park.

Biologists fear as the population grows, they would not be surprised to see males disperse outside of the Ocala area.

Ramsey and her family came across the troop of monkeys at the Sea Hunt exhibit.

In a video posted on YouTube, you can see at first the monkeys were just sitting around. However, just a few minutes later the monkeys became angry. They growled, hissed and started chasing people. Thankfully, no one was hurt.

Ramsey tells ABC Action News that she wishes the park would warn people about the monkeys.

"There's nothing anywhere telling you that you should be aware that they're there," says Ramsey, of Estero, Florida. "Because they're obviously very aggressive," she adds.

She says her family did not approach the monkeys, or try to feed them.

Attacks by monkey attacks can be serious. The animals have sharp fangs and are extremely strong for their size. They can seriously injure people.

If you spot a monkey in the wild you should never look directly into their eyes or smile with your teeth showing -- the animals consider such actions a sign of aggression. Just back away from them without showing fear and open your palms to indicate to them you are not holding some food.

Ramsey says the monkeys chased after her family even through they did not "look them in the eyes" or do anything aggressive towards the animals. She adds there should be a sign warning people wild monkeys live in the area. The state's park website also does not mention the monkeys there.

"The Florida Park Service is committed to ensuring visitor safety, providing high-quality visitor service, and protecting the natural resources located within the park.

Since our parks and trails are natural environments, visitors may encounter wildlife. The Florida Park Service posts signs and flyers to educate visitors about wildlife and remind them to keep a respectful distance from animals, and not to feed them or try to touch or capture them.

Flyers related specifically to the monkeys are posted at kiosks throughout Silver Springs State Park, with specific signage posted at the Ross Island Boardwalk and Sea Hunt Deck. Both of these areas of the park are currently closed due to recent increased monkey presence at these locations.

The Florida Fish and Wildlife Conservation Commission has been notified and is monitoring the situation. We will continue to coordinate with them to ensure that visitors are able to safely enjoy this beautiful park."

The rhesus monkeys are not native to Florida. They were first released onto an island as part of a former attraction in the park in the 1930s. The monkeys later swam off the island.

Watch the entire monkey attack in the embedded video below:

Information from the Associated Press was used in this report.