The men, all in their early 20s, pleaded guilty to two counts of misdemeanor hazing in the case of Andrew Coffey, a Pi Kappa Phi fraternity pledge who died of alcohol poisoning on Nov. 3. In total, nine fraternity members were charged in the case. The four men who did not plead guilty on Monday are scheduled to go on trial for felony hazing charges in June, according to ABC affiliate WCJB.

Conner Ravelo, Coffey's big brother in the fraternity, was the first to enter a plea on Monday, according to courtroom video. He was also the only defendant of the five who apologized to Coffey’s parents in the courtroom, the footage showed.

"I know that my words may not mean much and you may never forgive me, but they're words I need to say and words you need to hear. I'm sorry for not thinking. I'm sorry for not acting the way I was raised to act. I blindly did the same thing that I went through without thinking about the dangers," Ravelo said. "I recognize that what happened to Andrew could have happened to me or someone else and it wasn't a matter of if, but when.

“I can make a promise to you that moving forward I will be a part of the solution and not part of the problem,” he added. 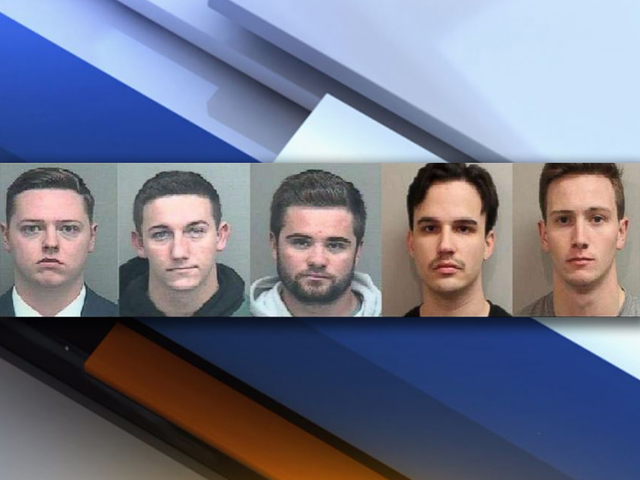 The men will be on probation for the next two years, which requires them to attend anti-hazing classes, write an apology letter to the Coffey family and speak about hazing when asked to do so. They must also abstain from alcohol and submit to random drug tests.

Coffey, an FSU junior, was found unresponsive after attending "Big Brother Night" with the Pi Kappa Phi fraternity. An autopsy found his blood alcohol level was .447, more than five times the legal limit to drive, according to The Associated Press.

According to grand jury testimony, a fellow pledge found Coffey unresponsive, but called other frat members instead of 911. Authorities weren't contacted for another 11 minutes, which experts told the grand jury could have cost Coffey his life.

Florida State University, a school of more than 41,000 students, suspended all Greek activities on campus in the wake of the death and Pi Kappa Phi's national office said it would close its FSU chapter.

The Coffeys filed a civil suit in February against Pi Kappa Phi and the nine men charged in connection with their son’s death.

“Our world has been rocked by this. There is not any normal for us; time will not heal our wounds. We are completely devastated by his death and the way in which he died,” the victim's mother, Sandy Coffey, said in court Monday. “Last year, four young men died while pledging a fraternity. This is not a coincidence. Fraternity hazings need to stop.”